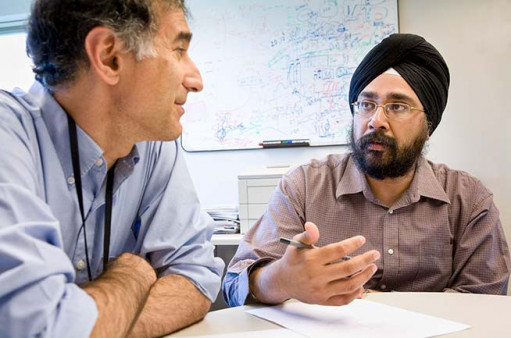 Our evolutionary history is not merely a record of where our species has been. It may well hold clues that could improve our future, according to work from scientists at Fred Hutchinson Cancer Research Center. The team showed they could use insights from the ancient tug-of-war between viruses and their hosts to evolve a better antiviral protein in the lab. The work was published today in the journal PLOS Biology.

“Previously, our labs have looked backward in evolution to reconstruct what had happened. Now for the first time we’ve demonstrated that we can also use the same rule and go forward in evolution and actually get even more potent antivirals,” said Hutch evolutionary biologist Harmit Malik, PhD, who co-led the project with fellow Hutch virologist Michael Emerman, PhD.

The insights also came with an unexpected twist. Emerman and Malik had expected that as the antiviral became better at blocking one virus, it would become worse at blocking others — a trade-off between potency and purview. But in many cases, the antiviral protein retained its ability to inhibit dissimilar viruses even as it improved its activity against one. They are now testing whether other antiviral proteins against human pathogens can also avoid this trade-off.

Viruses and their hosts — which range from people to plants to bacteria — have been locked in battle for millions of years. If a virus feints in one direction, its host must parry or perish. Over time, each helps shape the other’s evolution. Could a deeper understanding of this relationship hold lessons that could help shape an antiviral protein going forward?

Emerman, Malik and then-graduate student Rossana Colón-Thillet, now a postdoctoral fellow in the lab of Hutch colleague Keith Jerome, MD, PhD, decided to address this question by altering an antiviral protein called MxA. Variants of MxA are found in most primate species, including humans (which allows researchers like Malik and Emerman to trace how it has changed over millions of years of primate evolution). MxA is one of many antiviral proteins that block infection by interfering with the viral life cycle. After its target virus enters the cell, MxA binds to the virus and shuts down infection by preventing the virus from replicating itself.

Like all proteins, MxA is made up of a string of amino acids encoded in its gene. A gene mutation that changes one amino acid for another and improves protein function may be passed on to future generations. These kinds of changes usually occur at a rate dictated by how often mutations arise. But in arms races, a protein must respond to a fast-changing pressure, like an antiviral responding to a rapidly mutating virus. This forces amino acids in certain positions to break these evolutionary “speed limits,” Malik said.

Patrick Mitchell, PhD, a former graduate student mentored by Malik and Emerman, had previously identified the fastest-changing amino acids in MxA by surveying how the molecule had changed over time. The fact that the amino acids broke evolutionary speed limits suggested that they were changing to keep up with viral evolution and were therefore critical to MxA’s continued antiviral activity. Evolution had helped the team zero in on key amino acids — perhaps applying evolutionary principles to just those amino acids would also enable the scientists to improve MxA’s activity.

How to make a good antiviral great

To the researchers, MxA seemed like an optimal protein with which to test their hypothesis. It’s already very good at its job, blocking several very different types of viruses, including influenza. They reasoned that it doesn’t take much to improve on mediocrity; improving on excellence would really show the power of their approach.

“It’s a stringent test: If you can take something that’s really, really good and you can make it better,” Emerman said.

They decided to put human MxA through its paces against Thogoto orthomyxyovirus, or THOV, a virus that infects ticks. As part of its life cycle, THOV passes from a tick to a vertebrate host, including sheep and rodents. Only a couple of human THOV infections have been recorded, which might be explained by the fact that human MxA is the most powerful THOV antagonist yet discovered in mammals.

Colón-Thillet focused on five amino acids in a specific loop of the human MxA protein. She and her colleagues systematically substituted every possible amino acid at the five positions, which included new combinations never seen in nature. Then, she tested the new versions of MxA against THOV.

The team saw that some changes, as expected, hobbled MxA function. But some improved its ability to block, or restrict, THOV. The super-restrictor version of MxA, which is 10 times more potent against THOV than the original MxA, required just two amino acid changes.

The team discovered that these potency-boosting amino-acid changes needed to occur in combination, not one at a time, Emerman noted.

“If we had done it by changing amino acids one by one, we would not have found the best ones. It required combinations that we could not predict based on gene sequence or protein structure alone,” he said.

That’s because sometimes two changes that individually diminished its virus-blocking ability counterintuitively enhanced MxA function when they occurred together.

The team knew that the same loop region and amino acids that MxA relies on to restrict THOV are also critical to its ability to stave off the flu. So, Colón-Thillet also tested improved versions of MxA against influenza.

As it turns out, this is not always the case. Unexpectedly, some of the THOV super-restrictor MxA variants that Colón-Thillet created remained a potent influenza adversary. “Even though it’s contacting two very different viruses it’s able to accommodate both of them at the same time,” Emerman said.

Both Malik and Emerman study viruses and their hosts to answer fundamental questions about biology and evolutionary processes. This work also helps to explain how MxA can restrict a wide range of viruses, Malik said.

He believes that the insights from Colón-Thillet’s work will be applicable to other genes whose functions scientists hope to improve. The next step will be to engineer a method to deliver antiviral activity that has been improved through this kind of directed evolution, Malik said.

The team is currently testing similar evolution-guided strategies to create more potent antiviral genes against HIV-1. However, it won’t be easy to figure out how to translate the strategy into a medical application. Perhaps future scientists could use these principles to develop a gene therapy that makes evolution-guided tweaks to a patient’s antiviral genes, or perhaps scientists will one day design a virus-blocking drug that mimics how an evolutionarily “improved” antiviral protein might function, Malik and Emerman speculated. However, such applications would be far in the future. The team finds today’s evolutionary lessons even more exciting.

Their evolutionary studies had identified the minimum set of amino acid sites needed to improve antiviral protein function, and manipulating just those sites allowed them to achieve a leap in potency, Malik said. “I’m really hopeful that … this strategy is going be something that would be applicable to any antiviral or any anti-pathogen gene.”

This article was originally published on October 1, 2019, by Hutch News. It is republished with permission.