Adam Hayden with his son Isaac Courtesy of Adam Hayden

Adam Hayden is a 36-year-old philosopher, advocate and writer who lives in Indianapolis with his wife and three sons. His blog, Glioblastology, is featured on CancerHealth.com.

I had my first seizure the day after Christmas. I got dizzy, felt pins and needles on the left side of my body and had to lie down. After a couple minutes, the feeling subsided. I explained it away as stress.

I had a second “episode.” My general practitioner began a process of elimination but couldn’t diagnose anything. After a third episode, my doctor referred me to a physical therapist, in case it was caused by a pinched nerve or bad posture. A different doctor later told me, “If there were something seriously wrong, you would be in much worse shape.” This prolonged my not pushing for a satisfactory diagnosis. I was still working full-time and pursuing my master’s degree at Indiana University-Purdue University Indianapolis.

My seizures increased in frequency and duration. A very severe one on my commute home caused complete left-side paralysis, and I lost some vision. I managed to steer myself into a gas station and made a doctor’s appointment for later that week.

My doctor was giving me a neurological exam when she said, “We need to get you in an MRI today.” The radiologist’s report revealed a 71-millimeter mass in my right parietal lobe.

We made an appointment with a neurosurgeon, who said, “I can’t believe the person I’m talking to is the same person I saw in those scans.” I was really high-functioning, given the size and location of my tumor.

We scheduled awake brain surgery for May 26. Keeping me awake helped ensure I was responsive to commands, to minimize damage to healthy tissue. Eventually, my surgeon reached a point where he could either try to remove more of the tumor, risking permanent left-side paralysis, or he could stop, protecting more motor function but leaving more tumor in my brain. I elected to preserve more motor function. I still had pretty significant motor impairment on the left side of my body and went directly to inpatient rehab for intensive therapy.

In June, I received an official diagnosis of glioblastoma. The following month, I was discharged from inpatient rehab and started daily radiation and chemotherapy. I had to take incompletes in three classes and couldn’t finish my master’s degree, but I was open with my professors about my treatment, and they granted me extensions. 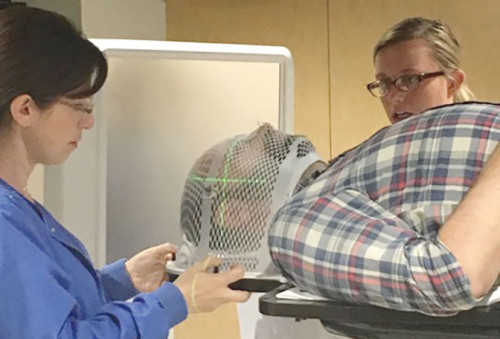 Daily therapy became monthly chemotherapy. The standard treatment protocol for glioblastoma is six months of chemo cycles; I did 11 months altogether, with regular MRIs for monitoring.

I was studying the philosophy of science, so I wanted to know more about the theories behind what was happening with my body. I started my blog, Glioblastology, to write about what I learned.

Our family had moved in with my parents for extra support. I was posting on the blog and active on social media, which led to my first public address at a local community center. I talked about relatable experiences, like my kids seeing me in the hospital and our doctor hugging my wife, Whitney, and me when she gave us the MRI report.

The success of my talk made me think I could contribute to something bigger than me. I looked for a place where my research background intersected with patient advocacy, and the National Brain Tumor Society (NBTS) resonated with me.

Whitney and I attended the annual NBTS Head to the Hill event in Washington, DC, where members of the brain tumor community meet with our congressional representatives. Whitney quickly learned the importance of her voice as a caregiver. We’ve been married for nine years and have three kids—even in perfect health, that’s a lot of stress. Our care partners face an added burden that’s important to recognize.

I finished my last chemo cycle and moved from active treatment to MRIs every eight weeks, later extended to every 12 weeks. A year after my planned graduation, I earned my master’s degree.

Liz Salmi and Bethany Kwan started the Brain Cancer Quality of Life Collaborative. I wrote a letter supporting Liz’s grant application, and Whitney joined as a care partner stakeholder. (See “Taking the Lead.") In December, NBTS invited me to a research roundtable with the Food and Drug Administration to discuss early clinical trials. The following month, my university awarded me the distinguished alumni award for my advocacy work.

I was accepted into the American Association for Cancer Research’s Scientist<—>Survivor program. I also attended Stanford’s Medicine X program and gave a presentation on patient storytelling. I’m comfortable being a communicator—I think this is why I was drawn to advocacy.

I gave a talk at the Indiana University School of Medicine Hospice and Palliative Medicine program and later spoke to a bioethics class for senior medical students. Whitney and I have taken a proactive approach to putting end-of-life affairs in order and working with palliative care. Having some plans in place has given us peace of mind. 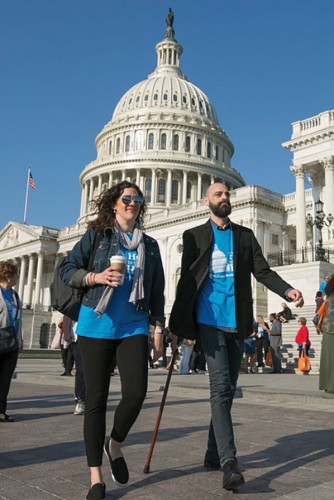 Adam Hayden with his wife Whitney, at the 2018 Head to the Hill lobby day.Courtesy of Adam Hayden

For the past six months, I’ve been a moderator for the Brain Tumor Social Media monthly Twitter chat. The personal connections I’ve made through social media and my blog make me feel like I’m really having an impact.

is the most common and deadliest type of brain cancer in adults. Brain tumors are usually difficult to treat, as many drugs cannot cross the blood-brain barrier to reach the tumor. In some cases, chemotherapy may be administered directly into the brain. Genetic testing can show whether a brain tumor has mutations that make it susceptible to targeted therapies, such as Vitrakvi (larotrectinib). Palliative care, which aims to reduce symptoms and improve quality of life, is an important component of care for many people with brain cancer.