In the fall of 2017, I was 32 and happily married. I had been working as an elder-law attorney. My background was case management for vulnerable populations, and I loved my job. My husband and I had just moved from New York City to the suburbs with our toddler, Felix, and we were trying for a second child.

But ever since Felix’s birth, I’d been suffering from back pain. I’d seen five doctors, and each one chalked it up to being a new mom and the strain that goes with lugging around a small child. I took their advice and tried physical therapy, yoga and weight loss. Nothing worked. The pain got worse.

Finally, during a physical, my primary care doctor found a lump deep in my right breast. One thing led to another, and in early November, the same week Felix turned 2 and my husband and I celebrated our fifth wedding anniversary, I was diagnosed with breast cancer. A few days later, I started a blog, Beyond the Pink Ribbon, and wrote about that moment: “I wept: full-body, heaving, shaking, guttural sobs at the turn my life had just taken, in that very pivotal moment. The room felt simultaneously so small, and so large.”

Because of my age, my doctors assumed they’d caught the cancer early, but the back pain gave me pause. My intuition told me to seek a second opinion.

I sought a second opinion at one of the top cancer centers in New York, and my PET scan showed cancerous lesions on my hip, spine, rib and sternum. My breast cancer was Stage IV, metastatic. I collapsed in my husband’s arms and cried. Because my cancer was estrogen-receptor positive, I started hormone blockers right away. A few weeks later, I added a targeted therapy, two pills a day total, to slow the disease’s progression. In clinical trials, the drug had shown a lot of promise.

I was suffering from hot flashes, joint stiffness and fatigue—all side effects of the hormone blockers, which had put me into chemical menopause. My doctors thought my body might adjust better to full-fledged menopause, so I had my fallopian tubes and ovaries removed as well as my uterus and cervix. (In doctor speak that’s a salpingo-oophorectomy with total hysterectomy.) Even though I knew my diagnosis meant I shouldn’t have more children, the total hysterectomy hit me hard. I had wanted Felix to have a sibling. Instead, I refocused on being the best parent I could be.

I began broadcasting a podcast, The Intersection of Cancer and Life. I already had my blog but wanted to expand on conversations I was having with friends about what it meant to be living with cancer. I wanted to talk with survivors about whether their diagnosis affected things like fertility, relationships and parenting. I wanted to help them reclaim their narratives, to demote cancer from being the plot of their lives to being a character in their lives.

At the one-year anniversary of my diagnosis, my husband and I were really struggling. In the span of a year, our paradigm had shifted from two young professionals with a growing family to a metastatic breast cancer patient and the constraints that put on our energy, our future and our family. My coping mechanism was to isolate, which led to disconnection. There were days when I couldn’t even look at my husband and my son because all I could think about was losing them. To top it off, I was also going through menopause. My body looked different and felt different. And although I’d never considered myself particularly feminine, I found the loss of my reproductive organs difficult to bear.

My husband and I found our way into counseling, and it was incredibly helpful. Slowly, we learned how to find our way back to sexual intimacy. I’d already lost so much to cancer, I refused to spend the rest of my life not being sexual. I wanted that level of self-care, but I also wanted that level of deep connection with him. Yes, it was awkward, and yes it was painstaking. We had to be very deliberate and communicative. But, in the end, we figured it out. Reclaiming sexual pleasure for myself and my marriage feels like a radical act of resistance, survival and self-love. 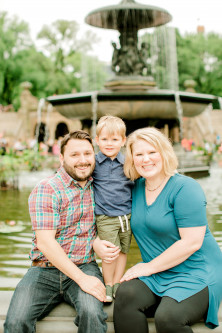 Emily with Christian and their son FelixKasey Lynn Photography

We discovered my targeted therapy wasn’t working, so my doctors and I decided to switch courses of treatment. I enrolled in a clinical trial for a drug that hadn’t come to market yet.

I had a brain MRI that led to the discovery of two small brain lesions, or metastases, and targeted brain radiation. The radiation was successful in that both lesions shrunk to the point where they became inactive. I wrote in my blog: “I have had to undergo an intense boot camp on compartmentalizing, accepting and not looking too far ahead.”

I found out my cancer had progressed to my liver and lung. The disease was no longer responding to the hormone blockers, so I started my third line of treatment, an oral chemotherapy drug. I swam competitively in high school and college, and the skills I learned as a distance swimmer are coming in handy. I wrote: “You have to take yourself out of the mindset of worry, outcome and the finish line. You’ve got to focus on the next step. Otherwise you’ll go crazy.”

I was having a little liver-area discomfort so my oncologist moved up the date of my PET scan. The scan showed significant liver progression as well as bone marrow involvement. Plus, my bone mets were acting up again. I wrote: “Everything was blowing up.” My oncologist, who is usually great about soliciting my opinion and giving me choices, said point-blank, “You’re starting IV chemotherapy this week.” Up until this point, I’ve been terrified of doing intravenous chemotherapy, but that’s where I was now. Luckily, she said there are many different types of chemotherapy we can try, so I was hopeful.

Switching from oral to IV chemotherapy has been emotionally and physically draining (my hair fell out…ugh), but the stronger drug therapy was apparently just what my body needed because, for the past few weeks, my tumor markers have been declining steadily. My doctor is very pleased with the direction things are going, and, although I’m tired from the chemo, I’m feeling hopeful.

Now I’m in the midst of starting a nonprofit aimed at assisting families with young children in which a parent was diagnosed with metastatic cancer. Every day I try to use my experience to create positive, long-lasting benefits for others. My goal is to create some good from this horrible diagnosis. “I refuse to let my mind live in the future. I only know what is true at this moment: I am here, I am alive and, despite my limitations, I am living a life that I value.”

Breast cancer ranges from Stage I to Stage IV, which is metastatic cancer that has spread elsewhere in the body. The brain, bones and liver are common sites of breast cancer metastases, or mets.

Treatment for breast cancer may include surgery, radiation, hormone therapy, chemotherapy, targeted therapy that works against cancer with specific characteristics or immunotherapy that helps the immune system fight cancer.

Breast cancer is classified according to the type of receptors it expresses. A majority of tumors carry hormone receptors. Estrogen stimulates breast cancer growth, and treatment often includes hormone-blocking medications. About 20% of breast cancers carry HER2 receptors and can be treated with HER-2 blocking drugs. Triple-negative breast cancer doesn’t express any of these receptors and is more difficult to treat.

Editor’s note: At press time in November, 2019, Emily’s cancer has progressed. It crossed into the fluid that bathes the nervous system and brain. She remains in treatment and continues to fight. Our thoughts are with Emily and her family during this difficult time. Update, March 31, 2020: Emily died in mid-March. Our condolences go out to her family.