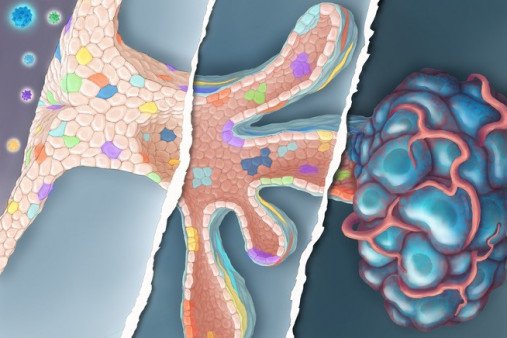 A Breast Tumor Might Have Thousands of Mutations. Which Are Important?

In support of precision medicine, a new method enables scientists to separate cancer-driving mutations from passengers.

By the time a tumor is detected, it’s riddled with mutations — but which are driving its development and progression, and which are merely along for the ride? That’s the question that scientists from Fred Hutchinson Cancer Research Center can now answer, thanks to their new method to screen breast cancer-associated mutations for their functional consequences.

“In breast cancer, for pretty much every single gene in the genome, there’s at least one patient with mutation in it. Sure, many of them or most of them are not going to matter. But a lot of them will,” said Beronja, who studies development of skin and related tissues like the lining of the mammary glands, and how defects in tissue development can underlie cancer.

If researchers can figure out which mutations are the ones that matter, they can begin the process of developing new treatments that target tumors carrying those mutations.

But to truly know what a mutation is doing in a tumor, scientists need to test its function in the most physiologically relevant system available. Ying and Beronja have developed a mouse-based model for functional and large-scale testing of patient-derived gene lesions in spontaneous mammary tumor development, in which genetic events that contribute to both tumor initiation and tumor progression can be investigated with great precision and in the context of intact tissue and normal physiology, they said.

Their method uses injections to introduce cancer-associated mutations into early mouse embryos and a cell barcoding method to track how mammary glands develop from stem cells. They used their system to screen more than 500 mutations that were suspected — but not confirmed — breast cancer drivers. The team identified 17 mutations that help accelerate cancer growth, some of which also changed the tumors’ molecular subtype.

And the strategy holds potential beyond cancer mutation screening, they said. Ying and Beronja were also able to use the DNA barcodes to track development of the complex branched tissue of mammary glands from their stem cell origins.

In the driver’s seat or along for the ride?

A propensity to mutation is one of the hallmarks of cancer. By the time we can detect a tumor, it’s already collected myriad DNA changes, from small, single-letter errors in its genetic alphabet to large chunks that have gone missing or been rearranged.

In this era of precision medicine, doctors hope to use the unique collection of mutations in a patient’s tumors to tailor their treatment to make it as effective as possible. But which mutations should an oncologist target? Which promote cancer cells’ growth and development, and which contribute nothing?

The Cancer Genome Atlas, or TCGA, a National Cancer Institute program that aims to chart the landscape of cancer-associated mutations, cataloged such genetic changes from 20,000 patient tumor samples across 33 tumor types. The TCGA data shows that almost 90% of breast cancer mutations are found in less than 5% of patients. To grapple with the volume of potential cancer-causing mutations in the TCGA, researchers turned to statistical models to weed drivers from passengers.

“As I started developing a cancer research-focused lab, I kept hearing about these cancer drivers, cancer passengers … I realized that a lot of those qualifications came from indirect experiments,” said Beronja, who started his career studying skin stem cells, the precursor cells that give rise to skin.

Because tumors grow in the context of other tissues, it’s best to learn about their development and progression within a living organism. Most of these cancer models are in special strains of mice — not the best proxies for human cancer, but leagues better than petri dishes.

Mouse models of breast cancer have certain drawbacks. Some use mice without immune systems — something our tumors must evolve to evade. Others rely on removing, modifying and transferring back cells, and therefore don’t mimic spontaneous tumor development.

Ying, a postdoctoral fellow in Beronja’s lab, had previously studied skin tumor development by introducing DNA mutations during early embryonic development using a strategy called intra-amniotic injection. That is, mutations are introduced via injection into the amniotic sac that surrounds the developing mouse embryo. He built off this approach to introduce not just mutations but also DNA tags called barcodes. These DNA barcodes allowed him to track the cells whose DNA he’d mutated.

Beronja and Ying don’t think their approach has solved every problem — for one, mice are still not humans. Also, most breast cancer-causing mutations are acquired later in life, whereas their approach introduces potential cancer-causing mutations while mice are still embryos. However, breast tumors in their model take about the same length of time to develop as those that develop in models where mutations are introduced to adult mice, Beronja said.

A functional understanding of cancer-associated mutations

Ying screened 520 breast cancer-associated mutations from the TCGA for their effects on tumor development. Most have been found in fewer than 5% of breast cancer patients, and most are in genes of unknown function. He tested them in the context of a known cancer-driving mutation in the gene PIK3CA, the most commonly mutated gene in breast cancer. This would tell him whether these rare mutations — commonly found in cancer cells that also have altered PIK3CA — are riding its coattails or acting as co-captains.

While many of the mutations had no effect, 17 accelerated tumor growth and development. What’s more, Ying found that several of them shifted the tumors from a less-aggressive luminal subtype to a HER2-positive subtype.

“That’s something that was previously unknown,” Ying said.

Though PIK3CA mutations were thought to dictate a luminal type of breast tumor, mutations in this gene are found in all four breast cancer subtypes, suggesting that other mutations influence tumor type when paired with altered PIK3CA. Their new approach might provide a platform for researchers to understand how, Ying said.

He chose one mutation in a gene called Tsc22d1 to explore more deeply. Tsc22d1 is deleted in about 2% of patients whose mutations are logged in TCGA. This mutation was one of those that Ying had found to enhance PIK3CA-driven tumor development and shift tumors to a HER2-like molecular subtype. His experiments shed light on the function of Tsc22d1, showing that in its unmutated form it acts to suppress PIK3CA-driven tumor growth.

The approach has potential far beyond screening cancer mutations, the scientists said. When Ying was developing his approach, he used his barcodes to trace mammary tissue development and discover that each mouse mammary gland arises from about 120 progenitor cells.

“This question that Zhe ended up addressing — which is, how many early stem cells give rise to an adult tissue? — that’s not known for any tissue in a mouse system or a human system,” Beronja said. “It’s my favorite part of the study.”

Ying’s approach could be used to answer similar questions for other tissues, such as skin or the cells lining the mouth, or perhaps to investigate questions surrounding the loss of stem cells as we age, Beronja said. A deeper understanding of these processes could be the first step toward correcting problems in tissue development or slowing the aging process.

In support of precision medicine

Ying hopes that the functional information gleaned from his approach could support precision oncology by identifying future treatment targets.

Such information “could directly affect treatment strategy,” he said. “I think this is the most direct way of translating those results from large genomic projects [like TCGA] into treatment, or at least identifying potential targets.”

He and Beronja aim to apply their new strategy to develop mouse models of breast cancer that currently don’t exist. One they want to create is a model in which metastasis, or cancer spread, occurs spontaneously and is driven by patient-derived mutations. Another is a spontaneous model of the most aggressive type of breast cancer, triple-negative, or basal-like, which currently lacks any options for targeted treatment. (In contrast, targeted treatments are on the market to treat people with each of the other three types of breast cancer.)

Most cancer-associated mutations are found in genes of unknown function. Beronja thinks his and Ying’s approach could solve this knowledge gap.

“If our little lab is capable to test 520 [mutations] and identify 17 new drivers of tumorgenicity [tumor growth] and fully validate one of them — if we can do it, there’s really no excuse for the unknown category among the mutations,” he said.

This work was funded by the National Institutes of Health, the National Cancer Institute, a Safeway Early Career Award in Cancer Research, and a Thomsen Family Fellowship.

This article was originally published on February 13, 2020, by Hutch News. It is republished with permission.