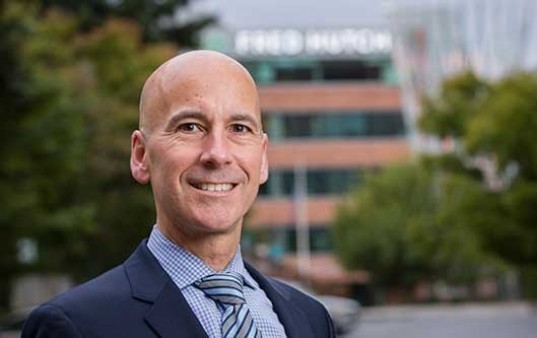 A new category of immunotherapies called checkpoint inhibitors that has been highly effective against many different cancers appears safe to use in patients with both advanced malignancies and HIV, a population excluded from earlier trials of such therapies, according to an early-phase trial.

Principal investigator Dr. Thomas Uldrick of the HIV & AIDS Malignancy Branch at the National Cancer Institute will present late breaking results from the first 17 patients on a Phase 1 study of pembrolizumab in patients with HIV and advanced cancers Friday at the Society for Immunotherapy of Cancer’s annual meeting in National Harbor, Maryland. The ongoing, multi-site study is being conducted by the NCI-funded Cancer Immunotherapy Trials Network, which is headquartered at Fred Hutchinson Cancer Research Center.

[Editor’s note: Abstract O40, Interim Safety Analysis of Cancer Immunotherapy Trials Network – 12 (CITN-12): A Phase 1 Study of Pembrolizumab in Patients with HIV and Relapsed, Refractory or Disseminated Malignancies, will be published on the SITC 2017 website.]
Cancer has become the leading cause of death for people with HIV. But until now, they and their physicians have had little data to guide them on whether they can safely use powerful new anti-cancer drugs called immune checkpoint inhibitors.

“During the development of these drugs, people with HIV were routinely excluded from studies due to concerns that they would not tolerate these medications or perhaps not benefit from them because of their underlying HIV and associated immune dysfunction,” Uldrick said. “The most important first step was to show that this class of drug would be safe in certain cancer patients with HIV.”

Study participants—who were on standard antiretroviral therapy to control their HIV infections and had various cancers that had failed to respond to standard therapies—received pembrolizumab (Keytruda), known since 2015 as “the Jimmy Carter drug” after it swiftly beat back melanoma that had spread to the former president’s brain and liver.

Pembrolizumab belongs to a type of immunotherapy that blocks a braking system cancers use to tamp down the immune response. Checkpoint inhibitors have been extremely effective in some patients with advanced cancers otherwise thought untreatable. The treatments have received U.S. Food and Drug Administration approval for melanoma, lung cancer, head and neck cancer, Hodgkin’s lymphoma, and kidney and bladder cancers.

“These drugs are the backbone of cancer immunotherapy at present and have been shown to be effective in subsets of virtually every different kind of cancer,” said Fred Hutch immunotherapy researcher Dr. Martin “Mac” Cheever, who leads the Cancer Immunotherapy Trials Network and is senior author of the new study. “For patients with HIV who are using effective antiretroviral therapy and have cancers for which these drugs are approved, there’s no reason not to consider these drugs as standard therapy.”

From the earliest days of the AIDS pandemic, a trio of cancers became known as AIDS-defining malignancies.  A rare cancer called Kaposi sarcoma, non-Hodgkin lymphoma and, in women, cervical cancer often signaled that a person’s HIV infection had progressed to full-blown AIDS. People did not die of AIDS, per se. They died of one of these cancers or of infections like pneumocystis pneumonia and toxoplasmosis that took advantage of a weakened immune system.

Since the advent of antiretroviral therapy for HIV in 1996, full-blown AIDS and AIDS deaths have dropped dramatically. But the association between HIV and cancer remains, and not just with the traditional AIDS-defining malignancies. A large study published in the journal Annals of Internal Medicine in 2015 found higher cancer incidence across the board in HIV patients, including lung cancer and Hodgkin lymphoma.

“Globally, more than 35 million people are infected with HIV, and cancer is the number one reason they are dying,” Uldrick said. “Establishing proven effective regimens to manage cancer in people with HIV is critically important.”

The ongoing study will enroll up to 36 patients, and there are plans to include more patients with Kaposi sarcoma, a cancer for which checkpoint inhibitors have not been studied. It is one of the leading causes of cancer deaths in sub-Saharan Africa—where HIV rates are high—and new treatments are sorely needed.

Kaposi sarcoma is caused by the Kaposi sarcoma herpes virus (also known as human herpesvirus 8, or HHV-8) and most commonly appears as lesions on the skin. KSHV can also cause two other B-cell tumors, primary effusion lymphoma and a form of multicentric Castleman disease. Additionally, it can infect blood cells and spread through the bloodstream to infect other cells in the body, Uldrick said.

Also to be presented Friday is the death of one patient later in the study who had Kaposi sarcoma. The death is still being evaluated but was likely due to dissemination of KSHV. Uldrick and Cheever said review of the case suggests the patient had a history of symptomatic KSHV viremia, and the study has been changed to exclude such patients in the future and provide specific guidelines for management should new symptomatic KSHV viremia be observed.

Six other study participants with Kaposi sarcoma or primary effusion lymphoma have been treated on this study. None has experienced similar problems, and some have benefitted from therapy, Uldrick said.

“We do not believe that this takes away from the safety message in patients with HIV and other, better studied cancers,” Uldrick said. “However, more experience is clearly needed in treating KSHV-associated diseases with checkpoint inhibitors.”

A Passion to ‘Change the Culture’

Although the National Cancer Institute has recommended including people with HIV in immunotherapy clinical trials for a decade, virtually every industry-sponsored study over the last five years excluded them, according to a review by Uldrick and others published in the Journal of Clinical Oncology.

Uldrick believes that reluctance to include people with HIV in cancer immunotherapy studies dates back to a time when patients were still dying of opportunistic infections and antiretroviral therapies were more toxic than they are today.

As a physician-scientist who focuses on immunology, virology and cancer, Uldrick became frustrated with the lack of data.

“The culture was slow to change,” he said. “It was preventing the advance of appropriate clinical therapies.”

Dr. Holbrook Kohrt, a Stanford oncologist and researcher, shared that frustration. Kohrt instigated the current clinical trial, according to Cheever, driven by his boyhood experience being one of only two hemophiliacs in a special summer camp who did not die of AIDS. (The genetic disorder impairs the blood’s clotting ability and requires infusions of lifesaving clotting factor, which at that time was made from the pooled blood of tens of thousands of donors. Before a test was developed to detect HIV in blood, about half the hemophiliacs in the United States died of AIDS from infected clotting factor.)

“Holbrook had three patients early on with malignancies that he thought would benefit from [checkpoint inhibitors] and could not get access to the drug because they had HIV,” Cheever said. “He was passionate about this study because he was a passionate individual and physician. But he was also influenced by his experience as someone with hemophilia who lost so many peers to HIV.”

Kohrt died in 2016 at age 38 from complications of hemophilia. He is named as an author of the study.

“He would have predicted these results,” Cheever said.

Getting Out the Message

The ongoing study is now being conducted at eight sites, each of which includes physician-researchers with expertise in both cancer and HIV. A majority of the early patients were enrolled on the trial through Uldrick’s group at the NCI Intramural Research Program in Bethesda, Maryland.

Uldrick will continue to lead the study after he leaves the NCI to become deputy head of Fred Hutch Global Oncology on Dec. 1.

He and Cheever are hoping that these early results lead to additional studies of checkpoint inhibitors in people with HIV and malignancies, especially those cancers that are more prevalent in people with HIV such as Kaposi sarcoma and cancers caused by another virus, human papillomavirus, such as cervical cancer.

In the meantime, the researchers intend to talk about their findings at multiple scientific communities so that people with HIV and their physicians become aware of the data.

“We’d recommend that patients with HIV and malignancy be considered for this therapy if it’s approved for their particular cancer,” Uldrick said.

The trial is funded by NCI and Merck. NCI researchers involved in this presentation report research relationships with Merck & Co., Celgene and Roche through cooperative research and development agreements with NCI. Uldrick is named on an employee invention report for the use of IMiDs® compounds for the treatment of KSHV-associated malignancies.

This article was originally published on November 7, 2017, by Hutch News. It is republished with permission.