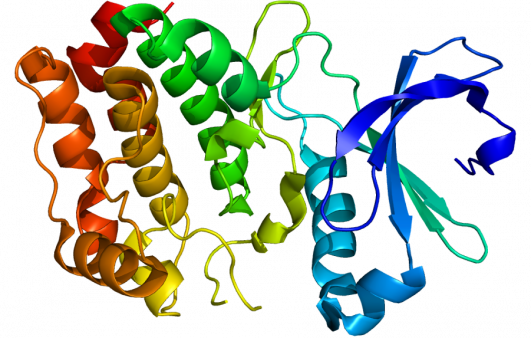 The discovery points the way toward a new strategy for precision cancer therapy.

UC San Francisco scientists have figured out why some lung cancers become drug-resistant after initially responding to targeted therapies. In the process, they devised a new two-pronged approach that yields an effective treatment for these cancers in the laboratory and holds tremendous promise for the future of precision medicine, they said. The findings are detailed in a study published Nov. 26 in the journal Nature Medicine.

Certain lung cancers are characterized by mutations in a protein called EGFR. Normally, EGFR acts as the ‘on/off’ switch in a complex molecular circuit that tells the cell when it’s appropriate to grow and divide (on), and when it’s not (off). Though the circuit generally knows when to shut itself off, the mutant forms of EGFR found in lung cancer are stuck in the ‘on’ position. This leads to abnormal cell proliferation and transforms healthy tissue into cancer.

Though scientists have developed designer drugs that target mutant EGFR and activate the tumor’s self-destruct machinery, these curative effects rarely endure. Even after three successive generations of increasingly potent precision therapies that specifically target the mutant protein, the results are always the same: up to 18 months of remission followed by relapse. And when the tumor returns, it’s drug resistant and more aggressive than ever.

“The promise of precision medicine is that it allows doctors to treat patients using drugs that target a patient’s unique form of cancer. But for all the hype, precision medicine often fails to live up to its potential. It’s an unfortunate clinical reality that needs to be solved,” said Sourav Bandyopadhyay, PhD, UCSF associate professor of Bioengineering and Therapeutic Sciences and senior author of the new study.

Bandyopadhyay says that the reason there’s a gap separating precision therapy’s promise and its actual efficacy is because tumors are clever. They’re able to rewire their internal circuitry and devise new strategies to promote their own survival, even after initially succumbing to the shock of targeted therapy. Though researchers have shown that these drugs continue to inhibit EGFR activity after tumors become resistant, the self-rewiring means that the tumor is no longer reliant on the mutant protein for its continued survival. Bandyopadhyay wanted to know why.

To identify drivers of drug resistance, the researchers took multiple cancer cell lines with mutated EGFR and treated them in the culture dish with either osimertinib or rociletinib, third-generation drugs that target the mutant protein. Osimertinib is FDA approved for the treatment of EGFR-mutated non-small cell lung cancer. Though the cancer cells appeared to die off after the drugs were administered, they reemerged just six weeks later resistant to both.

After the cancer cells stopped responding to EGFR drugs, the researchers tested 94 additional drugs to see if any could reverse the acquired resistance. They discovered that drugs targeting a protein called Aurora Kinase A, when combined with osimertinib or rociletinib, killed the cancer cells once and for all.

Similar results were observed when the researchers transplanted drug-resistant tumors from lung cancer patients into live mice. Though the tumors continued to grow when the mice were treated with EGFR drugs alone, the two-pronged approach in which both proteins were targeted simultaneously caused the tumors to shrink with no observed toxicity to the mice.

The researchers found that Aurora doesn’t drive tumor growth on its own. That’s why a treatment regimen targeting only Aurora failed to thwart the cancer’s progress. What Aurora provides is a way for malignancies to escape death.

Osimertinib and rociletinib work by shutting off mutant EGFR. This not only slows the cancer’s growth, it also triggers its self-destruct circuitry, causing tumors to wither away and die. That is, until the tumor rewires itself and activates Aurora.

Aurora serves as cancer’s escape hatch. Acting independently of EGFR, Aurora silences the cell’s suicide circuits, regardless of what EGFR is telling these circuits to do, thus ensuring the cancer’s continued survival. By targeting Aurora and mutant EGFR in tandem, the researchers effectively sealed the cancers fate by sealing shut its lone escape hatch.

Not only did the researchers discover a new way to target drug-resistant tumors, they also identified a biomarker that could tell clinicians whether the lung cancer they’re treating would be susceptible to combined therapies that target both EGFR and Aurora.

The researchers found elevated levels of a protein called TPX2 in biopsies of advanced stage, drug-resistant lung cancers taken from multiple patients. They believe that TPX2, which is known to activate Aurora kinase, may help clinicians identify when a patient’s tumor will succumb to combined targeted therapies.

The next step, says Bandyopadhyay, is to work towards getting their two-pronged approach and the TPX2 biomarker approved for clinical trials.

“As more and more patients are progressing on third-generation EGFR inhibitors, our work delineates a new mechanism of resistance that appears to occur in the majority of patients and is targetable using existing Aurora kinase inhibitors. We hope this work re-invigorates pharma interest in cell cycle inhibitors such as Aurora kinase inhibitors. We believe that this class of molecules has incredible power when combined with other targeted therapies, which is not how they have been tested historically. We hope that our results catalyze the initiation of new trials so that patients with mutant EGFR may reap the benefits of our combined approach.”

This article was originally published on November 26, 2018, by the University of California, San Francisco, News Center. It is republished with permission.

Retevmo Is Active Against Multiple Types of Advanced Cancer