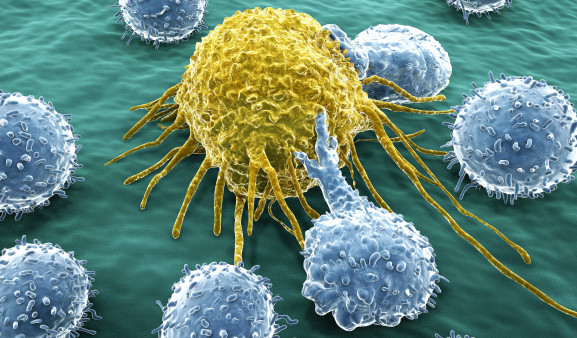 Genetically modified natural killer cells led to remission in eight out of eleven patients with lymphoma or leukemia.

Genetically engineered natural killer (NK) cells, a new approach to immunotherapy, demonstrated a high response rate in a small study of people with two types of blood cancer, researchers recently reported. Treatment was well tolerated, showing that this approach has the potential to offer the benefits of CAR-T therapy with fewer side effects.

Chimeric antigen receptors are artificial receptors designed to better recognize cancer. CAR-T therapy involves removing a sample of a patient’s white blood cells, reprogramming the T cells to attack their cancer, manufacturing a large number of the modified cells in a laboratory and infusing them back into the body. Two CAR-T therapies, Kymriah (tisagenlecleucel) and Yescarta (axicabtagene ciloleucel), are currently approved. Both target the CD19 protein on B cells that grow out of control in people with leukemia and lymphoma.

T cells are the main soldiers in the immune system’s fight against cancer, but NK cells also play a role. Engineered CAR-NK cells are less likely to cause the type of immune-mediated side effects often seen with CAR-T therapy. In addition, while T cells must be genetically matched to target cells, NK cells do not require genetic matching. This means CAR-NK cells could be manufactured as off-the-shelf products using NK cells from unrelated donors and do not have to be custom-made for each patient using his or her own cells, a process that is costly and usually takes a few weeks.

As described in The New England Journal of Medicine, Enli Liu, MD, of the University of Texas M.D. Anderson Cancer Center in Houston, and colleagues conducted a Phase I/II trial of CAR-NK cells in six people with relapsed or refractory (nonresponse) non-Hodgkin lymphoma and five people with chronic lymphocytic leukemia (CLL). All participants had received at least three prior lines of treatment, and some had tried many more.

CAR-NK cells were created by using a disabled retrovirus vector to deliver artificial receptors that target CD19 to NK cells derived from donated umbilical cord blood. The virus also delivered interleukin 15 (a cytokine that promotes NK cell proliferation) and an enzyme used as a safety switch to deactivate the engineered cells if necessary. The modified cells were then multiplied in a lab and administered as a single infusion at one of three doses. Before receiving the CAR-NK cells, the patients were given strongly conditioning chemotherapy to kill off their existing immune cells to make room for the new ones.

Eight of the 11 treated study participants experienced remission of their cancer after a median follow-up of 13.8 months, for a response rate of 73%. Four people with lymphoma and three with CLL had complete remission with no evidence of disease. Responses were seen within a month after the infusion at all dose levels, the researchers reported. What’s more, the infused CAR-NK cells proliferated in the body and persisted at low levels for at least a year.

Treatment was generally safe and well tolerated, and most adverse events were related to the conditioning chemotherapy. CAR-NK administration was not associated cytokine release syndrome or neurotoxicity—two risky side effects of CAR-T therapy—or graft-versus-host disease (when non-genetically matched donor immune cells attack the recipient). Further, no increases in inflammatory cytokines were observed. None of the participants were admitted to an intensive care unit for management of side effects, as is sometimes required with CAR-T therapy.

Based on these promising results, the researchers have expanded the study to include 60 patients. They are also working to develop CAR-NK cells to target other types of cancer, including harder-to-treat solid tumors.

"We are encouraged by the results of the clinical trial, which will launch further clinical studies to investigate allogeneic cord blood-derived CAR NK cells as a potential treatment option for patients in need,” senior study author  Katy Rezvani, MD, PhD, said in an MD Anderson press release.