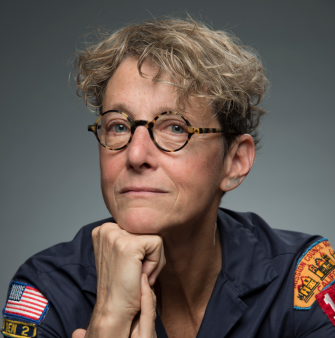 Changing How LGBT People With Cancer Are Treated

An interview with the founder of the National LGBT Cancer Network

The intersection of LGBT identity and cancer is the focus of the National LGBT Cancer Network, a nonprofit that since 2007 has been advocating for the rights of LGBT people with and at risk for cancer. The organization’s goals include teaching the LGBT community about its increased cancer risks and the importance of screening and early detection, training health care providers to offer more informed and welcoming care and advocating for LGBT patients, survivors and caregivers in mainstream cancer organizations, research initiatives and the media. The network provides a range of services and resources to its clients, including medical articles, personalized risk reports, lists of LGBT-welcoming cancer screening and treatment providers and cultural competency trainings.

What was the driving force behind the founding of the organization?

In my 40s and 50s, I had four friends—lesbians—die of ovarian cancer. And I began to wonder, Why is this? Why is this happening to my people? And I was asked by the LGBT community center here in Manhattan to develop a support group for a Susan G. Komen [a breast cancer organization] grant for lesbian breast cancer.

What are some of the unique needs and challenges LGBT people face when it comes to cancer?

Most people say cancer doesn’t discriminate, but the health care system and the society we live in does discriminate, and that increases the cancer risks for LGBT people. So we have increased cancer risks, we have decreased screening rates and we have additional challenges once we’re diagnosed with cancer. 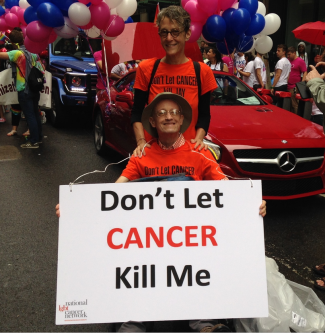 What are some of the reasons that rates of cancer are higher in the LGBT community?

We do have greater cancer risks, not because our bodies are different, of course, but because of behaviors that we engage in, most of which stem from discrimination and stigma. For example, studies have shown that when kids are bullied in school, they are far more likely to smoke, and LGBT people smoke cigarettes and use tobacco in general at much higher rates than the general population. The smoking follows the stress and stigma of living as sexual and gender minorities. Tobacco does not just cause lung cancer; it increases your risk for many types of cancer, including anal cancer.

Also, we’re more likely to abuse alcohol and drugs. In many parts of the country, gay bars are the only place to find people like you, and bars encourage drinking, of course. And like tobacco, alcohol increases cancer risks. They say that lesbians have the densest cluster of risk factors for breast cancer because each of the things that I’m going to mention increases your risk for breast cancer, and, as a group, lesbians do all of them: drink more, smoke more, are more likely to be overweight or to have a high body density or to eat a high-fat diet. A lesbian woman is also less likely to have had a biological child by age 30, which is protective.

Finally, LGBT people are twice as likely as the general population to be uninsured.

Is it important that LGBT people come out to their doctors?

So they can know what specific cancers they’re most at risk for?

We need to say who we are, and our health care providers need to ask who we are and not be afraid to find out what the answer is. All across cancer treatment, you don’t just have to deal with the oncologist. You have to deal with the surgeon, the person who does the MRIs, the [person] who takes your blood, the front-desk staff, etc. When I ask people, “How many providers do you have?” they often say, “Two dozen.”

So you don’t come out once, you have to come out multiple times. And, as people responded in an online survey we did, with each procedure there is the anxiety of the procedure and, on top of that, wondering if it was safe to come out or not.

Where do LGBT people with cancer turn for support?

Most of the support that LGBT people with cancer get is online, such as on Facebook groups.

What steps does the network take to accomplish its goals?

We provide cultural competency training, which happens in person. We travel around the country educating oncologists and universities and hospital systems and social service organizations on the needs of LGBT patients and clients, because people tend to say, “Well, I treat all my patients the same,” and they think that’s a good thing, but often what that really means is “I treat everybody like they’re white and cisgender and heterosexual,” And that’s not really that useful.

We also have printed informational cards, and we go and speak in places. Most of our work, though, is online. Social media’s great. It’s practically free—unless we boost [pay to promote] something—and we can reach a lot of people.

Can you say more about the cultural competency training program?

We started the cultural competency training program with a five-year grant from the New York State Department of Health. Our goal is to change people’s knowledge, attitudes and behaviors. Changing knowledge is the easiest—I can tell you that “gender identity and sexual orientation are on a continuum,” and you can memorize that. Attitude and behavior are progressively harder to train—especially when you only have two hours—but have much more impact on patients.

To train attitude, we have made videos. There’s one that you can watch on YouTube called “Vanessa Goes to the Doctor,” which is a spoof on 1950s instructional videos. And some of the other videos that we have are like miniature movies. They’re not instructional, like “This is what you should do”—they’re about real people. And when real people tell their real story, that’s what changes attitudes. A lesbian in one of the films talks about how she and her partner and their kids went to Disney World, and one of the kids got sick, and they went to the hospital, and the providers said, “Who’s her mother?” and they said, “She has two mothers,” and the providers said, “Not here, she doesn’t. She only has one mother.” She says, “We were traumatized. My kid was traumatized.” And I think anyone who’s a parent can empathize with that.

And the other way that we train people is to help them see themselves better. I think everybody has an experience of being other, and we have a lot of activities that we do to help people get in touch with that, to help them understand how LGBT patients feel dealing with health care providers. And so, rather than coming to them like, “You’re the enemy, and you got it wrong, and these are my people, and you’ve got to do it this way,” it’s more encouraging and inspiring as opposed to teaching and shaming. It’s OK to make a mistake. It means you’re willing to try to get it right. 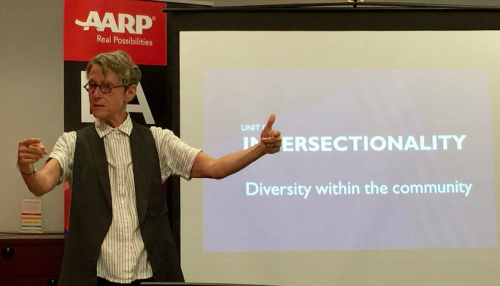 Yes. It also includes being aware of things as small as whether the intake forms allow for something other than “male” or “female” in the “gender” category and what’s in the magazines in your waiting room. You sit down, and if you don’t see something like a rainbow sticker that says, “Gay spoken here” or a nondiscrimination policy that includes sexual orientation and gender identity, you’re like, “Am I the first LGBT person you’ve ever met?”

We also know that one out of five transgender people have been refused care simply because they’re transgender. So, because there’s been so much mistreatment and so much discrimination in the health care system, LGBT people enter their cancer treatment wary. They don’t assume that they’re safe; they assume they’re unsafe until they’re shown that they’re safe. And meanwhile, providers are waiting for the patients to come out because they think it’s too intrusive to ask them, “What pronouns do you use?” or “Who’s on your support system?”

Which programs, resources or advocacy initiatives at the network are you most excited about?

Because cancer screening is so difficult for LGBT people, one of the things that we do is to maintain a directory on the website of LGBT-welcoming, free or low-cost cancer-screening facilities around the country. Just imagine that a trans man who’s not had top surgery wants to get a mammogram. They’re going to go into this place where they’re going to be the only man sitting in the waiting room, aside from someone’s husband, and they’re going to feel alienated. So there are some places that we’ve called out as especially good for trans people, which have said to us, “We will give trans people the first appointment of the day. They can wait in a different waiting room, and they will not be given a pink robe.” Because the whole “pink-ing” of breast cancer is really anathema to many queer women.

Similarly, there’s a lot of pressure to do reconstruction following a mastectomy. And more and more queer women and trans men are saying, “No, I don’t want that. It’s more surgeries, multiple surgeries, more risk for infections or complications. And I am happy. I am not defined by having breasts”—they’re going “flat,” as they say. So we want to encourage doctors to consider no reconstruction as a healthy and even sexy alternative.

What programs on your site are especially popular?

We have an online program where you can create a personalized cancer risk report by answering questions like “Do you smoke cigarettes?” and “Do you have a parent who is such-and-such?” and “What is your race?” (because Black people are more vulnerable to colon cancer) and “What reproductive organs do you have?” (we don’t say “What sex are you?”), etc. Then the program will put out the report, and then you can find a provider to get screened. And we also have a system where you can get a text a year from now, a reminder text, for your next screening.

What advice do you have for someone who identifies as LGBT and has a cancer concern?

Gather your friends to be a good support group. Go as a pack. I encourage people to get cancer screenings that way. Like, why don’t you all go take your friends and get mammograms together? The first of you is going to come out to the doctor, and it’s going to be awkward, but by the third time, it won’t be. And you have each other for support if it didn’t go well.

Click here to learn about a similar organization, the National LGBT Cancer Project.