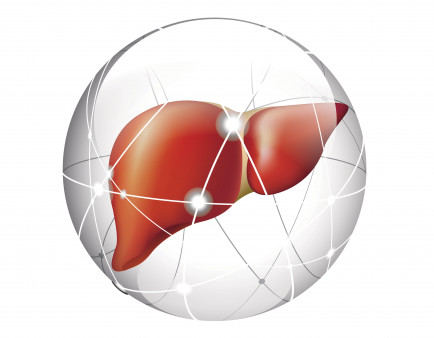 The PD-1 checkpoint inhibitor Keytruda (pembrolizumab) offered improved response rates for people with advanced liver cancer, although survival improvements did not meet statistical thresholds, according to research presented at the American Society of Clinical Oncology (ASCO) annual meeting this week in Chicago. Another study showed that pairing Opdivo (nivolumab) with a different type of immunotherapy improved outcomes considerably.

Hepatocellular carcinoma (HCC), the most common type of cancer that originates in the liver, is often detected late and is difficult to treat. Liver cancer generally does not respond well to traditional chemotherapy. Keytruda and Opdivo, as well as a handful of targeted therapies that interfere with cell growth and blood vessel development, have recently been approved to treat this cancer.

Keytruda and Opdivo are PD-1 checkpoint inhibitors that help the immune system fight cancer. PD-1, a checkpoint protein on T cells, helps regulate immune function. Some tumors can hijack PD-1 to turn off immune responses against them. Drugs that block the interaction between PD-1 and its binding partner, known as PD-L1, can release the brakes and restore T-cell activity. Yervoy is a different type of checkpoint inhibitor that blocks CTLA-4, which turns off immune responses by suppressing T-cell replication.

Keytruda received accelerated approval in November 2018 based on the results of the smaller Phase II KEYNOTE-224 trial. That nonrandomized study included 104 people with advanced liver cancer who did not respond to or could not tolerate the targeted therapy Nexavar (sorafenib). Everyone received 200 milligrams of Keytruda by IV infusion every three weeks for about two years or until they experienced disease progression or unacceptable side effects.

As previously reported, the overall response rate—meaning complete or partial tumor shrinkage—was 17%, including one complete response. Another 44% had stable disease, while 33% experienced disease progression. The median progression-free survival (PFS), meaning patients were still alive without worsening of disease, was 4.9 months—an improvement over standard therapy. The one-year PFS rate was 28%, and the estimated overall survival rate was 54%.

KEYNOTE-240 also enrolled participants with advanced HCC who progressed on or could not tolerate Nexavar. More than 80% of the 413 participants were men, and the median age was approximately 67. Nearly 40% were enrolled in Asia, about a third in Europe and 8% in the United States. Almost all were classified as Child-Pugh A, meaning they still had well-preserved liver function. In this trial, participants were randomly assigned to receive the same dose of Keytruda or a placebo along with the best supportive care.

Overall response rates were 18.3% in the Keytruda group and 4.4% in the placebo group, a statistically significant difference that probably was not driven by chance. Six people (2.2%) in the Keytruda group, but none in the placebo group, experienced complete remission. Stable disease rates were 43.9% and 48.9%, respectively—an unexpectedly high rate in the latter arm. Finally, 32.4% of those taking Keytruda and 42.4% of those taking the placebo experienced disease progression.

However, as Merck announced in February, the study did not meet its primary endpoints of overall and progression-free survival. The median overall survival was 13.9 months in the Keytruda group versus 10.6 months in the placebo group—a 22% reduction in the risk of death. Although the difference met the traditional threshold for statistical significance (a p-value less than 0.05), it did not meet the more stringent threshold set for this analysis (a p-value less than 0.0174). The median progression-free survival was similar in the two groups, 3.0 months and 2.8 months, respectively.

Treatment with Keytruda was generally safe and well tolerated, with no unexpected side effects not seen in previous studies. About 19% of Keytruda recipients and 8% of placebo recipients experienced severe treatment-related adverse events; about 7% and less than 1%, respectively, stopped treatment for this reason. A concern with checkpoint inhibitors is that in addition to restoring immune responses against cancer, they can unleash the immune system more broadly, leading to inflammation of healthy organs. About 7% of Keytruda recipients experienced severe immune-mediated adverse events.

After stopping the study treatment, about 42% of Keytruda recipients and 47% of placebo recipients went on to try other approved or experimental cancer therapies, which may have contributed to the better-than-expected outcomes in the placebo group.

Despite the failure to meet the preset statistical criteria, the researchers concluded that the magnitude of benefit with Keytruda is consistent with the findings from KEYNOTE-224 and that “taken together, these data support that the risk-benefit balance for pembrolizumab is favorable in the second-line setting for HCC.”

The Food and Drug Administration (FDA) generally requires therapies that receive accelerated approval to show clinical benefit—and ideally improved survival—in follow-up studies. The agency seldom rescinds approvals, however, and it may let the approval of Keytruda for HCC stand based on its modest benefits in this trial.

This study previously showed that Opdivo alone (known as monotherapy) led to an overall response rate of 14% and a median overall survival of about 16 months for people previously treated with Nexavar. In September 2017, the FDA granted accelerated approval of Opdivo monotherapy for HCC based on these findings.

Aiming to improved response and survival rates, the trial also evaluated Opdivo in combination with Yervoy in an exploratory cohort of 184 previously treated patients. Most had cancer invading liver blood vessels or spread beyond the liver.

Participants were randomly allocated to receive one of three different dosing regimens, continuing treatment until they experienced disease progression or intolerable side effects:

In a combined analysis of all treatment arms, the overall response rate was 31%, including 5% with complete responses—about twice the rate seen with Opdivo alone. The median duration of response was 17.5 months. Patients in Arm A had the longest median overall survival, at 22.8 months, and a 30-month overall survival rate of 44%.

The combination was generally safe, but severe side effects were common—more so than with Opdivo monotherapy. Rates of severe (grade 3 or 4) treatment-related adverse events were 53% in Arm A, 29% in Arm B and 31% in Arm C. The most frequently reported severe side effects included rash, itching, diarrhea and laboratory abnormalities.

Based on these findings, the researchers concluded that Opdivo plus Yervoy “led to clinically meaningful responses and had an acceptable safety profile” in previously treated people with HCC.

“These results indicate the addition of Yervoy to Opdivo elicits promising clinical responses in patients with advanced HCC, reiterating the important potential impact of this combination research,” Yau said in a Bristol-Myers Squibb press release.

Click here to read the Opdivo plus Yervoy study abstract