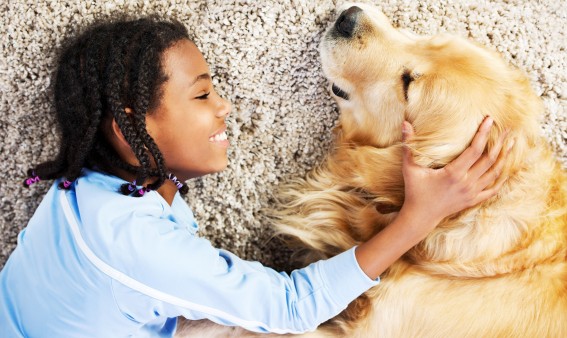 Stella the dog has been a loyal companion for Sayde Patel, and gives her confidence about the future. Istock (Model(s) used for illustrative purposes only)

“Metastatic breast cancer is still an incurable disease, but it is highly treatable—and patients can live well for many, many years.”

Each time the metastatic breast cancer spreads too deeply into Sayde Patel’s lungs, she changes clinical trials. And after six switches in 10 years, she maintains a glass-half-full attitude about the process.

The way Patel sees it, she’s lucky to be living at a time when so many clinical trials are available to help women and men with metastatic (stage IV) cancers—individuals who, until recently, had little chance of long-term survival. Besides, Patel adds, if not for one seemingly ordinary chemotherapy infusion at the Susan F. Smith Center for Women’s Cancers at Dana-Farber a few years back, she would never have met the baby of her family.

“I became friendly with a volunteer who gave me wonderful hand massages, and one day I told her how much I’ve always wanted a shih tzu puppy,” explains Patel, 54. It was fate: Hilda Santos, the volunteer, immediately connected Patel with her neighbor, who had three shih tzus and helped Patel find a puppy.

“I fell in love immediately,” Patel says of the dog named Estella.

Since that day, Stella has been a loyal companion for Patel, her husband Vimal, and their two grown sons. The dog, who Vimal calls “Sayde’s shadow,” also gives her master confidence about the future. After the hurdles Patel has overcome to reach this point, she believes the circumstances that brought them together—like her journey to Dana-Farber—were meant to be.

Born in Lebanon, Patel came to the United States in her mid-20s. She met Vimal through a mutual friend, and the couple married and adjusted to life in their new homeland. In addition to raising their boys, Sayde worked as an office manager, and Vimal at Airgas, a natural gas supplier. And when Sayde was diagnosed with breast cancer, in 2002, she received chemotherapy at a local hospital and breast surgery at Brigham and Women’s Hospital in Boston.

Five years later, Sayde developed a persistent cough that wouldn’t go away. Vimal pushed her to see a doctor, and tests revealed the cancer had returned—this time as stage IV metastatic disease in her lungs, back, liver, and spleen. Told that Sayde had six months to live, the couple transferred their care to Dana-Farber and oncologist Erica Mayer, MD, MPH.

“Instead of crying, I wanted to fight,” Sayde says of this dire news. “Ten years later, I’m still here, and I’m still fighting.”

That, Mayer says, is because new drugs are constantly being developed in laboratories and then tested in clinical trials tailored to breast cancer subtype: hormone-receptor positive, triple-negative, or HER-2 positive. Dana-Farber treats more metastatic breast cancer patients, and offers more clinical trials for stage IV breast cancer, than any facility in New England.

“Metastatic breast cancer is still an incurable disease, but it is highly treatable—and patients can live well for many, many years,” says Mayer. “The new strategies we evaluate in clinical trials may become standard therapies in just a few short years. Brave individuals like Sayde are helping themselves as well as helping others.”

Sayde’s family is proud of her determination. Vimal attests that his wife has “more strength than any 10 people” and inspires everyone she meets.

“Dr. Mayer always says there’s another new medicine waiting when I need it,” Sayde says. “The one I’m on now shrank my lung tumor 45 percent after the first treatment, and now we’re at a stable stage. It’s not growing anymore, and anything status quo is good for us.”

And good for Stella. The better Sayde feels, the more likely her four-legged companion will get a daily walk from her favorite master.

This article was originally published on February 23, 2018, by Dana-Farber Cancer Institute. It is republished with permission.