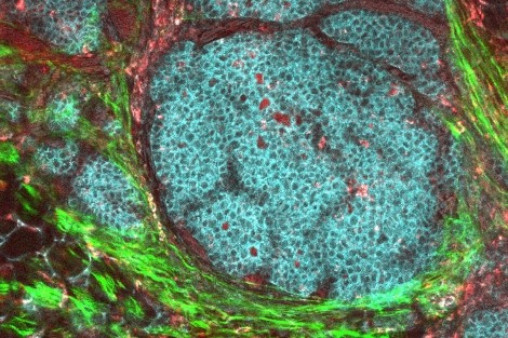 A breast cancer tumor and its microenvironment is shown in a live mouse model. A UCSF team used big data to show how tumors interact with their surroundings Courtesy of the National Institutes of Health

More than 60 percent of breast cancer cases involve defects in the same biochemical chain of events within cancer cells — known as the PI3 kinase (PI3K) pathway — but efforts to develop therapies targeting this pathway have met with little success after hundreds of mostly failed clinical trials. And researchers still don’t understand why.

In a paper published June 25, 2018, in Nature Chemical Biology, the researchers identified a protein that cancer cells use as a shield to protect the PI3K pathway against targeted drugs, and showed that blocking this protein using a second drug (itself already in phase 2 clinical trials) allowed multiple previously ineffective therapies to slow cancer cell growth and shrink tumors. The researchers now plan to pursue clinical trials to determine if these combination therapies can extend the lives of patients with advanced, recurrent breast cancer.

“The failure of PI3 kinase drugs has been a huge mystery,” said senior author Sourav Bandyopadhyay, PhD, assistant professor of bioengineering and therapeutic sciences and a member of the UCSF Helen Diller Family Comprehensive Cancer Center. “Every pharma company in the cancer space has tried to target the PI3 kinase pathway, with little success. Now we may know why.”

“This work has immediate clinical implications, and we hope this study spurs interest in combining these two classes of embattled cancer drugs. These data clearly warrant clinical testing and we are working to put together a phase 1 clinical trial to test such drug combinations in patients,” Bandyopadhyay added.

Kinase Protects Cancer from Many Targeted Drugs
The new study focused on kinases, a diverse family of more than 500 different enzymes that drive important biological events, such as cell division. Malfunctioning kinases spur destructive tumor growth in many forms of cancer, and have therefore become a major focus of drug development. The PI3K pathway in particular (comprising PI3 kinase, AKT, and mTOR proteins as well as associated genes such as PTEN) has been implicated in a majority of breast cancer cases, and has long been regarded as a promising pharmaceutical target for a variety of cancers.

Researchers have tested hundreds of compounds that target the PI3K pathway and theoretically ought to cause cancers to self-destruct, but virtually all of these drugs have failed to even slow the cancers down. One drug in this class — Novartis’s Afinitor (everolimus) — has been approved for treatment of advanced, recurrent breast cancer by the U.S. Food and Drug Administration, but even this drug typically only prolongs survival in breast cancer patients by mere months.

Bandyopadhyay has long been interested in understanding whether kinases that are not directly involved in driving cancerous growth might nevertheless be behind cancers’ ability to develop resistance to targeted drugs. So rather than focusing their study only on kinases already suspected to play a role in breast cancer, senior author Bandyopadhyay and colleagues instead conducted an unbiased survey of the hundreds of different kinases within cells. “Instead of looking at one drug, one tumor or one kinase, we took a systematic view,” he said.

In experiments with human breast cancer cells grown both in lab dishes and in mice, the UCSF team employed a new method — using chemically active, microscopic beads to purify active kinases and mass spectrometry to identify and quantify them, focusing on 151 known to be expressed in cancer cells. They gathered data on how different drugs that target the PI3K pathway affected the activity of these kinases in a variety of breast cancer cell lines maintained in laboratory culture, looking for kinases whose activity was associated with resistance to treatment.

They homed in on a previously unsuspected protein, called Aurora kinase A, as a central driver of drug resistance in breast cancers. “The presence of Aurora kinase A causes resistance to every drug targeting the PI3K-pathway that we tested,” Bandyopadhyay said. “We found other hits, but it was the top-ranked by far.”

Combination Therapy Restores Drug Efficacy
To learn whether blocking the activity of Aurora kinase A could restore the efficacy of drugs targeting the PI3K pathway, the researchers tested an experimental drug called MLN8237 (alisertib), which specifically targets and blocks the activity of Aurora kinase A, a kinase unrelated to the PI3K pathway. This drug has been in phase 2 trials for a variety of cancer types, but is often considered too toxic at the doses needed to be effective on its own.

Bandyopadhyay’s team found that combining low, nontoxic dosages of MLN8237 with everolimus not only stopped the growth of estrogen receptor–positive tumors, but also killed cancer cells. In previous preclinical studies, Bandyopadhyay says, single-drug treatments targeting the PI3K pathway have stopped growth, but have not eliminated cancer cells outright, whereas the new combination treatment activated a cellular suicide pathway in tumors that killed off malignant cells.

The researchers evaluated the combination treatment in 12 types of human breast cancer cells grown in laboratory cultures, as well as in mice, where the researchers grew tumors derived from one of these human breast cancer cell lines. Combining everolimus with MLN8237 caused tumor cells to self-destruct across the majority of cell lines tested, the researchers found. In mice treated with everolimus alone, tumor growth slowed, but tumors did not shrink, in agreement with previous studies. In contrast, the combination of everolimus and MLN8237 shrank tumors in all nine mice treated. Combining the two drugs did not appear to be toxic at the dosages used in the study.

According to Bandyopadhyay, the new study highlights the value of unbiased bioinformatics analysis to map how cancers respond to clinically relevant drugs.

“There have been more than 200 clinical trials with experimental drugs that target the PI3K pathway, and probably more than $1 billion invested, with only one approved drug treatment so far,” Bandyopadhyay said. “We believe the reason these drugs have not been more successful in the clinic is because of proteins that, when they are present in tumor cells, cause innate resistance to these drugs. We now have methods and technology we can use to identify these proteins.”

The study was funded by the U.S. National Institutes of Health, the U.S. Department of Defense, the Prospect Creek Foundation, the American Cancer Society, the Gazarian Foundation, and by OHSU Pilot Project Funding.

This article was originally published on June 25, 2018, by the University of California, San Francisco, News Center. It is republished with permission.