Studies show lesbians are less likely to get Pap smears than heterosexual women. But HPV can happen to anyone.

When it comes to preventing cervical cancer, frequent HPV screenings are a vital tool, regardless of one’s gender or sexuality. But a recent survey conducted by NHS England, the country’s national health service, found that lesbian and bisexual women believe the “dangerous myth” that women who have sex with women cannot contract human papillomavirus (HPV), which causes most cases of cervical cancer. As a result, they may be less likely to get regular checks for the virus compared with heterosexual women, putting them at risk for cervical cancer, according to The Independent.

The truth is, HPV can be passed between women through sexual touching, even if neither partner has ever had sex with a man. About 80% of sexually active people get HPV at some point in their lives.

The myth appears to be prevalent in the United States as well. Indeed, research has found many lesbian women in this country do not get regularly screened for HPV. In a 2017 study conducted by researchers at Rice University, published in Population Research and Policy Review, researchers reviewed interviews with 2,273 lesbian, 1,689 bisexual and 174,839 heterosexual women across 15 states about the last time they had a mammogram or Pap test. The interviews had been conducted as part of a survey by the Centers for Disease Control and Prevention’s Behavioral Risk Factor Surveillance System between 2000 and 2010.

Although the results showed no differences in the rates of regular or “timely” mammograms in women across the sexuality spectrum, they found that lesbian women were up to 25% less likely to get screened for cervical cancer than their heterosexual and bisexual counterparts. Study authors say the approval process for accessing birth control in the United States may explain why. “Many doctors require women who seek a birth control prescription to have had a recent Pap test,” explained Alexa Solazzo, the study’s lead author, in a press release. “Women who don’t have sex with men might theoretically have less a need for birth control than women who do have sex with men. Thus, they may be less likely to seek care at an ob-gyn and receive a pap test.”

Experts in both countries stress that frequent screening for HPV is an important tool for reducing cancer mortality because it increases the chances of finding cancer at an early stage, which significantly increases a woman’s chance of survival.

To read the article in the Independent, click here.

To read the latest recommendations for HPV vaccination, click  here.

To read more about LGBT and cancer health, check out “Changing How LGBT People With Cancer Are Treated” 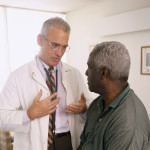