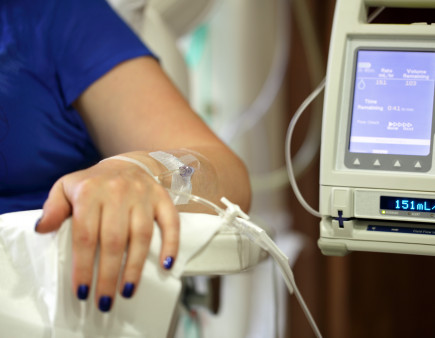 Waiting more than 30 days after surgery was associated with worse outcomes.

Women with triple-negative breast cancer who delayed adjuvant chemotherapy for more than a month after surgery had a higher risk of disease recurrence and death, according to a presentation this week at the San Antonio Breast Cancer Symposium.

“Our data show that it must be a priority for patients with triple-negative breast cancer to begin adjuvant chemotherapy within 30 days of completing surgery. After this period of time, the benefit of the chemotherapy is significantly diminished,” said presenter Zaida Morante, MD, of Instituto Nacional de Enfermedades Neoplásicas in Lima, Peru.

Breast cancer is classified by the type of receptors it expresses. A majority of breast cancers carry estrogen receptors and treatment usually includes hormone-blocking drugs. Other tumors express HER2 (human epidermal growth factor receptor 2) and can be treated with HER2 inhibitors. Triple-negative breast cancer (TNBC) doesn’t express any of these receptors and is harder to treat. Accounting for up to 15 percent of all breast cancers, TNBC tends to be more aggressive and is more likely to affect younger women.

Treatment for breast cancer that has not yet spread elsewhere in the body usually begins with surgery to remove as much of the cancer as possible. This is typically followed by radiation or chemotherapy, or both, to kill off any remaining cancer cells and reduce the risk of recurrence. This is known as adjuvant therapy.

Morante’s team conducted a retrospective analysis of outcomes among 687 women with Stage I to Stage III TNBC who received adjuvant chemotherapy at Instituto Nacional de Enfermedades Neoplásicas between 2000 and 2014, looking at the influence of time to chemotherapy initiation.

The average age at diagnosis was 49. About 60 percent were diagnosed with Stage II disease, meaning cancer may have spread to underarm lymph nodes but not further, while 30 percent had Stage III, meaning it may have spread to nearby structures but not distant parts of the body. Almost all received chemotherapy using anthracycline drugs, such as doxorubicin, with or without taxane drugs, such as paclitaxel.

Time to treatment was defined as the number of days between surgery and the first dose of chemotherapy. Participants were divided into four categories: less than 30 days (28 percent), 31 to 60 days (48 percent), 61 to 90 days (17 percent) and 91 days or longer (8 percent). The median follow-up period was about 8.5 years.

Morante noted that some prior studies have focused on people with Stage I cancer, which is still mostly confined to the breast. These women may be able to wait longer to receive chemotherapy without showing an increased risk of disease progression or death.

These findings raise the question of whether starting chemotherapy even earlier before surgery, known as neoadjuvant therapy, might improve outcomes even more for women with intermediate-stage breast cancer.

“The greater the delay, the worse the outcomes,” the researchers concluded. “As this represents a feasible opportunity for improvement, every attempt should be made to avoid delayed adjuvant chemotherapy initiation in this high-risk group of patients.”