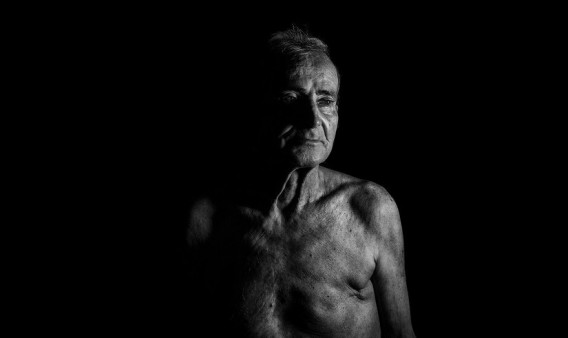 From a series of portraits of men with breast cancer by Lisbon-based photographer Jose Ferreira. Jose Ferreira (used with permission)

Treatments for Breast Cancer in Women Should Also Work for Men

Hormone therapy is safe in men with breast cancer, but side effects remain a challenge.

Medications used to treat women with breast cancer are also safe and potentially effective for men with the disease, according to a set of posters presented at the European Society for Medical Oncology (ESMO) 2018 Congress, taking place this week in Munich.

A real-life study found that men with metastatic breast cancer generally received the same types of treatment as women and had similar progression-free survival. Two randomized trials showed that the hormone therapy tamoxifen and the targeted therapy Kisqali (ribociclib) appear safe and well tolerated in men. But adding gonadotropin-releasing hormone analogs can cause side effects that negatively affect quality of life.

Like women, men have breast tissue that can develop cancer, although this happens much less often in men. About 2,550 new cases of invasive breast cancer will be diagnosed in men—approximately 1 percent of all diagnoses—and nearly 500 men will die from it this year, according to the American Cancer Society. However, there have been few prospective studies of breast cancer in men and some clinical trials of new therapies have excluded male patients.

In the first ESMO study, Jean-Sébastien Frénel, MD, of Institut de Cancerologie de l’Ouest in Nantes, and colleagues conducted an analysis of real-life treatment and outcomes among men with breast cancer.

Breast cancer is classified by the type of receptors it expresses. A majority of breast tumors carry hormone receptors for estrogen or progesterone (known as HR positive). Hormones encourage the growth of HR positive cancer, and treatment usually involves hormone therapy. This may include tamoxifen, which blocks estrogen receptors; gonadotropin-releasing hormone (GnRH) analogs such as goserelin (Zoladex) or leuprolide (Lupron), which block signals that stimulate estrogen production; or aromatase inhibitors such as exemestane (Aromasin) or letrozole (Femara), which interfere with estrogen synthesis. Tumors may also express HER2 (human epidermal growth factor receptor 2), making them susceptible to HER2-blocking drugs such as Herceptin (trastuzumab). Triple-negative breast cancer doesn’t express any of these receptors and is harder to treat.

More than three quarters of the men (78.4 percent) had HR positive/HER2 negative breast cancer, higher than the proportion of women (65.6 percent). Men and women were about equally likely to have HER2 positive tumors (17.1 versus 19.0 percent, respectively), but men were much less likely to have triple-negative disease (4.5 versus 15.4 percent). The ongoing study will next assess the prevalence of BRCA mutations, hereditary alterations that raise the risk of breast cancer.

Men and women with metastatic breast cancer generally received similar treatment. About four in 10 men with HR positive/HER2 negative breast cancer (42.9 percent) received first-line hormone therapy. Of these 45 men, 20 received tamoxifen, 20 used an aromatase inhibitor with or without a GnHR analog and seven used other therapies.

The median progression-free survival among these men—meaning they were still alive without worsening of disease—was 9.8 months, which was statistically similar to the median 13.0 months for women of the same age with similar breast cancer classification, metastasis location and treatment history.

Twenty-nine men with HR positive/HER2 negative breast cancer (27.6 percent) were initially treated with chemotherapy. Their median progression-free survival was 6.9 months—again similar to the median 6.3 months for a matched group of women who received this type of treatment.

For all the men in the database, the median overall survival was 41.8 months. This was a somewhat higher than the 34.9 month median for women, but the difference was not statistically significant, meaning it could be attributable to chance.

“We have reported on one of the biggest series of men with metastatic disease, with comprehensive data on their management and outcome with different types of treatment,” Frénel said in an ESMO press release. “Most of the patients receiving hormonal therapy were treated with tamoxifen and the remainder received aromatase inhibitors. But few patients received aromatase inhibitors plus [GnRH] analogs despite some guidelines recommending that they should be given in combination.”

“This new study shows the prognosis of men and women is similar, which is of great value as this justifies our current clinical practice. We currently treat men with breast cancer in a similar way to women, which is now supported by these data,” commented Agnes Jager, MD, of Erasmus Medical University Cancer Institute in Rotterdam. “More detailed information and longer-term follow-up will indicate whether there are characteristics or prognostic factors that are specific for men, which will allow us to change practice in the future.”

The study enrolled 55 men in Germany who were receiving either adjuvant therapy to prevent cancer recurrence after surgery or treatment for metastatic breast cancer that had spread elsewhere in the body. Participants were randomly assigned to one of three regimens for six months:

All of these therapies were “well tolerated with no safety signals,” according to the researchers. Validated questionnaires showed that tamoxifen had little impact on health-related quality of life or sexual function. However, the combination of a GnRH analog plus exemestane had a major negative effect on both measures.

“Tamoxifen monotherapy should be kept as standard hormonal therapy for men with breast cancer. The side effects are moderate, hardly impairing sexual behavior,” Reinisch said in the ESMO press release. “The combination with GnRH influenced patients’ well-being and erectile function profoundly.”

Jager questioned the use of estradiol levels as the study endpoint, noting that suppression at three months “is neither a validated nor a clinically useful surrogate endpoint for the efficacy of endocrine treatment.” She added that the study did not answer whether a GnHR agonist should be given with tamoxifen, a question that is “of great clinical importance” due to the severe side effects of these drugs in men.

Finally, Claudio Zamagni, MD, of Sant’Orsola Malpighi Hospital in Bologna, Italy, presented an analysis of men participating in the CompLEEment-1 trial, which evaluated the aromatase inhibitor letrozole plus Kisqali, a cyclin­dependent kinase inhibitor that blocks both CDK4 and CDK6, proteins that play a role in regulating cell division.

Most people with HR positive breast cancer eventually become resistant to hormone therapy, so researchers are exploring other types of treatment that could prolong sensitivity or overcome resistance.

Of the first 1,008 participants enrolled in the Phase IIIb CompLEEment-1 trial, 20 were men with advanced HR positive/HER2 negative breast cancer. Everyone received Kisqali tablets (600 mg/day in cycles of three weeks on and one week off) plus letrozole (2.5 mg/day). The men also received the GnHR analog goserelin (administered as a monthly implant).

The ESMO poster reported that the treatment demonstrated comparable safety and tolerability in men and women. The most frequent adverse events in men were hot flushes (30 percent), neutropenia or low white blood cell count (20 percent), constipation (20 percent) and elevated liver enzymes (5 to 10 percent). Neutropenia was less common in men than it was in women in MONALEESA-2 (about 60 percent). About a third of the men reduced their dose or temporarily interrupted treatment because of adverse events and two stopped the treatment permanently.

Efficacy data will be reported after longer-term follow-up.

“We can conclude in this subpopulation of men that the tolerability and the expected toxicity with ribociclib in men is no different [than in] women. And this increases our confidence in data obtained in large trials with women in order to translate the results and the applicability to men,” Zamagni said.

“Male breast cancer patients seem to benefit from endocrine therapy to a similar degree as women. Furthermore, these research results add to the current literature suggesting that the addition of GnRH analogs might improve on tamoxifen alone, but studies with clinical endpoints are needed,” Stefan Zimmerman, MD, of Centre Hospitalier Universitaire Vaudois in Switzerland commented in the ESMO press said. “Lastly, it is urgent that strategies that have proven effective in deferring resistance to endocrine therapy in women are explored in men with advanced breast cancer as well, including CDK4/6 inhibitors.”