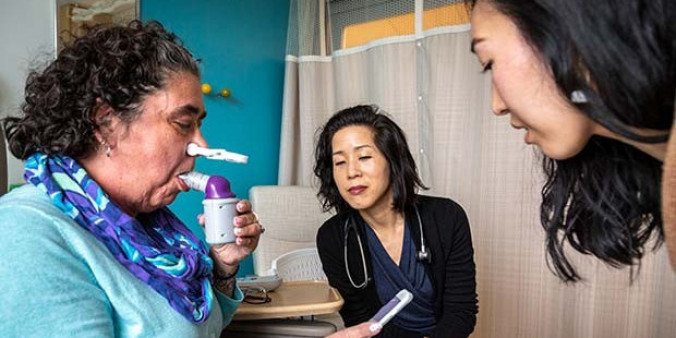 ‘To have your life-threatening cancer cured, and then to die of not being able to breathe? It’s devastating.’

Just to the left of Guang-Shing Cheng, MD’s, office computer is a photo of a smiling young woman. It’s been there for more than a year, always in the background as Cheng writes emails and research proposals and notes in patient records.

It’s been there ever since the young woman, one of the first patients Cheng treated in Seattle, died.

Cheng couldn’t save her. No one could. She suffered from bronchiolitis obliterans syndrome, or BOS, a rare but deadly complication of blood stem cell transplant. That procedure had wiped out her leukemia.

But it also set the stage for BOS, in which scar tissue chokes the tiniest airways in the lungs. The disease causes an irreversible decline in lung function, and Cheng’s patient struggled for years to take a breath. Eventually, BOS took her life.

“To have your life-threatening cancer cured, and then to die of not being able to breathe?” said Cheng, a pulmonologist at Fred Hutchinson Cancer Research Center. “It’s devastating.”

She’s seen that devastation in transplant patients since joining Fred Hutch in 2012. It drives her research into BOS, which often gets diagnosed after a patient starts showing symptoms. But by then, severe and irreversible lung damage has occurred.

Cheng wants to break the cycle of late diagnosis and relentless decline. She’s about to launch a new clinical trial that aims to catch BOS before symptoms start — hopefully paving the way for earlier interventions and better patient outcomes.

The study relies on home spirometry, which is a test that measures how much air a person can exhale. Patients enrolled in the trial will use a small handheld device to check their lung function at home every week. A smartphone app will push those measurements to an online portal, where Cheng and other physicians can closely track changes.

That approach will yield more granular data than the current standard, where transplant patients go to a lab for a lung function test a handful of times a year. But those infrequent tests can’t detect the gradual, often imperceptible drops that precede full-blown BOS symptoms.

The home-based trial, which is being funded by a $600,000 grant from the V Foundation’s Robin Roberts Fund for Cancer Survivorship and a gift from the David and Patricia Giuliani family, will save patients time, money and the inconvenience of travel. And it just might stop a killer.

“If we can understand what the progression of BOS looks like, maybe we can intervene earlier,” Cheng said. “Maybe we can prevent the really severe cases from happening.”

BOS is rare. It’s only seen in about 5 percent of the roughly 9,000 patients who undergo allogenic bone marrow transplant each year, Cheng said. During these life-saving treatments, patients undergo chemotherapy to destroy their diseased bone marrow. Then, a donor’s healthy blood-forming stem cells are given directly into the patient’s bloodstream.

The most well-established risk factor for BOS is chronic graft-versus-host disease, or GVHD. Chronic GVHD is a common side effect of bone marrow and stem cell transplantation where the donor immune cells (the “graft”) attack the patient’s healthy organs in addition to the cancer — in this case, the lungs.

The underlying biology of BOS remains poorly understood. And no one really knows how to identify which patients with GVHD are most at-risk. To help unravel those mysteries, Cheng will collaborate with colleagues across the Hutch, including Geoffrey Hill, MD, an expert in transplantation biology and GVHD, and Michael Boeckh, MD, PhD, an expert in infectious complications of transplant.

With Hill, Cheng will try to pinpoint the molecular pathways that lead to the disease. Meanwhile, a growing body of evidence suggests that certain viral infections might predispose patients to later lung complications. Cheng and Boeckh will be the first to study those links in a prospective way.

But above all, Cheng will keep tabs on how her patients are doing and ask questions of the data: Was this week’s dip in lung function just a blip, caused by a cold or fatigue? Or is it something more ominous?

If she does detect a drop, she can flag it for the patient’s care provider to investigate. She’s already done that with one patient on an earlier pilot trial: Dennis Bolz, who had a blood stem cell transplant to treat a bone marrow disorder called myelodysplastic syndrome.

“The weekly test has been a real comfort,” said his wife, Joycelyn. “We can see the trends. If we hadn’t been part of the study, we might not have known about a dip in lung capacity, which they have been treating.”

Cheng says patients like Dennis motivate her to do everything she can in the clinic to stay one step ahead of BOS. And she’s still motivated by the memory of the patient she couldn’t help, the one whose photo she sees every day in her office. “I’d want her and her family to know that she didn’t die in vain,” Cheng said.

This article was originally published on March 25, 2019, by Hutch News. It is republished with permission.