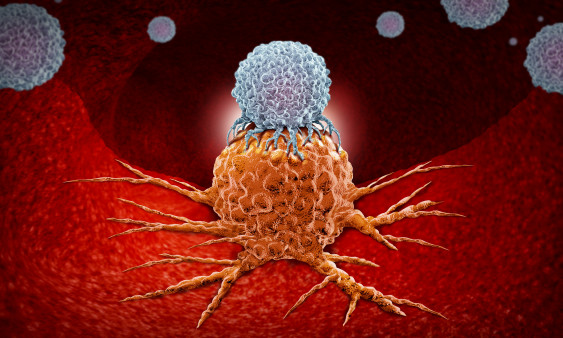 More than 70% of people treated with Abecma, a customized immunotherapy, experienced complete or partial remission.

On March 26, the Food and Drug Administration (FDA) approved Abecma (idecabtagene vicleucel, or ide-cel), a new CAR-T therapy for adults with relapsed or refractory (nonresponsive) multiple myeloma who have tried at four previous lines of therapy.

“While there is no cure for multiple myeloma, the long-term outlook can vary based on the individual’s age and the stage of the condition at the time of diagnosis,” Peter Marks, MD, PhD, director of the FDA’s Center for Biologics Evaluation and Research, said in a press release. “Today’s approval provides a new treatment option for patients who have this uncommon type of cancer.”

Abecma is a “living drug” that reprograms a patient’s own T cells to fight cancer. Chimeric antigen receptor T-cell therapy—better known as CAR-T—involves removing a sample of a patient’s white blood cells, genetically modifying the T cells to recognize and attack their cancer, manufacturing a large number of the modified cells and infusing them back into the body.

Abecma (formerly known as bb2121) was initially discovered by bluebird bio and was jointly developed with Bristol-Myers Squibb (BMS). In February, the FDA approved another new BMS CAR-T therapy, Breyanzi (lisocabtagene maraleucel), which was initially developed by Juno Therapeutics.

Several medications are used to treat multiple myeloma, usually in various combinations. These often lead to remission, but the treatments can stop working, and relapse is common. Abecma is approved for people who have tried four or more prior lines of therapy, including an immunomodulator such as Revlimid (lenalidomide), a proteasome inhibitor such as Kyprolis (carfilzomib) or Velcade (bortezomib), and a monoclonal antibody CD38 inhibitor such as Darzalex (daratumumab). Patients who have tried all three drug classes (known as triple-class exposed) are unlikely to respond to further treatment attempts and have poor survival prospects.

Results from an early study presented in 2018 showed that nearly all patients treated with Abecma experienced myeloma remission, with a response duration of nearly a year. This laid the groundwork for the larger Phase II KarMMa trial to support FDA approval.

KarMMa included 127 patients with relapsed or refractory multiple myeloma who had received at least three prior lines of therapy including an immunomodulator, a proteasome inhibitor and a CD38 inhibitor; almost all had received autologous (self-donated) stem cell transplants. Before receiving a single infusion of Abecma, they underwent conditioning chemotherapy to kill off existing immune cells and make room for the new ones.

“In the KarMMa study, ide-cel elicited rapid responses in the majority of patients, and these deep and durable responses were observed in patients with triple-class exposed and refractory multiple myeloma,” Nikhil Munshi, MD, of the Jerome Lipper Multiple Myeloma Center at Dana-Farber Cancer Institute in Boston, said in a BMS and bluebird press release. “As a treating physician, I often work with patients with relapsed or refractory multiple myeloma who are in critical need of new therapies. Now, with the approval of ide-cel as the first anti-BCMA CAR-T cell therapy, we are excited to finally be able to offer patients a new, effective personalized treatment option that is delivered through a single infusion.”

CAR-T therapy can cause serious side effects. Unleashing genetically modified T cells can trigger a potentially life-threatening immune reaction known as cytokine release syndrome (CRS), which can lead to fever and chills, falling blood pressure, organ failure and neurologic toxicity. In the KarMMa trial, 85% of patients experienced CRS of any grade, 9% had a severe case and one person died due to CRS. More than a quarter (28%) experienced neurotoxicity, including five severe cases.

Abecma will be custom-produced for each patient at BMS’s cellular immunotherapy manufacturing facility in Summit, New Jersey. The turnaround time from collection of a patients T cells to infusion of the modified CAR-T cells is around three weeks. Abecma will be available at certified centers where staff have been trained to manage CRS and neurologic toxicities.