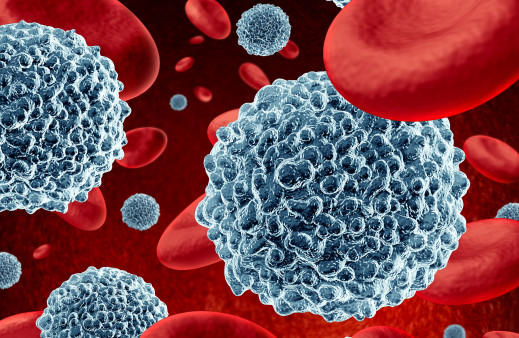 The Food and Drug Administration (FDA) has granted accelerated approval of Polivy (polatuzumab vedotin-piiq) for previously treated adults with relapsed or refractory (nonresponsive) diffuse large B-cell lymphoma (DLBCL) in combination with bendamustine and a rituximab product such as Rituxan. This is the first chemotherapy regimen approved for these patients, according to the FDA.

DLBCL is the most common type of non-Hodgkin lymphoma. Although it often responds to standard first-line treatment with combination chemotherapy and the CD20-targeted monoclonal antibody Rituxan, about 40% of patients relapse, at which point treatment options are limited and survival is typically short.

Polivy consists of an antibody that binds to CD79b, a receptor protein on most malignant B cells, combined with the chemotherapy drug monomethyl auristatin E. This drug is too toxic to use by itself, but the antibody carries it directly to cancer cells, reducing harm to normal cells. The drug disrupts cell structures known as microtubules, which halts cell division and causes apoptosis, or cell suicide.

“Antibody-drug conjugates are an emerging class of targeted immunotherapies for cancer,” Richard Pazdur, MD, director of the FDA’s Oncology Center of Excellence, said in an agency press release. “Today’s approval of Polivy provides an alternative option for patients in whom multiple treatments have not worked.”

This approval is supported by findings from a randomized Phase Ib/II clinical trial that included 80 people with relapsed or refractory DLBCL who had tried at least one prior treatment and were not eligible for bone marrow stem cell transplants. They were randomly assigned to receive Polivy plus the chemotherapy drug bendamustine and Rituxan or else bendamustine and Rituxan without Polivy.

As reported at last year’s American Society of Hematology annual meeting, the complete response rate, meaning full remission according to PET scans, was 40% for those treated with the Polivy combination compared with 18% for those who received bendamustine and Rituxan alone. The overall response rates—considering complete and partial responses together—were 63% and 25%, respectively.

Among the 25 people treated with Polivy who achieved partial or complete responses, 16 (64%) had a response duration of at least six months and 12 (48%) were still responding after a year. The median progression-free survival was 11.1 months with the triple regimen versus 3.7 months with the dual regimen. Estimated median overall survival was 12.4 months versus 4.7 months, respectively.

About two thirds of people treated with Polivy in this study experienced serious adverse events, mostly infections. The most common adverse events associated with Polivy include peripheral neuropathy, fatigue, diarrhea, fever and decreased appetite. Polivy can cause depletion of red blood cells (anemia), white blood cells (neutropenia) and platelets (thrombocytopenia), which can lead to infections and easy bleeding. Potentially serious side effects may include opportunistic infections, liver toxicity, infusion reactions and tumor lysis syndrome, or metabolic abnormalities that can occur when many cancer cells are killed at once. Polivy can cause fetal harm if used during pregnancy.

Polivy is given as an intravenous infusion administered every 21 days for six cycles. The recommended dose is 1.8 milligrams per kilogram of body weight. The Polivy label recommends pretreatment with medications to manage allergic reactions and fever; some people may also need prophylaxis for pneumocystis pneumonia and other infections due to low white blood cell counts.

Polivy for DLBCL received FDA priority review status, a breakthrough therapy designation and an orphan drug designation. This indication was granted accelerated approval based on the complete response rate; continued approval may be contingent upon the drug showing a longer-term clinical benefit in a confirmatory trial.

“Despite meaningful progress in the treatment of diffuse large B-cell lymphoma, treatment options are very limited when the disease is refractory to or recurrent after multiple regimens,” Genentech chief medical officer Sandra Horning, MD, said in a company press release. “Today’s approval of this Polivy combination will provide a novel treatment that is both immediately available and very much needed for people with this aggressive disease.”

Genentech said it will offer a patient assistance program for people using Polivy and Rituxan through Genentech Access Solutions (866-422-2377 or http://www.Genentech-Access.com).