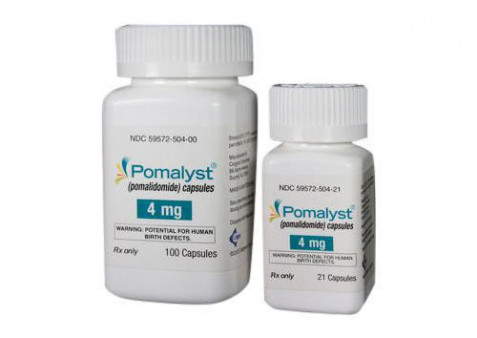 The immune-modulating drug was approved to treat the rare cancer in HIV-positive and HIV-negative people.

On May 14, the Food and Drug Administration (FDA) granted accelerated approval of pomalidomide (Pomalyst) for the treatment of AIDS-related Kaposi sarcoma (KS) in HIV-positive who are not responding to antiretroviral therapy as well as for KS in HIV-negative people. It is the first new therapy approved for KS in more than 20 years.

In a Phase I/II study, the overall response rate among people treated with Pomalyst—meaning complete or partial tumor shrinkage—was 71%, including 14% with complete remission. Half of the patients who responded were still doing so more than a year later.

“Patients with Kaposi sarcoma have had few options to manage their disease for two decades,” Diane McDowell, MD, of Bristol Myers Squibb said in a company press release. “We’re excited that the additional research into Pomalyst in this rare disease area has resulted in our ability to provide a much-needed oral treatment option for patients.”

Kaposi sarcoma involves the uncontrolled growth of cells that line blood and lymph vessels. It usually causes red or purple skin lesions, but it can also affect the mouth and internal organs including the lymph nodes, lungs and digestive system. It is caused by Kaposi sarcoma-associated herpesvirus, also known as human herpesvirus type 8. One of the first observed manifestations of AIDS, it has decreased dramatically among people with HIV in the era of effective antiretroviral treatment, but it remains the most common AIDS-defining cancer. KS also occurs in older HIV-negative men of Mediterranean and Jewish descent and younger men in Africa. KS is rarely seen in women.

Pomalyst is an immunomodulatory drug related to thalidomide. It boosts immune function by promoting the activity of T-cells and natural killer cells. In addition, it inhibits the growth of cancer cells and blocks development of blood vessels that feed tumors. It was previously approved for multiple myeloma.

The new approval was supported by findings from Study 12-C-0047, conducted by the National Cancer Institute (NCI). This open-label study included 18 HIV-positive and 10 HIV-negative people with KS. Most had advanced disease, but those with symptomatic KS affecting their lungs or internal organs were excluded, as were those with a history of blood clots.

All participants received 5 milligrams of oral Pomalyst once daily on days 1 through 21 of each 28-day cycle until they experienced disease progression or unacceptable side effects. They also received daily aspirin to reduce the risk of blood clots. All the HIV-positive participants were taking combination antiretroviral therapy.

“Pomalyst has shown positive results in Kaposi sarcoma patients, regardless of their HIV status,” said Robert Yarchoan, MD, chief of the NCI’s HIV and AIDS Malignancy Branch. “Also, it provides a therapy that is taken orally and works by a different mechanism of action than the cytotoxic chemotherapy drugs generally used to treat Kaposi sarcoma.”

Pomalyst is generally safe but side effects are common. In Study 12-C-0047, 11% of participants stopped treatment due to adverse events.

Less common but more serious side effects include deep vein thrombosis (blood clots), pulmonary embolism, heart attacks and strokes. Like thalidomide, Pomalyst can cause severe birth defects if used during pregnancy, and people of childbearing potential must use reliable contraception.

Drugs that receive accelerated approval based on response rates in early studies are expected to undergo further testing in larger randomized trials to confirm clinical benefits such as improved survival, and the FDA can rescind approval if they don’t measure up.