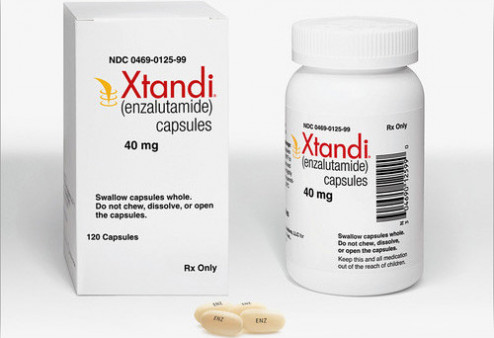 The Food and Drug Administration (FDA) has approved Xtandi (enzalutamide) for the treatment of prostate cancer that does not respond to standard hormone therapy but has not yet spread elsewhere in the body, a process known as metastasis. The drug was previously approved for nonresponsive metastatic prostate cancer.

Xtandi, from Astellas and Pfizer, blocks the action of androgens, or male hormones that can stimulate the growth of prostate cancer.

About 164,700 men in the United States will develop prostate cancer and about 29,400 will die of it this year, according to the American Cancer Society, making it the second leading cause of cancer-related death in men.

Prostate cancer is typically treated with surgery or radiation, often followed by androgen deprivation therapy (ADT). This type of treatment—which now usually involves medication to stop hormone production rather than surgical castration, or removal of the testicles—deprives tumors of testosterone that helps them grow. But prostate cancer often develops resistance to first-line ADT and progresses despite low testosterone levels, a characteristic known as being castration-resistant.

Drugs like Xtandi, which interfere with androgen receptor signaling, block the action of male hormones in the body. Xtandi has been used to treat metastatic castration-resistant prostate cancer (CRPC) since 2012. Until recently, however, there were no approved therapies for men who show no evidence of cancer spread on imaging tests, but who are considered to be at high risk due to rising levels of prostate specific antigen (PSA), a biomarker associated with disease progression. A similar drug, Erleada (apalutamide), was approved earlier this year for nonmetastatic CRPC, but it is not indicated for metastatic cancer.

As reported at the American Society of Clinical Oncology (ASCO) Genitourinary Cancers Symposium in February Xtandi and Erleada both increased the time it took for cancer to spread in men with high-risk prostate cancer that has stopped responding to ADT.

The Phase III PROSPER trial included 1,401 men with CPRC; the median age was 74. At study entry they were on ADT with testosterone levels of 50 nanograms per deciliter or less and PSA levels of at least 2 nanograms per milliliter; the median PSA doubling time was about 4 months. Participants stayed on ADT and were randomly assigned to add either once-daily oral Xtandi or a placebo.

Xtandi significantly delayed the spread of prostate cancer, meaning the difference was probably not attributable to chance alone. Men taking Xtandi were about half as likely as those taking the placebo to experience disease progression or death (23 percent versus 49 percent). Median metastasis-free survival times were 36.6 months and 14.7 months, respectively. Men taking Xtandi also had a longer time until they saw rising PSA levels or needed to start another type of therapy. Although it is too soon to determine overall survival because a majority of patients are still alive, interim data appear to favor Xtandi.

“With today’s approval, there is now a new option for men with nonmetastatic CRPC, who are in between the failure of androgen deprivation therapy resulting in CRPC and the onset of metastatic disease,” Jonathan Simons, MD, of the Prostate Cancer Foundation said in an Astellas/Pfizer press release.

Options to treat high-risk nonmetastatic CRPC are important because some patients may develop “micrometastases” that are too small to show up on imaging scans, according to Maha Hussain, MD, of Northwestern University Feinberg School of Medicine, who presented the PROSPER findings at the ASCO symposium. Treatment at the earliest stage of cancer progression—even before metastasis is detectable—may lead to better outcomes.