Data show that 1 in 5 men and women worldwide develop cancer during their lifetime, and 1 in 8 men and 1 in 11 women die from the disease.

Cancer ranks as a leading cause of death in every country in the world, and, for the first time, female breast cancer is the most commonly diagnosed cancer, overtaking lung cancer, according to a collaborative report, Global Cancer Statistics 2020, from the American Cancer Society (ACS) and the International Agency for Research on Cancer (IARC). Data show that 1 in 5 men and women worldwide develop cancer during their lifetime, and 1 in 8 men and 1 in 11 women die from the disease.

The article describes cancer incidence and mortality at the global level and according to sex, geography, and levels of social and economic development, and discusses associated risk factors and prospects for prevention for each of 10 major cancer types, representing more than 60% of the newly diagnosed cancer cases and more than 70% of deaths from cancer. 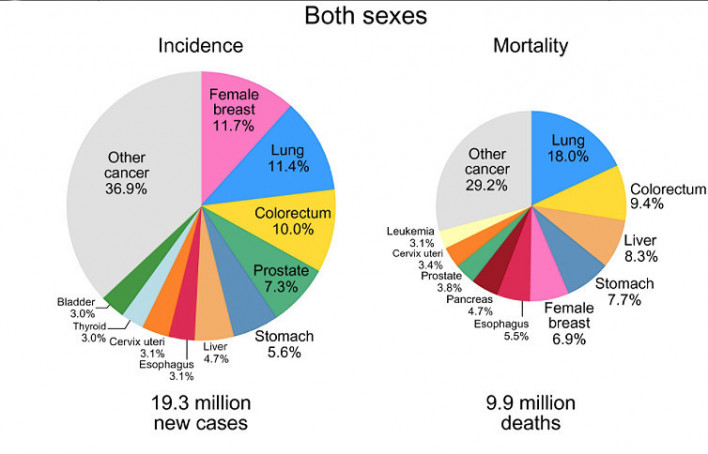 Distribution of Cases and Deaths for the Top 10 Most Common Cancers in 2020. Source: GLOBOCAN 2020.Courtesy of American Cancer Society

The incidence of breast cancer is increasing in countries where rates of breast cancer have been historically low. “Dramatic changes in lifestyle and built environment have had an impact on the prevalence of breast cancer risk factors such as excess body weight, physical inactivity, alcohol consumption, postponement of childbearing, fewer childbirths, and less breastfeeding,” the authors noted. “The increasing prevalence of these factors associated with social and economic transition results in a convergence toward the risk factor profile of transitioned countries and is narrowing international gaps in the breast cancer morbidity.”

Death rates of breast cancer among women in transitioning countries were even higher compared with the rates among women in transitioned countries (15 and 12.8 per 100,000, respectively), despite the substantially lower incidence rates (29.7 and 55.9 per 100,000, respectively). “As the poor outcome in these countries is largely attributable to a late-stage presentation, efforts to promote early detection, followed by timely and appropriate treatment, are urgently needed through the implementation of evidence-based and resource-stratified guidelines,” said Hyuna Sung, PhD, lead author of the report  and Principal Scientist at the ACS.

Data show that lung cancer remained the leading cause of cancer death with an estimated 1.8 million deaths (18%), followed by colorectal (9.4%), liver (8.3%), stomach (7.7%), and female breast (6.9%) cancers. Lung cancer death rates are 3 to 4 times higher in transitioned countries than in transitioning countries, however, this pattern may well change as the tobacco epidemic evolves given that 80% of smokers reside in low- and middle- income countries. With about two-thirds of lung cancer deaths worldwide attributable to smoking, the disease can be largely prevented through effective tobacco control policies and regulations.

According to the report, an estimated 28.4 million new cancer cases are projected to occur in 2040, a 47% rise from 2020 globally. Transitioning countries are experiencing a larger relative increase in cancer incidence (64% to 95%) versus transitioned (32% to 56%) countries due to demographic changes. The authors state that this may be further exacerbated by increasing risk factors associated with globalization and a growing economy. The authors warn that the growing rate of incidence could overwhelm health care systems, if left uncontrolled. Efforts to build a sustainable infrastructure for the dissemination of proven cancer prevention measures and the provision of cancer care in transitioning countries are critical for global cancer control.

Data in this report do not reflect the impact of the COVID-19 pandemic as they are based on cancer data collected in earlier years, and the full extent of the impact in different world regions is currently unknown. According to the report, delays in diagnosis and treatment, including suspension of screening programs and reduced availability of and access to care, are anticipated to cause a short-term decline in cancer incidence followed by increases in advanced-stage diagnoses and cancer mortality in some settings.

“The burden of cancer incidence and mortality is rapidly growing worldwide, and reflects both aging and growth of the population, as well as changes in the prevalence and distribution of the main risk factors for cancer, several of which are associated with socioeconomic development,” said Freddie Bray, BSc(Hons), MSc, PhD, senior author of the report and Head of the Section of Cancer Surveillance at IARC. “Effective and resource-sensitive preventative and curative interventions are pertinent for cancer diagnosis. Tailored integration into health planning can serve to reduce the global burden of cancer and narrow the evident cancer inequities between transitioning and transitioned countries observed today.”

This press release was published on the American Cancer Society website on February 4, 2021.