Breast cancer survivor Marianne Sarcich’s reconstruction surgery was denied by insurance. And denied again. But she persisted and won.

Have you ever received a denial from your insurance company? Me too. Just days before my scheduled breast reconstruction surgery. You probably know how I felt. Blindsided. Frustrated. Angry.

I won’t make you read this whole article to learn that I appealed that denial and won. So now I’m one of the 50% of patients who win their insurance appeals. You read that right. 50% of the patients who appeal, win. So, if you are holding an insurance denial letter, join me and become among the 50% with me. It’s possible.

The first thing for you to know is you have options and rights; knowing that can bring you hope. It did for me. And that hope kept me feeling empowered, despite being heavily burdened by the denial. Because I knew I had the right to appeal. And, I knew that I was to appeal. That lit the fire in me that fueled my entire appeal process.

I needed the fuel because my case was no easy win. It was an unusual case that took from early December 2020 to nearly the end of February 2021 and included two denials before the final decision in my favor. It was a lot of effort. It was a lot of time. And, a lot of anxiety.  And still. Still I say it was worth it. If only to have my voice heard. And to feel I had done everything in my power to advocate for myself and right what I felt was an injustice. And of course, to get the surgery done, so I could live my life feeling like me again.

Symmetry was always the plan — of my breasts and my thighs.

I went into my first surgery in July knowing that there would be a second surgery to get my symmetry.  Can you guess what insurance denied? Yup. My thigh symmetry. They approved the fat grafting for my breast symmetry, so that’s what I had done in December. But I headed into that surgery already having started my patient appeal. I did it by calling the 800 number for customer service on the back of my insurance card. That part was easy.

An official appeal file was opened in my name, and I was assigned an appeal coordinator within my insurance company. The process — the insurance company would review the denial and let me know their decision.

Meanwhile, of course, I Googled. What else was out there to help me? Triage Cancer popped up. I’d forgotten about them. You know, no memory since cancer. Part of their mission is to help the cancer community navigate legal issues. Triage Cancer CEO, Joanna Morales, talked me through my appeal and answered my questions. And honestly, just having her show up when I sent out a call for help by email meant the world to me. It boosted my resolve and my spirit just knowing she was on my side. And I was not in this alone.

To ensure my voice was heard as insurance reviewed my case, I submitted a patient statement to my appeal file by email. What was in that statement? My take on why the surgery should be approved. I wrote it with as much persuasion and heart as I could. It didn’t work. My appeal was denied. But I had more options, I opened a second level patient appeal within my insurance company. Again doing that was a conversation, this time with my appeal coordinator. And I was assigned a new appeal coordinator. My second appeal would be done by a review committee. And I was invited to state my case during the committee meeting.

Because of the pandemic, it was done by phone. I rewrote my patient statement to make it more powerful, submitted it again by email and read it at the committee meeting. They asked me a few questions and then thanked me for my time.

My insurance just did things a little differently. And yes, I was assigned yet another appeals coordinator. Because this was my last shot, I really dug in. I did everything I could think of to make my appeal case undeniably winnable. I decided the best way to do that was to think like an appeal reviewer. Whose voice would they listen to? What argument would sway them? What words? I was under a legally mandated deadline to submit everything within a certain number of days from the start of my external appeal.

So I began doing what I should have done with the first appeal. I went back to the denial letters. I pieced apart their reasons for denying each of my appeals. It kept coming down to their notion that the surgery was not medically necessary. All right, then. What would prove without a doubt that the surgery was medically necessary? This is where I spent my time. Methodically building my argument from what I thought was their point of view. And at the same time, coming up with my list of allies whom I felt would have the most influence on the appeal reviewers.

The first question I tackled was what would physically make it a medical necessity? I contacted my physical therapist and asked if I could potentially suffer long-term mobility issues from having asymmetrical thighs. She looked into it. Her final answer was probably not. Okay. What would emotionally make it medically necessary? Because I am being treated for post-cancer anxiety, I contacted both my social worker and my oncologist. I asked them if they thought that my history with anxiety and my emotional need for symmetry made the surgery medically necessary. They both agreed and two new letters got submitted to my appeal file by email.

Then I moved into thinking outside of my own situation. Who else has had the surgery and had it covered by their insurance? I asked my plastic surgeon, and, yes, she’s had other patients have it approved. A third letter for my appeal file. And, through social media, I found other patients who had the same surgery covered by insurance. I thought I had hit the jackpot with this and went on to gather the names of their plastic surgeons.

I only needed to contact the first surgeon to find out they are not allowed to submit letters to an appeal file that is not for their own patient. moved on to the law. Because a federal law mandates most private health insurance companies cover breast reconstruction. And while I had already mentioned this in my previous patient statements, it was not enough. Who could amplify this message and my voice?

I turned to the Pennsylvania Breast Cancer Coalition (PBCC) and their Patient Advocate. They are known for their success with legislative advocacy. Even better, PBCC helped to create and pass the original Pennsylvania state law to mandate breast reconstruction coverage. Within a few days of my request, I had a letter from the PBCC president and founder for my appeal file.

Then, after ensuring by email that all of these letters were indeed in my appeal file, the waiting game began. And something akin to scanxiety set in. Now it was the insurance company with the legally mandated deadline. I knew I would have their decision in 45 days, which I once again asked them to email me. Instead, my insurance company’s external appeal coordinator called me one morning late in February with the verdict.

And I could finally exhale. My plastic surgeon didn’t have an opening until April 13th. More waiting. This waiting was probably the most difficult, perhaps because I was so close to my prize — symmetry. So, it took me from the beginning of December until the middle of April to make this surgery happen.

It’s quite the story of the possibilities when it comes to insurance claim denials and of what you can do for yourself. You have the power to reverse an insurance denial. Hold on to that and use it. Right now, less than .2% of patients wield that power and even appeal denials.

Marianne Sarcich is a breast cancer survivor and advocate and founder of the peer support group In This Together Philly Wilmington. Her affiliations include Living Beyond Breast Cancer, National Coalition for Cancer Survivorship, Sharsheret, Society for Integrative Oncology, University of Delaware, AnaOno and Triage Cancer.

This article was originally published by Triage Cancer. It is used by permission. 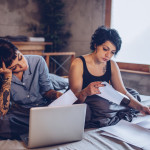