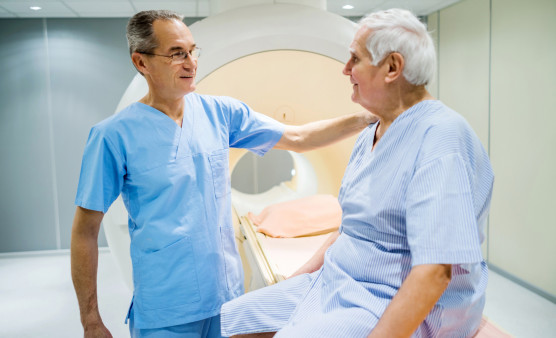 California has the third-lowest rate of new lung cancer cases in U.S., but the state performs poorly in treating and screening for the disease.

It was a bewildering moment for Zach Jump, the American Lung Association’s national director of epidemiology and statistics. The numbers leaped off the computer screen and prompted an immediate question:

How could California, a leader in reducing lung cancer cases, fall so short on early diagnosis and treatment of the disease?

“It’s like you’d found the needle in the haystack of results,” said Jump. “I don’t know if anyone knew this was going to show up.”

It was right there in the association’s annual “State of Lung Cancer” report, published in November: California had the third-lowest rate of new lung cancer cases in the country, a laudable achievement. But among state residents diagnosed with the disease, nearly a quarter received no treatment — a dismal showing that landed California near the bottom of the heap. Worse, California screened high-risk patients at a lower rate than every state but Nevada.

Nationally, the report showed a dramatic increase in the five-year survival rate of people diagnosed with the disease. That finding was reinforced by an American Cancer Society report released last month showing that from 2016 to 2017, the U.S. experienced the largest single-year drop in cancer mortality ever reported — driven by a decline in deaths from lung cancer.

California’s low rate of new lung cancer cases makes sense given its aggressive anti-tobacco laws and high taxes on tobacco products. Between 85% and 90% of people who die of lung cancer in the U.S. were smokers, and “California is the poster child for tobacco control,” said Jump.

But what explains the state’s dramatically weaker performance on early diagnosis and treatment?

The answer is complicated in a state as large as California, but lung cancer experts agree on the influence of several factors: the state’s large income inequality, broad cultural and linguistic diversity, inconsistency of health care access by region — and neighborhood — and a financial reluctance by many medical professionals to treat poor people, who smoke at higher rates than those of the general population.

“People aren’t getting screened in the places where the incidence of smoking is the highest,” said Jorge Nieva, MD, an oncologist with Keck Medicine of the University of Southern California.

A low-dose CT scan, the only recommended screening exam for lung cancer, is highly effective, research shows. In one large clinical trial, it reduced lung cancer deaths by 20% among people at high risk, who were defined as those between ages 55 and 80 with a history of heavy smoking, even if they had quit within the previous 15 years.

The lung association study shows that just 4.2% of patients in the United States who are at high risk for lung cancer get screened for it — seen as an alarmingly low figure by those who work in the area of prevention. But compared with that low national figure, California’s screening rate is woefully inadequate: just 0.9%.

Performing the exam is profitable — but only if insurance payments are high enough. Medi-Cal, the government-funded insurance program for low-income people that covers about a third of all Californians, has long paid rates far below the national average.

Not surprisingly, scans are performed much more commonly in areas where people are likely to have good private insurance. “Unfortunately, it’s the population that doesn’t have great insurance that needs the screening the most,” said Nieva.

Medical experts say the state’s low screening numbers help explain why 24% of California’s diagnosed lung cancer patients receive no treatment at all, well above the national average of around 15%. Without adequate screening, lung cancer generally is discovered at later stages, when treatment is far less effective and many clinical trials aren’t offered.

Other factors weigh heavily on California’s ability to boost screening and treatment, according to people with deep experience in the field. Among them:

Cultural barriers. Especially among immigrant groups, “we need culturally sensitive approaches that include materials, educational tools, awareness campaigns and doctors who can speak to people in their native languages,” said Laurie Fenton Ambrose, president and CEO of the GO2 Foundation for Lung Cancer, a patient advocacy group.

Homelessness. As California’s unhoused population has swelled to over 150,000, health care providers have more difficulty reaching those in need of services. “Many of the 60,000 homeless in L.A. County would very likely be considered at risk for lung cancer, and they are not being screened,” said Steven Dubinett, MD a pulmonologist at UCLA.

Access to primary care. “California has some uniqueness in how hard it is to see a doctor in lots of parts of the state,” Nieva said. “That’s incredibly important when it comes to getting things early on, like that persistent cough you’ve had for a few months.”

Lack of statewide coordination. The state’s Comprehensive Cancer Control Plan hasn’t been updated in almost a decade. “It is inefficient and slow to improve. You don’t even have a plan that lays out its goals for fighting lung cancer,” Fenton Ambrose said.

Numerous personal factors can also influence whether patients get screening and treatment, experts say. Some people may be reluctant to be tested for fear of learning they have a terrible disease — including medical problems unrelated to lung cancer that the exam might uncover.

Nieva and Fenton Ambrose said the stigma attached to lung cancer — the notion that patients caused it themselves by smoking — can contribute to a sense of fatalism in both patients and their doctors.

Dubinett favors rolling out screening programs throughout the state, especially in areas where access to health care is spotty. Given the effectiveness of the exams and follow-up treatment if lung cancer is detected early, the state might well improve upon its five-year survival rate for lung cancer patients, which stands at 21.5% — roughly matching the national average of 21.7%, according to the lung association.

Such an initiative may fall to the state, with help from academic medical systems including USC and UCLA.

“This should be getting done everywhere, and at a 100% rate,” Nieva said. The fact that it’s not is “a real indictment of our health care system.”

This article was originally published on February 25, 2020, by Kaiser Health News. It is republished with permission.