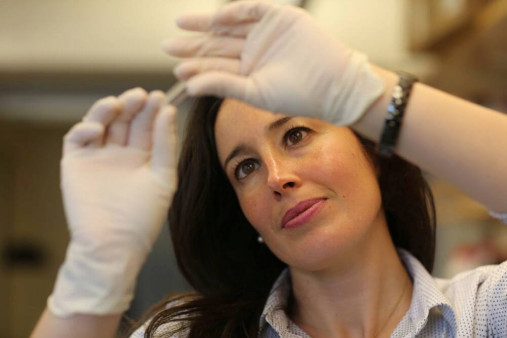 Greater Understanding of How Cells Access Their DNA May Aid Treatments

These findings may indicate a new route to on-target therapeutic inhibition, a running goal for the academic and pharmaceutical communities.

If you could somehow unroll the DNA from a single one of our cells, the tiny thread would stretch about two meters. Our cells do just the opposite, spooling their DNA astonishingly tightly around proteins, into packages known as nucleosomes. These packages, which together make up our chromatin, need to dynamically open and close at the right times so that cells can express the correct genes and produce the correct proteins.

Opening the chromatin is a job for a group of large molecular structures called chromatin remodeling complexes, and mutations in these complexes are extensively linked to disease.

Kadoch’s lab explores the ways in which disease-associated genetic alterations in these complexes affect their ability to function properly. The lab’s latest results, published November 20 in Cell, drill down into the details on how the opening mechanisms fail in Coffin-Siris syndrome and many cancers due to a mutation in one specific region of the complex. This work not only uncovers the disease mechanism but also sheds new structural and biochemical light on how these complexes work in normal settings, offering clues toward new strategies for therapeutic modulation.

“BAF chromatin remodeling complexes sit on the nucleosome like clamps, and they essentially regulate how open or closed DNA is,” Kadoch says. “Wherever these complexes go, genes, in general, turn on. It’s therefore really important to have the complexes sitting at the right spots throughout your two meters of DNA. Because activation of the wrong genes at the wrong times, can result in devastating consequences, including cancer and developmental disorders.”

If a cell that otherwise is on the road to becoming, say, a mature muscle cell gets such a mutation, it likely won’t mature or function normally, because it can’t turn on the appropriate genes, she says. Cells stuck in earlier developmental states rather than becoming fully differentiated typically “get stuck” in a more rapidly multiplying state — a process that can produce certain cancers.

Kadoch, lead author Alfredo Valencia, and their colleagues brought a combination of biochemistry, structural biology and genomics experiments to probe deeper into the roles of BAF complexes.

“This research is an example of how integrating those efforts, which is the name of the game in our lab, can really pay off for understanding fundamental biologic and disease mechanisms,” she says.

Working with cancer cells, the Dana-Farber researchers went deep into the structure of the subunit of BAF complexes that goes awry in Coffin-Siris syndrome, identifying a region conserved back to yeast that mediates a critical contact point between BAF and nucleosomes. Next, they discovered that the complexes with alterations in this region would target to the right spots on DNA but wouldn’t be able to open chromatin properly once they got there, and hence failed to activate the right genes.

The scientists also wanted to investigate how such mutations in the BAF complexes could produce the Coffin-Siris intellectual disability syndrome. Here they created what are called “induced pluripotent stem cells” to make human stem cells with a mutation similar to those in people with the syndrome. When the researchers started modifying these stem cells along the developmental path that leads toward neurons, they found that many of the necessary genes indeed weren’t turned on fully.

“This defect is just subtle enough that these individuals still develop to term, but with major abnormalities across several organ systems,” Kadoch says.

Addressing this genetic defect in individuals with Coffin-Siris syndrome might require generating some kind of “molecular glue” for the BAF complex to fix its broken interaction, quite a difficult scientific challenge today, she notes.

However, in the case of several cancers known to be dependent on BAF complex activities, these findings may indicate a new route to on-target therapeutic inhibition, a running goal for the academic and pharmaceutical communities at large.

“Intriguingly, right after we did this project, a clinician here at Dana-Farber approached me with a case of a patient with a very aggressive carcinoma, whose only notable mutation was exactly in this region of the BAF complex,” Kadoch says. “So there’s immediate relevance for how we understand the mechanism of such cancers. And a better understanding might ultimately allow us to properly stratify patients and identify the best therapeutic approaches for them given the precise mechanisms governing their cancers.”

This article was originally published on December 3, 2019, by Dana-Farber Cancer Institute. It is republished with permission.