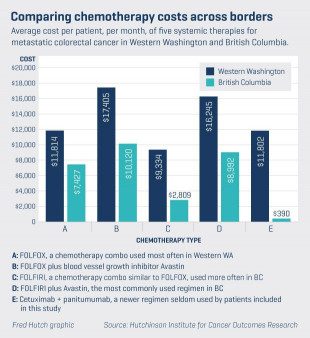 At Half the Cost, Canada Colorectal Cancer Survival Similar to U.S.

In a rare comparison of cancer care in neighboring regions of the U.S. and Canada, a new study found Americans were paying twice as much for similar colorectal cancer treatments, with no advantage in survival rates.

It is well known that the U.S. spends far more on health care than its neighbor to the north. However, the findings by scientists at Seattle’s Fred Hutchinson Cancer Research Center and colleagues from Vancouver, British Columbia, may be the first to measure costs and survival rates for a specific disease among demographically similar groups treated in the two countries.

“Beyond the chemotherapy costs, which you could imagine are going to be higher here, the novel piece is around treatments and survival,” said Fred Hutch’s Dr. Veena Shankaran, a member of the Hutchinson Institute for Outcomes Research, or HICOR, and senior author of the study. The findings will be shared in a poster presentation featured during a press briefing on opening day of the 2018 annual meeting of the American Society of Clinical Oncology in Chicago. 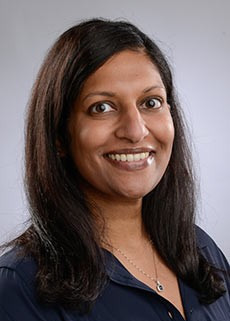 “It is not a complex study conceptually, but enlightening when you put numbers to it,” she said prior to the conference.

Among patients newly diagnosed with metastatic colorectal cancer, the study found average per-patient costs across all chemotherapy treatments were $12,345 per month in Western Washington state and $6,195 per month in neighboring British Columbia. The poster notes that “overall survival was no different between the two locations.”

Metastatic colorectal cancer, in which cancer cells have spread to other parts of the body, is particularly deadly, although chemotherapy treatments do extend survival time for most patients. Median survival times for patients starting treatment during the study period was 21.4 months in Washington, 22.1 months in the Canadian province.

The HICOR researchers at Fred Hutch looked at private insurance data from 13 counties in the Seattle region, while researchers at BC Cancer Agency in Vancouver analyzed data from the Canadian province, which operates a single-payer system like Medicare in the U.S., but covering all its citizens.

The study showed that chemotherapy was more likely to be provided on the U.S.—in 79 percent of patients compared to 68 percent of those in Canada. The study does not address why fewer patients were treated in Canada, although the BC patients as a group were older than those in the U.S. Among those who were not treated with chemotherapy, survival was substantially shorter, but also similar between the two regions: 5.4 months in Western Washington and 6.1 months in BC.

Studies comparing the two health systems are difficult to do because laws governing privacy effectively bar sharing patient data across international lines. However, this study was made possible because teams of collaborating investigators worked separately to analyze similar questions on each side of the border. The final analysis was completed using the findings of the HICOR team led by Shankaran and a BC Cancer Agency team led by Dr. Hagen Kennecke, who is now Medical Director of the Floyd & Delores Jones Cancer Institute at Virginia Mason in Seattle.

“The raw data never crossed the border,” said Kennecke. “It was never mixed.”

A Canadian oncologist now working in the U.S., Kennecke was careful not to judge whether one system was superior to the other. “Both systems work,” he said. “Patients are getting treated and surviving much longer than they used to. The U.S. system is more expensive and treats more patients. One system is more cost-effective than the other. We can learn from each other.”

Younger Patients in the American Cohort

Canadian researchers pulled data from 1,622 patients from the entire province of British Columbia diagnosed with metastatic colorectal cancer between 2010 and 2012. The American team used a smaller number of patients (575) who entered chemotherapy treatment between 2010 and 2016, and lived in 13 Western Washington counties. To assure similar cost comparisons, the team converted all cost data from both countries into U.S. dollars as valued in 2009.

The Washington patients were somewhat younger than the Canadian cohort because the HICOR researchers, at the time the analysis was done, did not have access to U.S. Medicare data. Instead, they relied on claims data from two large private insurers, Premera Blue Cross and Regence Blue Shield, which only had data for Medicare patients who also had Medicare supplement policies.

The researchers acknowledge that differences in median age (66 for Canadians, 60 for Americans) might have had subtle effects on direct comparisons of the two populations, so they are continuing to work on the project. The HICOR team now has access to the Medicare data, and will submit the results of their next analysis for publication in a peer-reviewed academic journal.

Indeed, it is unusual for a poster presentation to attract the press attention this one has. A likely reason for the attention now: In the ongoing debate over how to reform the U.S. health care system, proposals to adopt a Canadian-style single-payer system have gained traction in mainstream politics. Last fall, eight likely contenders for the Democratic nomination in 2020 endorsed Vermont Senator Bernie Sanders’ single-payer health care plan.

“Obviously the most glaring contrast in findings are for costs, which is not surprising but nevertheless demonstrates once more that you don’t have to spend what the U.S. spends on health to achieve outcomes that are at least as good as here,” said HICOR Co-Director Dr. Gary Lyman. He was not involved in this study but frequently studies the high cost of health care and its impact.

Lyman noted that the Western Washington data was derived from those privately insured. It does not include outcomes or costs for U.S. patients who were uninsured, on Medicare without supplemental coverage or had lower-quality coverage. “Care and outcomes for the uninsured, Medicaid and junk policies would likely demonstrate quite substantial differences reflecting limited access to care, poor quality and poor outcomes,” he said.

Dr. Dan Le of the BC Cancer Agency and a co-author of the study said it provides evidence that similar outcomes are possible despite differences in health care costs. However, he noted that the study was limited to a single condition and very specific populations. “One should be cautious,” he said, “in extrapolating the results of this study for all cancer care in Canada and the United States.”

This research was conducted with institutional support for the investigators; no additional funding was obtained.

This article was originally published on the Fred Hutch website on June 1, 2018.

Sabin Russell is a staff writer at Fred Hutchinson Cancer Research Center. For two decades he covered medical science, global health and health care economics for the San Francisco Chronicle, and wrote extensively about infectious diseases, including HIV/AIDS. He was a Knight Science Journalism Fellow at MIT, and a freelance writer for the New York Times and Health Affairs. Reach him at srussell@fredhutch.org.