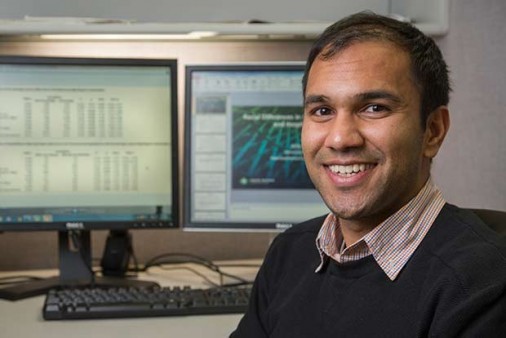 Fred Hutch and University of Washington fellow Kedar Kirtane, MD, led a study of racial minorities with blood cancer and how they may have different end-of-life experiences than do white patients. Robert Hood/Fred Hutch News Service

Ethnic and racial minorities with leukemia or lymphoma are more likely to die in hospital and receive aggressive care in last weeks of life.

When it comes to cancer, racial minorities face higher barriers to care than do white patients. Now, research shows that those health disparities might extend even to where and how patients die.

A new study of nearly 9,500 blood cancer patients who were treated at a UW Medicine hospital and later died revealed that racial and ethnic minority patients have a different experience at the end of their lives than do their white counterparts.

The study found that these patients were more likely to receive aggressive care in the last 30 days of life and to die in the hospital than non-Hispanic white patients. They were also less likely to have documents on file detailing their end-of-life wishes.

These findings are disturbing but not necessarily surprising to those in the health disparities research field, said Kedar Kirtane, MD, a blood cancer researcher at Fred Hutchinson Cancer Research Center and the University of Washington and lead author on the study. Other researchers had made similar observations of health disparities at end-of-life in patients with solid tumors, but for hematologic malignancies, which include leukemias and lymphomas, there’s less research on how minority patients with these diseases die.

“Slowly over the last couple years, there’s been more of a recognition of trying to figure out if those disparities exist [for patients with blood cancer] and subsequently to figure out what to do about them,” said Kirtane, who is a fellow in the UW/Fred Hutch Hematology-Oncology Fellowship Program.

He will present the study’s results today at the American Society of Hematology’s annual meeting in Atlanta.

A first step to understanding disparities

The findings are preliminary, in part because they rely on data from an administrative database of hospital patients’ electronic health records rather than a data set specifically designed for research purposes. The database, which was spearheaded by UW palliative care researcher Ruth Engelberg, PhD, was established for the express purpose of measuring quality of palliative care for patients in the UW Medicine system and, ultimately, improving that care where needed.

Also, because the study looked back at the records of patients who died between 2010 and 2015, the findings aren’t as definitive as if the scientists had tracked patients over time specifically to answer this particular research question—whether a blood cancer patient’s race influences how they die.

In other words, their research points to the need for larger, in-depth studies to make sure the hints of disparities they’ve seen are truly present in this population of blood cancer patients.

Similarly, the study couldn’t identify what is causing the disparities. But if the differences hold up in larger studies, it will be important to understand their root causes and how to address them, the researchers said.

“That’s what the next work needs to look at, the etiology of these differences,” said Fred Hutch and UW clinical researcher Stephanie, MD, one of the study authors.

The roots of the disparities

Of the study’s findings, the fact that racial minorities were less likely to have documentation in place describing their wishes for end-of-life care—also known as “advance directives”—could underlie the other disparities such as being more likely to receive aggressive treatments. If patients’ wishes aren’t getting into their medical records, or aren’t even being expressed in the first place, that could lead to emergency and potentially unnecessary treatments that the patients never wanted, Kirtane said.

But it’s also possible that patients who received more aggressive care were receiving the treatments they wanted, said Lee, who is also a transplant physician at Seattle Cancer Care Alliance. The study couldn’t address that question—the information wasn’t captured in patients’ medical records.

Additionally, it’s much harder for doctors to predict whether a patient with blood cancer will die than it is for a patient with a solid tumor cancer such as breast or lung cancer, Lee said. It’s possible that many of the patients in the study, no matter their race, simply didn’t know their cancers were terminal—and their doctors might not have known either.

There have been hints from previous studies, however, that racial minority patients aren’t using end-of-life or palliative care services as much as non-Hispanic white patients. It’s not always clear whether their care providers are less likely to offer these services to minority patients or if the patients are turning down the services, Kirtane said.

But if it turns out that the services aren’t being offered as frequently, and if that holds true among blood cancer patients as well, that’s a problem, Lee said.

“For anyone with a critical illness, having these conversations early and sensitively, over time, is important,” she said.

Such conversations about prognosis, death and the patients’ wishes should happen in the oncologist’s office, not the hospital in an emergency situation, Kirtane said. He believes that if the disparities hold true in a larger study, any changes to address those disparities may need to start in the clinic, and much earlier than the last month of the patients’ lives.

“As physicians, we always want to respect people’s preferences, especially at the end of life,” he said. “Those discussions should primarily be held in the outpatient setting. The worst thing is if someone is admitted to the hospital and then you’re having this discussion about what you want to do at the end of life when you might be there already.”

The National Institutes of Health and the Cambia Health Foundation funded this study.

This article was originally published on December 11, 2017, by Hutch News. It is republished with permission.