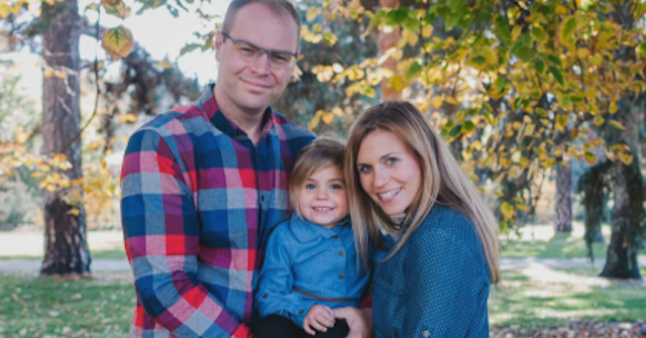 Hope for a Cure

“I wanted to do something meaningful,” said Emily Daniels after her ALK-positive lung cancer diagnosis in 2018.

At 32 years old and 33 weeks pregnant, Emily Daniels lived the kind of life that many of us strive to achieve. With a baby boy on the way, a loving husband, a healthy and happy 3-year-old daughter, family and friends close by, a good job, and an active social life, there was much to be grateful for. By all accounts, her day-to-day was perfectly normal and just the right amount of hectic.

Last February, as Emily was about to depart for a business trip, she began experiencing chest pains. “It just felt tight and hard to take a deep breath,” she said.

She called her doctor, who quickly advised her to head to the nearest emergency department, concerned that the chest pain signaled a blood clot. At the hospital, she received a CT scan and the physician discovered a mass on her lung. The diagnosis was lung cancer — a shock for Emily, who never smoked. A new scan revealed that the cancer was also in her bones and lymph nodes.

“There’s nothing we could point to. Nothing we can say is the reason,” said Emily, who delivered her baby boy, Brady, at 35 weeks.

In search of answers, Emily made her way to one of the world’s most renowned lung cancer oncologists, Ross Camidge, MD, PhD, at the University of Colorado Cancer Center. Camidge is Joyce Zeff Chair in Lung Cancer Research and director of thoracic oncology at the CU School of Medicine. He oversees the Lung Cancer Colorado Fund and in 2012 was recognized as the Bonnie J. Addario Lectureship, and a “luminary in the quest to eradicate lung cancer.” He also earned a place on the 2017 list of Highly Cited Researchers for his work in lung cancer.

Despite the difficult news, Emily and her husband, Brian, would not let a cancer diagnosis keep them from living happy, fulfilled lives. “It took a couple weeks to look at each other and say, ‘You know, we’re not going to sit here and feel sorry for ourselves and keep asking why,’” said Brian.

“I wanted to do something meaningful,” said Emily. “I want to make a difference.” Today, the Daniels are doing just that, by raising awareness for lung cancer and raising money to support vital research that is transforming the way the disease is treated. Research is ongoing, and new advancements are made every day. In fact, the FDA approved Emily’s treatment only six months before she was diagnosed. Emily’s lung cancer has a genetic mutation known as ALK, which made her eligible for the cutting-edge, targeted treatment that has been changing the way we think about the disease. Lung cancer patients are now living longer, and with minimal side effects, thanks to these newly available drugs.

Emily is on a targeted therapy of six pills a day, and remains hopeful about the promise that the latest research and novel treatments may hold for improving lives, including her own.

“I believe that we’re going to see a cure in my lifetime,” said Emily. “I believe that I’ll be here to watch my kids reach milestones, and I’ll get to babysit their kids someday.”

Emily encourages others to join her journey by giving to the Lung Cancer Colorado Fund, supporting the combined research efforts of the CU Cancer Center and UCHealth University of Colorado Hospital. The Daniels’ also held a fundraiser and golf tournament called Links for Lungs in September, the first of what they plan to become an annual event. The fundraiser helps advance lung cancer research aimed at ridding the world of this deadly disease.