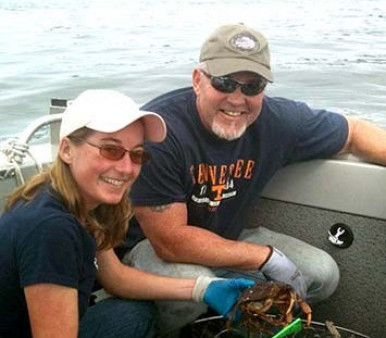 His Immune System Eradicated His Melanoma

Could other patients’ bodies be taught to do the same thing?

Chris Pope blends easily into the lunchtime crowd, just another person enjoying a sandwich while a cold Northwest drizzle spatters the brewpub windows. His firm handshake and direct demeanor hint at his work as a salesman and a neat gray goatee frames his easy smile.

You’d never guess that in his blood are hiding certain immune cells that have launched the development of a new high-tech strategy for treating cancer.

Just 30 miles south of the waterside spot where Pope and his wife were eating, scientists in a lab at Fred Hutchinson Cancer Research Center were growing immune cells reprogrammed with weaponry borrowed from his.

Would it be possible, those scientists wondered, to genetically engineer the immune systems of other patients to act like Pope’s did when it eradicated his stage 4 melanoma?

From a ‘birthmark’ to a cancer diagnosis

Pope’s ordeal started with, of all things, some routine deck maintenance.

A mark on the edge of his left foot he’d assumed for years was a birthmark started bleeding as he was working. He figured it was nothing, but to be on the safe side, he decided to get it checked out.

He got the call as he was driving down from his home north of Seattle to California to meet his newborn granddaughter in July 2012. He pulled over to talk to the doctor.

The news that he had cancer, and that it was serious, was so hard for him to process that he didn’t tell his daughter during his visit to meet her new baby girl.

“You can’t wrap your mind around the enormity of it,” he said.

Pope’s doctors found that his cancer had already begun to spread, so they removed the lymph nodes near his tumor in an attempt to block off its escape routes. He enrolled in a trial of a then-experimental drug (now approved and marketed as Yervoy) designed to amp up his natural anti-cancer immune response. It seemed to work for a few months, but then his doctors spotted the cancer sneaking up his leg. Those spots were removed, but three months later, more cancer was found. Surgery again. Then another clinical trial in which his affected leg would be barricaded off with a tourniquet and pumped full of high-dose chemo.

But the pre-trial scans found that the cancer had reached his pelvis. It had escaped all his doctors’ attempts at keeping it contained.

An immunotherapy clinical trial offers a next step

Pope dealt with melanoma like the long training runs he endured as a new recruit to the Navy, decades ago.

He was never a fast runner. But he was always one of the few who made it all the way to the finish line, he recalls, because his focus was just on one simple thing: putting one foot in front of another. So he applied the same ethic now.

“You just keep on going,” the combat veteran said.

The next step in Pope’s endurance run was a clinical trial led by Fred Hutch’s Sylvia Lee, MD.

An oncologist, Lee treats patients with melanoma and certain other cancers. And as a faculty member at Fred Hutch, Lee is leading the development of a still-experimental therapy aimed at amplifying patients’ existing immune responses to their cancers.

In tumor-infiltrating lymphocyte (or TIL) therapy, the medical team takes out a patient’s tumor, finds the T cells that have managed to find their way into the cancer naturally, and multiplies them billions of times over in the lab. The T cells with the most anti-tumor potential are selected and returned to the patient’s bloodstream with the hope that they will attack the cancer en masse.

Surgeons removed cancer-filled lymph nodes from Pope’s groin in November 2014, and the T cells inside were shipped off to the lab. After a week of preparative chemo, he got his multiplied T cells back, followed by what was by far the most difficult part for him: a regimen of an immune-stimulating drug in an intensive-care unit that caused terrible body-wide side effects as it helped rev up his newly amped-up T cells.

Then, as he recovered from everything he’d been through, Pope, his wife and his doctors waited.

Until his third scan, months later, when his cancer had disappeared completely.

Of nine participants in Lee’s TIL clinical trial, Pope and another patient have seen their advanced melanomas disappear completely afterward, a rate that’s comparable to other institutions’ experiences with the strategy, Lee said. And data is beginning to emerge that Pope’s long-lasting outcome may be closer to the norm than the exception for patients like him whose melanomas do initially respond to TIL, she added.

“My hope,” Lee said, “is that his melanoma won’t come back for the rest of his life.”

‘The high-end hope’: A new T-cell therapy for melanoma?

In a crowded research lab two floors below Lee’s Fred Hutch office, Joshua Veatch, MD, PhD, and his mentor Stanley Riddell, MD are working on strategies to genetically reprogram cancer patients’ immune cells to do something like what Pope’s did. And that’s why when they learned about the results of Lee’s clinical trial of TIL, they decided to take a closer look.

“The best case scenario in studying his case is that we find what helped him do so well and bottle it up to use to help other people,” Veatch said. Scientific research rarely works out so neatly, Veatch explained, but this project is going differently.

“In this case, we think it is possible we did find something in him that could help other people,” he said.

Because it is often caused by DNA-damaging UV light, melanoma is one of the most highly mutated cancers, with an average of 100-200 gene mutations in each patient’s tumor. But Pope’s was unusual: Veatch could only find 20 mutations in Pope’s cancer cells.

To the immune system, which is constantly patrolling the body for invaders, highly mutated cells tend to stick out and invite attack. So why was Pope’s immune system so good at getting rid of his cancer?

Veatch and his colleagues published the results of their in-depth study of Pope’s cells earlier this year in the Journal of Clinical Investigation.

While Pope’s cancer was not highly mutated, the researchers reported, it did have one overwhelmingly powerful mutation: A so-called “driver mutation,” this was a change in a gene called BRAF that is a main player in cellular control systems. In healthy cells, BRAF encodes instructions that help make sure the cells grow, mature, move and die at the proper times. A change in just the wrong spot of this gene in Pope’s skin cells, essentially, broke his BRAF. The controls didn’t work as they should, and Pope’s cells became cancerous.

About half of melanoma patients have a driver mutation in BRAF. So that wasn’t surprising. The surprise was that Pope’s immune system actually noticed. Moreover, the type of immune cell that was seeing Pope’s mutated BRAF was not the type of cell actually doing most of the direct cancer-killing, the scientists found. It was a type called helper T cells, whose roles are mostly supportive.

Only now, Veatch explained, are scientists beginning to realize that helper T cells, too, have an essential role to play in eradicating cancer.

“It’s really a big, open question now, whether they [helper T cells] are doing anything important and whether we can harness that” to treat cancer, Veatch said.

The diverse immune army responding to Pope’s cancer included helper T cells as well as an array of killer T cells, Veatch found. Interestingly, Pope’s killer T cells were recognizing many different aspects of his cancer cells, but not the mutated BRAF. Some of Pope’s killer T cells, for example, seem to be attracted to cells in his body that carry lots of pigment, which is a hallmark of melanoma — but also of freckles. That’s obvious because Pope’s freckles, which once dotted his shoulders like a galaxy of brown suns, have gone the way of his cancer. (The change is harmless, Lee explained.)

While driver mutations in BRAF and a few other genes are fairly common in many cancer types, not all of these patients have a strong immune response to them. Veatch and colleagues want to change that.

In early June, Veatch presented a research poster at the annual meeting of the American Society of Clinical Oncology showing that, in fact, the secret sauce in Pope’s immune system can be bottled and given to other helper T cells, at least in test tubes. Veatch is now hopeful that he and his colleagues can bring what they’ve learned from Pope’s cells to other patients in a clinical trial in a few years. Their vision is to genetically engineer the power to recognize mutated BRAF into the helper T cells of patients whose cancers have this mutation but whose immune systems can’t see it. Because of the complexities of how T cells recognize their targets, a single new T-cell therapy would only work for people with a particular HLA (tissue) type. But it would be a start, Veatch said.

“The high-end hope is that giving T cells that are exactly HLA-matched to people whose tumor has this mutation, that this will help them. But also that it will create a new paradigm for using [helper T] cells like these to target cancer, which might be applicable to more people,” Veatch said.

Pope feels grateful and fortunate, he said, that his case turned out the way it did, and that his cells might hold a power that could be used to help others.

“It’s nothing you do. It’s just luck. You don’t prepare for it; it’s not a test or anything like that,” he said.

He still has periodic check-ups with Lee, and the scientist continues to develop TIL therapy, the strategy that seems to have helped him so much. She’s hopeful that the groundwork will soon be lain for TIL therapy to become more widely available, and that the good long-term results she and colleagues have seen so far in some patients continue to bear out.

As Pope continues to show no signs of his cancer returning, those check-ups are becoming less frequent. Today he deals with some long-lasting effects of his ordeal, like fatigue, but has been able to get back to the things he loves: time with family, sports, summer days outside, walks with the dogs.

“We’re just enjoying life,” he said. “You take it as it comes to you. We just hope to stay on this path.”

This article was originally published on June 19, 2018, by Hutch News. It is republished with permission.