A medication that helps the immune system fight cancer worked well for a subset of women with the most difficult type of breast cancer to treat, but results were better when treatment was started early, according to findings reported at the American Society of Clinical Oncology (ASCO) annual meeting this week in Chicago.

The checkpoint inhibitor Keytruda (pembrolizumab) shrunk tumors in 5 percent of patients with metastatic triple-negative breast cancer who had received extensive prior treatment. But the response rate rose to 23 percent for women being treated for the first time.

Triple-negative breast cancer is an aggressive form of the disease that accounts for about 15 percent of all breast cancers. It occurs more often in younger women, especially young Black women.

Triple-negative tumors do not express hormone receptors or another receptor called HER2, so therapies that target these receptors do not work. The only standard treatment is chemotherapy, which often causes side effects such as nausea and hair loss, and survival is generally poor.

Keytruda is a new type of drug known as a checkpoint inhibitor. It is currently approved for treatment of several types of cancer, including advanced lung cancer and advanced melanoma.

Keytruda is a monoclonal antibody that blocks the PD-1 receptor (a checkpoint) on T-cells the main soldiers of the immune system. PD1 plays a role in regulating immune function. Some tumors can hijack PD-1 to turn off immune responses against them. Drugs that block PD-1 can restore T-cell activity against cancerous cells. But checkpoint inhibitors work only against a small subset of tumors, and it is not easy to predict who will benefit.

Sylvia Adams, MD, from the Perlmutter Cancer Center at New York University Langone Medical Center, presented findings from KEYNOTE-086, a multinational Phase II clinical trial of Keytruda for women with advanced metastatic (spread beyond the breast) triple-negative breast cancer. These are the first data to be reported from a study of immunotherapy for this most challenging form of the disease.

Before starting treatment, tumor biopsies were tested for PD-L1, the ligand, or binding partner, that attaches to the PD-1 receptor. People with tumors that test positive for PD-L1 are somewhat more likely to respond to checkpoint inhibitors. However, not everyone who tests positive will respond, and some people who test negative will respond anyway.

Study participants were divided into two cohorts. Cohort A included 170 women who had received at least one prior systemic treatment for breast cancer, half of whom had tried three or more. About 60 percent had PD-L1-positive tumors. Cohort B included 52 previously untreated patients, all of whom had PD-L1-positive tumors. More than 80 percent in Cohort A and about 70 percent in Cohort B were postmenopausal. 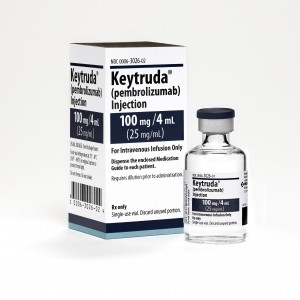 All participants were treated with IV infusions of 200 mg of Keytruda every three weeks for up to two years or until they experienced disease progression or intolerable side effects. There was no placebo or control arm.

In Cohort A, 5 percent of the women saw their tumors shrink; one had a complete response, and seven had partial responses. An additional 21 percent maintained stable disease, but 61 percent experienced disease progression. The median duration of response was six months. There were no significant differences based on PD-L1 status.

The median overall survival was nine months, and the median progression-free survival was two months. However, among women who either responded or had stable disease, the median survival was not reached because most of the women were still alive. In fact, no women with complete or partial responses died during follow-up.

The previously untreated women in Cohort B had better outcomes. Here, the overall response rate was 23 percent, with two complete responses and 10 partial responses. Seventeen percent had stable disease, and 58 percent had disease progression. The median duration of response was about eight months.

“The data suggest that immunotherapy administered earlier in the disease course is more beneficial, as response rates are much greater in first- compared to second- or later lines of therapy,” Adams said.

The major concern with checkpoint inhibitors is immune-mediated side effects. These drugs work by restoring immune response against cancer cells, but they can potentially also take the brakes off the immune system in general, leading to excessive immune activation and inflammation. In this study, just 1 percent of women in Cohort A, and none in Cohort B, developed severe immune-mediated symptoms. The most common immune-related side effect was thyroid problems.

“Our results suggest that this treatment as a single agent is effective for metastatic triple-negative breast cancer,” Adams said. “These data are very encouraging, especially for a disease that is extremely aggressive and has limited treatment options when it metastasizes. Although only a small subset of women responded to the drug, within that subset, pembrolizumab worked extremely well and responses were durable.”

Larger randomized trials of Keytruda for breast cancer and other types of cancer are under way. The major challenge with checkpoint inhibitors is that only a small proportion of patients respond, and researchers are studying various types of combination therapy in an effort to make more tumors susceptible to treatment.