Jon Batiste, who took home four Grammys this week for his album We Are and his work on the soundtrack for the hit Pixar movie Soul, revealed this week that he and his partner, Suleika Jaouad, had secretly married.

The best-selling author of Between Two Kingdoms: A Memoir of a Life Interrupted, Jaouad was diagnosed with acute myeloid leukemia in 2011 at age 22, underwent several rounds of chemotherapy, enrolled in a clinical trial and received a bone marrow transplant before finally being declared cancer-free in 2014. Last November, however, days before the Grammy nominations were announced, Jaouad, now 33, learned her cancer had returned more aggressively. 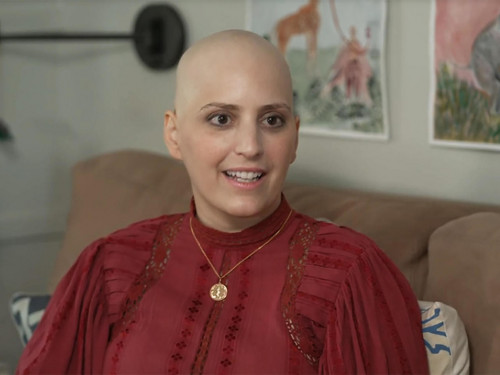 “We’re having to hold these two realities,” Batiste, 35, said in an interview with CBS.

Holding space for the joy of being recognized for the work he put into his album and the film Soul while his partner of eight years suffered alone in a hospital, isolated due to the COVID-19 pandemic, was difficult for Batiste.

“This happened, but this isn’t gonna interrupt the plan that we have,” Batiste told CBS.

They secretly tied the knot in February, the night before Jaouad’s second bone marrow transplant, at an intimate ceremony where they used bread ties as wedding bands. Getting married, Batiste said, was “an act of defiance. The darkness will try to overtake you, but just turn on the light, focus on the light, hold on to the light.”

Both Jaouad and Batiste use art to express themselves in ways words cannot. Jaouad journals and paints self-portraits depicting her treatment. She even bedazzled the walker she now must use to add lightness and whimsy to her days.

With omicron still surging in February, Batiste couldn’t be with Jaouad after her bone marrow transplant.

“Utter isolation,” she described. “And I expressed something to that effect to Jon. And next thing I know, I see him hunched over his computer. And half an hour later, he starts playing this lullaby. And every single day after that, he wrote me a new lullaby. And it felt like he was right there sleeping by my bedside.”

Batiste wanted to fill her hospital room with love and healing vibes.

“For me, that’s my way. Everybody will have their way, you know, but seek that. Meditate on that. Focus on those things. Find those things,” he said.

Best known as the bandleader on The Late Show with Stephen Colbert, Batiste won Grammys this year for Best Music Video, Best American Roots Performance, Best Score Soundtrack for Visual Media and the prestigious Album of the Year.

With the Grammys behind him, Batiste will debut his American Symphony next month at Carnegie Hall. The work addresses the tension between America’s ideals and its realities, between light and darkness, a theme that seems to echo the reality he and Jaouad face in their lives now.