Kelly Tough: How One NFL Hall of Famer Faced Cancer

Jim Kelly, who led the Buffalo Bills for 11 years, needed a different kind of toughness to battle cancer of the jaw.

Eight years ago, Jim Kelly, the Hall of Fame quarterback who led the Buffalo Bills to the playoffs eight times in his 11 seasons with the team in the 1980s and ’90s, was experiencing serious jaw pain. Despite undergoing multiple root canals in an effort to treat it, the pain just wouldn’t go away. Finally, in 2013, a doctor recommended a biopsy. It came back negative, but the pain continued, so he sought a second opinion.

This time, the results were, unfortunately, conclusive: squamous cell carcinoma in his upper jaw.

“I had never heard of it,” says Kelly, now 59. “When I left the doctor, I drove a little ways down the road, and I pulled off to the side, and I just started crying. I wasn’t crying because of the cancer. I was crying because how was I going to tell my wife and my two daughters?”

Kelly and his family had already been through so much—his NFL career and the physical injuries that came with it; the loss of his son, Hunter, to Krabbe disease, a genetic disorder affecting the nervous system, at just 8 years old—that he didn’t want to add to their suffering. But after his wife, Jill, and daughters Erin and Camryn shed their own tears, “Their sorrow became an attitude that we’re going to beat this; we’re going to fight through it. We fought with Hunter, and we’re going do the same with you,” he says.

This attitude is part of what Kelly calls “Kelly Tough,” a motto he says he adopted because “you’ve got to be tough to go through all this.”

As events unfolded, he would need to call on that toughness more than once.

Now, however, Kelly was about to face a different challenge—one he was not even favored to win. His first treatment was surgery in June 2013 to remove the cancer, along with part of his upper jaw, followed by jaw reconstruction. The surgery appeared successful, and life went on.

But when the cancer recurred in March 2014, the Kellys again had to draw on their reserves of toughness. “They told me that I needed to get radiation, I needed to do chemotherapy and I needed to do it now,” Kelly says. He describes experiencing “horrible” claustrophobia during his 36 radiation treatments. His medical care team told his brother Danny that “I had a less than 10% chance of living,” he says. “And pretty much everybody thought that was the end of Jim Kelly.”

“My family walked into my room with a smile…always upbeat, always with a positive attitude,” he recalls. Kelly’s five brothers would visit and bring “that attitude of toughness” to his bedside, encouraging him to get up and go for daily walks whether he felt like it or not.

Meanwhile, Danny managed “all the logistics behind the scenes,” while Jill kept a journal of his treatments and side effects. Kelly and daughter Erin would do push-ups on the railings in hospital hallways. Being Kelly Tough, whether physically, emotionally or mentally, kept his spirits up when he felt low.

In September 2014, after finishing his grueling treatment regimen, several biopsies came back negative. Kelly became involved with Merck’s “Your Cancer Game Plan” campaign, which he says was “a no-brainer. I’m a quarterback—you live by a game plan your whole career.”

After his initial diagnosis left him and his family with many more questions than answers, creating a game plan to tackle cancer made perfect sense. “How to eat, who to talk to, what to talk about, who should you ask these questions…all the questions we couldn’t find answers to” are included in the plan, he says. Guides like these can break down an overwhelming issue into smaller, manageable parts and help empower newly diagnosed people to take control of their medical care.

Kelly had a second recurrence of his squamous cell carcinoma in 2018, again undergoing surgery to remove it and another reconstructive surgery afterward. But once more, Kelly Tough kept him and his family steady throughout the process. Today, he undergoes regular scans that have so far shown no evidence of disease. 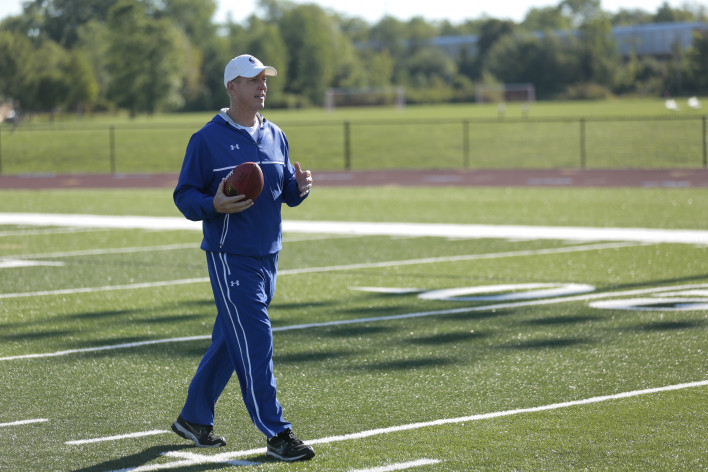 Posttreatment, Kelly’s speaking engagement schedule is packed: He gives 25 to 35 speeches each year to medical and business professionals. He talks about his Four Fs, which he explains stand for “First, my faith in the good Lord, that He has plans for me to be able to make a difference for others. Second is my family; they’ve been behind me from start to finish. Third is my friends, who have been there and unbelievable. And fourth is the fans, the fans out there who have sent me cards, letters and just so many great messages to keep fighting.”

And while having a league’s worth of supporters out there helps, Kelly attributes his ability to persevere to his family’s love—both the tough and gentle types.

Being Kelly Tough, he says, also requires having a positive mental attitude and living by the adage “Make a difference today for someone fighting for their tomorrow.” Just as his family’s and friends’ constant support during his treatments buoyed his spirits during some of the hardest times in his life, so too can anyone support the person in their life undergoing cancer treatment. “My family would change my attitude,” Kelly says. “You take it day by day, but the thing is, it’s all about your attitude.”

To others experiencing difficult treatment, he says, “We never know what tomorrow holds. Just keep fighting, keep making a difference.”

Head and neck cancer can cause a variety of symptoms depending on where it occurs and how advanced it is. Treatment likewise varies based on the cancer’s location and other factors. It may include surgery, radiation, chemotherapy, targeted therapies that work against cancer with specific characteristics or immunotherapy that helps the immune system fight cancer.