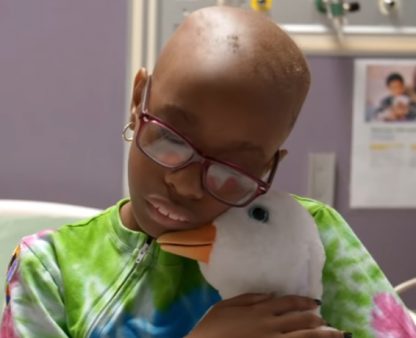 For Kids With Cancer, a Quacking Robot Is Soothing

The Washington Post reports that kids with cancer across the country are receiving support from an unexpected source—a robotic duck. Rachid Abdallah, the father of 4-year-old leukemia patient Savi, credits the toy with giving his son, who is too young to express his feelings, a conduit for his emotions. Savi received the duck from the Children’s National Health System in Washington, DC, where he is in the last phase of his three-year chemotherapy plan.

“I’ll say, ‘How are you feeling outside?’ and he’ll pick the emoji that is silly,” Abdallah explained to Washington Post reporter Peter Holley, referring to the emoji discs that, when placed against the duck’s chest, activate the toy’s expression of emotions. “And then I’ll say, ‘How are you feeling inside?’ and when he’s feeling horrible, he’ll pick up the emoji that shows he’s feeling really bad.”

The duck is the product of a partnership between insurance company Aflac (whose mascot is, famously, a duck) and the robotics company Sproutel. Outfitted with sensors that enable it to register and respond to touch, the duck does double duty as a cuddly stuffed animal and a sophisticated technological device. It’s capable of producing sounds and movements, sustaining syringe injections, emitting calming vibrations and mimicking various emotions.

Joe Bauer, a child life specialist at Children’s National tasked with helping young cancer patients cope with the side effects of their treatment, said that in recent months, the duck has become his go-to tool. He cites the toy’s broad appeal. “If there’s a 10-year-old, I can focus on the technology and the cool things the duck can do, but if I’m giving it to a 4-year-old, it’s more like, ‘This is your friend, this is your buddy who is here with you,’” he said. “It’s always therapeutic. It can be therapeutic to educate a child or it can just be therapeutic for them to play with a duck and not even talk about the medical aspect of things.”

Looking for more resources for pediatric cancer? Read “This Children’s Book Shows How to Help Anyone With Cancer,” which spotlights author Vanessa Bayer’s How Do You Care for a Very Sick Bear?