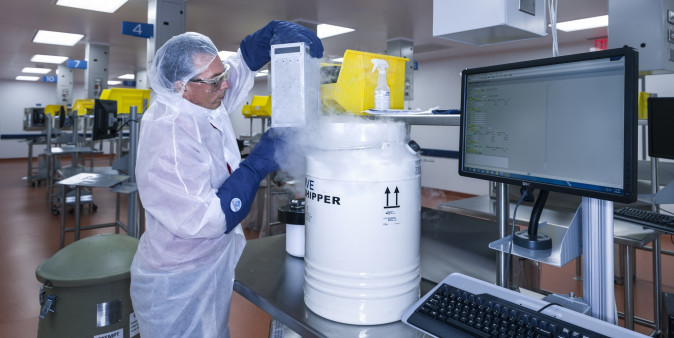 A patient’s T cells arrive at the Novartis manufacturing facility in Morris Plains, where they will be re-engineered to recognize and fight cancer and healthy cells expressing a specific antigen in the patient’s body. Courtesy of Novartis

About 80 percent of responders remained relapse-free a year after receiving tisagenlecleucel.

About a third of people with relapsed or refractory (nonresponsive) non-Hodgkin lymphoma remained in remission a year after responding to the recently approved CAR-T therapy Kymriah (tisagenlecleucel), according to a report at the 23rd Annual Congress of the European Hematology Association, held last week in Stockholm.

After 14 months of follow-up in the Phase II JULIET trial, the median duration of response was not reached because a majority of participants were still doing well.

Chimeric antigen receptor T-cell therapy—better known as CAR-T—involves removing a sample of a patient’s white blood cells, genetically reprogramming the T cells to recognize and attack cancer cells, multiplying them in a lab and infusing them back into the body. Using an inactivated virus, scientists insert receptors that target the CD19 protein on B cells that grow out of control in lymphoma and leukemia, creating a customized “living drug” for each individual.

Novartis’s Kymriah was first approved in August 2017 for children and young adults with relapsed or refractory acute lymphoblastic leukemia. In May, the Food and Drug Administration approved a new indication for adults with diffuse large B-cell lymphoma (DLBCL) that does not respond or comes back after other types of treatment. Last October, the agency approved another CAR-T therapy for DLBCL, Yescarta (axicabtagene ciloleucel) from Kite Pharma, a Gilead company.

Diffuse large B-cell lymphoma is the most common type of non-Hodgkin lymphoma (NHL). Nearly 74,700 people in the United States will be diagnosed with NHL this year, and about a third of those will have DLBCL, according to the American Cancer Society. Using standard therapy, the median survival for people with relapsed or refractory DLBCL is around six months.

The JULIET study enrolled 165 adults with DLBCL in 10 countries. The median age was 56 and about three quarters had advanced (Stage III or IV) disease at study entry. They experienced disease progression after receiving at least two types of prior chemotherapy and were either ineligible for or relapsed after autologous (self-donated) stem cell transplants.

A total of 111 participants received Kymriah, which involves a single infusion of engineered T cells. Some could not be treated because their cancer progressed too rapidly or modified T cells could not be successfully manufactured.

Primary results from JULIET were presented at the American Society of Hematology annual meeting last December, showing that the overall response rate (meaning complete or partial remission) at three months was 53 percent. At six months, about a third of treated participants had complete responses, meaning they had no remaining evidence of cancer.

At last week’s meeting, Peter Borchmann, MD, of University Hospital of Cologne in Germany, presented updated results after a median follow-up period of 14 months. In this extended analysis, the overall response rate was 52 percent, including 40 percent with complete responses.

A year after the onset of response, 65 percent of participants had not yet relapsed. Among those who responded at three months, 83 percent remained in remission at 12 months; 13 of 24 prior partial responders (54 percent) went on to achieve complete response.

CAR-T therapy can potentially cause severe side effects. Unleashing genetically modified T cells not only can kill cancer cells but also can lead to an excessive immune response that harms healthy organs and tissue. This cytokine release syndrome (CRS) can cause symptoms ranging from fever and flu-like symptoms to neurological problems and organ failure. In addition, Kymriah attacks normal antibody-producing B cells along with abnormal lymphoma B cells, so patients are at increased risk for infections.

In this analysis, 22 percent of JULIET participants experienced severe CRS, 12 percent had severe neurological side effects and 20 percent developed severe infections. No deaths were attributed to the treatment, and no new safety concerns emerged during the eight additional months of follow-up. A number of patients received Actemra (tocilizumab) to manage immune-mediated side effects.

“Advanced aggressive lymphoma patients who once faced a poor prognosis now have the possibility of sustained remission after a single course of therapy—a previously unimaginable and revolutionary breakthrough,” Borchmann said in a Novartis press release. “With 14 months of data from JULIET, we are seeing that Kymriah may continue to redefine outcomes for patients with relapsed or refractory DLBCL.”

Click here for an overview of CAR-T therapy in the Winter 2018 issue of Cancer Health.