We think of lobular breast cancer and ductal breast cancer as the same, and treat them interchangeably, but there are key differences between the two subtypes Istock (Model(s) used for illustrative purposes only)

The first time Leigh Pate heard the term was when she got a phone call from her doctor following a series of diagnostic tests. The mammogram had been clean—like so many before it—but the ultrasound and biopsy told another story.

“After I hung up, I went to my computer and typed in ‘globular breast cancer,’” said Pate, a 51-year-old public policy consultant from Seattle of her diagnosis seven years ago. “Google had to correct me.”

Pate went through two surgeries, five months of chemotherapy, 33 courses of radiation and four years of tamoxifen, a daily pill that cuts off the fuel source for this very estrogen receptor–positive (ER+) disease. By the end of her treatment and recovery, she not only knew what lobular breast cancer was, she was determined to shine a spotlight on this idiosyncratic subtype.

“I started asking about lobular and realized they don’t know enough,” she said. “It’s lumped together and treated just like regular ER+ breast cancer. But lobular presents differently, it behaves differently and it has different subtypes and variants.”

Patients like Pate aren’t the only ones pushing for more lobular research.

“If you were to put lobular cancer into the top cancers in women, subset it out by itself, it would be number six,” said Nancy Davidson, MD, senior vice president and director of the Clinical Research Division and Endowed Chair for Breast Cancer Research at Fred Hutchinson Cancer Research Center as well as co-chair of the 2016 symposium. “It’s pretty common.”

President and executive director of Seattle Cancer Care Alliance and head of medical oncology at the University of Washington, Davidson was the powerhouse who built University of Pittsburgh’s strong lobular research program before joining Fred Hutch.

“Although superficially we think of lobular and ductal as the same, and treat them interchangeably, they might have biological differences that would have clinical differences,” she said.

Lobular, it would seem, is finally having its day.

Invasive (or infiltrating) lobular carcinoma, ILC for short, accounts for 10 to 15 percent of invasive breast cancers; invasive ductal carcinoma or IDC accounts for most of the rest. Because most IDCs and ILCs are ER+, the two subtypes have been treated identically for decades with surgery, chemo and radiation as needed, and years of endocrine therapy: tamoxifen for pre-menopausal women and an aromatase inhibitor, or AI, for post.

But there are key differences when it comes to how the two cancers present and spread; ditto for their biological bits. 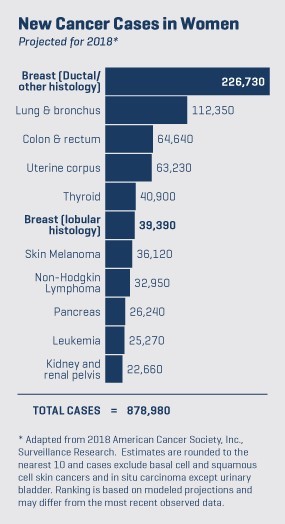 “We’ve known for a long time that lobular acts differently; lobular tumors are bigger and more spread out; they metastasize differently and are somewhat more likely to be bilateral,” said Fred Hutch pathologist Peggy Porter, MD, who has been involved in a number of ILC research collaborations. “It’s a pattern that’s been histologically defined and clinically defined for years.”

Lobular’s defining histological feature is its lack of a cell-to-cell adhesion protein known as E-cadherin, or CDH1. Instead of clustering together, lobular cells spread out single file like tree branches or spider webs or mesh, which explains why surgeons and oncologists often refer to it as “sneaky” or “insidious.” Because the cells don’t stick together well, there’s often no lump, making it harder for women to find during self-exams. Instead, they may notice a thickening or a small “tuck” as the skin is tugged from the inside. Lobular also tends to be multifocal, that is, patients often have more than one tumor per breast. 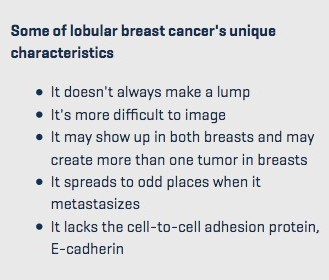 This growth pattern also makes it difficult to find via imaging (if you have dense breasts, this can be a double whammy), so lobular tumors are often discovered at a later stage. Pate, who was diagnosed at stage 2b, said multiple mammograms missed her ILC tumor. Ultimately, it was found with ultrasound due to a neighboring lump created by ductal carcinoma in situ.

“If the DCIS hadn’t been in there and I hadn’t found it on self-exam, I don’t think the lobular would have ever shown up on a standard mammogram,” she said.

Seattle Cancer Care Alliance radiologist Diana Lam, MD, agreed that lobular can be “really hard to find” because it presents with “subtle abnormalities and architectural distortions.” 3D mammography or tomosynthesis, she said, is better at catching the distortion (which she likened to a star pattern) “because we’re able to scroll through multiple images of a breast.”

Fred Hutch clinical researcher and SCCA oncologist Hannah Linden, MD, said lobular is found more often by MRI than by traditional imaging (unfortunately, MRIs may not be covered by insurance), but stressed that “just because imaging isn’t as good, it doesn’t mean it’s useless.”

Lobular’s metastatic spread is also unconventional. While ductal spreads to the liver, lungs, bones and brain, lobular tends to go to the bones and ovaries or enmesh itself in the gastrointestinal tract, the abdominal lining or the tissue around the kidneys and ureters. But lobular survivors aren’t always aware of this oddball spread pattern. Nor is it common knowledge among the primary care physicians who care for them years after treatment. This is especially problematic because lobular leans towards late recurrence.

“Several women in our [ILC] group had mets to the GI tract and the ovaries and never knew it was possible to spread there,” said Pate. “Lobular patients often have terrible problems getting diagnosed because imaging can’t see the mets or their doctors misdiagnose their symptoms. Patients need to understand their disease so that if they’re having persistent issues with their ovaries or abdomen, they can advocate for themselves.”

Fred Hutch has long been associated with lobular research.

In the late 1990s, Hutch epidemiologists began investigating the possibility that lobular breast cancer was on the rise. Then in 2000, Christopher Li, MD, PhD, and colleagues published a study showing that it was—and its rise was somehow linked with menopause. A landmark Women’s Health Initiative study filled in the rest of the puzzle two years later: the rise in lobular breast cancer was directly linked to the use of combined hormone therapy, or CHT, by postmenopausal women.

Unfortunately, the lobular association seemed to get lost in all the brouhaha about CHT increasing the risk of breast cancer.

“People often seem to get this wrong,” said Porter of the 2002 WHI finding. “It’s not that breast cancer in general is increased by hormone replacement therapy. Lobular breast cancer is increased by taking combined estrogen and progestin hormone replacement therapy. Something in that combination is creating a situation where lobular cancer is more likely to develop.”

The discovery turned out to be a mixed blessing for lobular cancer research. On the plus side, it curbed the use of CHT and the rates of lobular cancer fell. On the down side, it triggered a drop in ILC research funding.

“We tried to get funding multiple times [to continue to study lobular],” said Porter. “But everybody said, ‘Oh, we know it’s because of combined hormone therapy and women have stopped taking it so we don’t need to keep studying it. We’ve solved it.’”

Premenopausal breast cancer patients like Pate, who never took combined hormone therapy, feel the lobular code is far from cracked. Researchers, too, believe there’s much more to be done.

While there are challenges to lobular research—it’s a less common cancer so there are fewer sample sizes and cell lines—studies now underway may lead to answers about the cancer’s origins, changes to current treatment and potential therapies.

In September 2015, results from the Breast International Group 1-98 study presented key findings regarding the hormonal treatment of ILC patients: An aromatase inhibitor (in this case, letrozole) worked better for ILC patients than tamoxifen. As a result, a new national study, run through the Translational Breast Cancer Research Consortium and led by U Pitt lobular expert Rachel Jankowitz, MD (Linden is leading it locally), is comparing three endocrine therapies—fulvestrant, tamoxifen and the AI anastrozole—to see which one works best.

“The hypothesis of this trial,” said Davidson, who helped create the TBCRC back in 2005, “is that tamoxifen will be the least effective drug and that the AI and fulvestrant might actually be better drugs in this setting. It may lead us to think more carefully about how we treat these women in the future.”

There is also a body of work looking at potential molecular targets for ILC.

In 2015, The Cancer Genome Atlas published a paper outlining a few more of ILC’s “genetic hallmarks,” aside from the E-cadherin loss. A follow-up study by U Pitt lobular expert Steffi Oesterreich, PhD (and Davidson), identified a signaling molecule that might also serve as a target. Davidson, Oesterreich, Porter and Li are delving further into ILC’s genetic profiles using population data from Fred Hutch’s Cancer Surveillance System, a western Washington cancer registry. Breaking patient data into six comparison groups, they’re studying how the hormone receptors in both ductal and lobular patients’ tumors are influenced by synthetic progestin and estrogen (CHT), by estrogen therapy alone and by no combined hormone therapy whatsoever.

“We’re testing these samples comprehensively for expression differences and associations with hormonal replacement therapies [HRT],” said Porter. “If we look at the gene expression and mutations and relate them to HRT categories, we might start to see differences that could lead to the identification of novel prevention and therapeutic targets.”

Encouraged by lobular’s moment in the sun, Pate and other ILC advocates formed the Lobular Breast Cancer Alliance after the Pittsburgh symposium to advance research and educate patients and others about the disease.

“A group of us stayed in touch after the symposium and put ideas together, and it basically evolved into the LBCA,” she said. “Now we have a steering committee of patient advocates around the country and a scientific advisory board of top lobular researchers, including two at Fred Hutch [Davidson and Li].”

So far, the group has developed a white paper, launched a website, presented a poster at the San Antonio Breast Cancer Symposium, organized a series of educational webinars and established a partnership with the Metastatic Breast Cancer Project—a genomic research initiative out of Dana Farber Cancer Institute and the Broad Institute of MIT and Harvard—to help identify lobular patients and expedite their tumor analysis.

“The sheer lack of tumor material to study is a problem,” said Pate. “We’re trying to bridge that.”

Other goals of the LBCA (the “Lob Mob,” for short): advancing lobular-specific and inclusive clinical trials and studies, linking ILC patients with research opportunities, and working with existing breast cancer organizations to better address the needs of lobular patients, hundreds of whom have shared stories of misleading mammograms and delayed diagnoses on two closed Facebook groups launched by early- and late-stage ILC patients.

Overall, Pate said she’s encouraged by the recent uptick in interest in ILC research and believes that the opportunities for improvement will “make a big difference to patients.”

“They’re starting to understand ILC responds differently to standard treatments and the door is open to find targeted therapies,” she said. “Before, we didn’t have the knowledge to do that.”

She’s also appreciative of the support patients have received from the lobular research community on both sides of the country.

“Steffi [Oesterreich] and Nancy [Davidson] were co-chairs of the first symposium and have been instrumental in elevating ILC within the research community,” she said. “They’ve been tremendous champions for patients.”

This article was originally published on February 15, 2018, by Hutch News. It is republished with permission.

The Evidence Is In: COVID Vaccines Do Protect Patients With Cancer