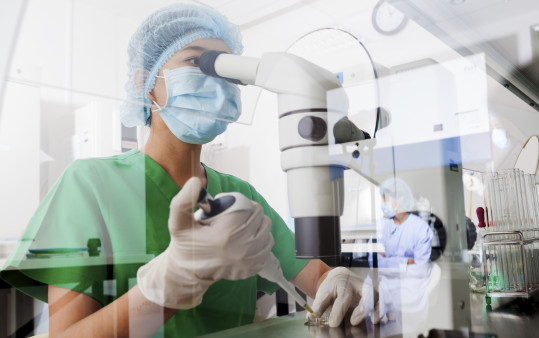 In a paper published on May 7, a team of researchers from the Pacific Northwest used a machine learning algorithm to solve a challenging problem in cancer biology: identifying how an important but mysterious gene mutation contributes to cancer’s growth. The surprising answer has revealed potential new targets for cancer drug development, the team said.

“The bottom line is that we need new ways to analyze the massive amounts of cancer genome data, and this [method] is one that looks like it can lead to exciting and unexpected discoveries, and maybe treatments someday,” said Bruce Clurman, MD, PhD, one of the lead researchers on the work.

The study was published on May 7 in the Proceedings of the National Academy of Sciences of the United States of America.

Clurman, executive vice president and deputy director of Fred Hutchinson Cancer Research Center and holder of the Hutch’s Rosput Reynolds Endowed Chair, described the study and its implications in the following interview, which has been edited for brevity and clarity. Editor’s notes are in italic.

You were looking at a molecule called Fbw7. What’s the problem you were trying to solve?

This is a protein that degrades a lot of other proteins that drive cancer. It’s called a tumor suppressor. One of the problems in studying it is the number of pathways it controls. It’s so complicated that it’s very hard to go through the pathways systematically one by one and try to understand what the biologic consequences of these mutations are in cancer, and even harder to go about therapeutically targeting them.

How does machine learning fit into that?

We know there are a number of cancer targets [molecules that are important for cancer and could be targets for anti-cancer drugs] that are activated when Fbw7 is disrupted in tumors. But we don’t know the roles of individual targets versus this whole network in different types of cancer. Because this network is so complicated we wanted to try and use a machine learning, informatics-based approach to analyze big data sets from real human tumors and see if we could learn something about the impact of this entire pathway on the overall state of the tumor cells.

Our collaborators [led by computational biologist Adam Margolin, PhD] developed this method to study these types of problems, but they hadn’t applied it in this way before. [Margolin is now at the Mount Sinai School of Medicine but conducted this work at the Oregon Health and Science University.]

The team analyzed data sets from the National Institutes of Health’s massive cancer-genome project, known as The Cancer Genome Atlas, or TCGA. In their analysis, the researchers included five cancers that often have Fbw7 mutations: bladder, colorectal, head and neck, lung, and uterine cancers.

The way that we did it was to see if we could discover sets of genes that could predict which tumors of a certain type had the Fbw7 mutation. Our hypothesis was that if these sets of genes, in sum, are able to identify a tumor cell with an Fbw7 mutation, maybe they’re telling us something special about what the consequences of that Fbw7 mutation are — that this is some fundamental characteristic of the state of that tumor cell with that mutation in it.

And then my collaborators took their machine learning algorithm a step further. They trained it so they could look across all different kinds of cancer to identify shared properties of tumors that were dysregulated because of these Fbw7 mutations. The idea was that these shared networks may reveal the really core functionalities of what happens across cancers.

What did you find?

We found evidence of widespread dysregulation of metabolism that was the most predictive feature across all cancers that we studied. Several targets of this Fbw7 pathway are known to regulate metabolism, but it was pretty surprising that this [abnormal metabolism] would come across as the one conserved feature across all these different cancers.

Now, you can find lots of things computationally that may or may not be true. So we then used gene-editing methods to create these Fbw7 mutations in colorectal cancer cells in such a way that the only thing that differed was these mutations. And we took a tumor with a naturally occurring mutation in this Fbw7 pathway and corrected it back to normal. We were able to show, in both of these settings, that these Fbw7 mutations directly caused the abnormal metabolism.

Why was this finding about metabolism surprising?

Because a lot of the targets of Fbw7 are proteins that do things like cause cells to divide abnormally or are involved in the process of cell differentiation. We hadn’t really thought about metabolism as a main pathway to cancer. And the metabolic dysregulation was seen with different kinds of Fbw7 mutations, as well as tumors that have reduced amount of Fbw7, which was also pretty interesting. It really seemed to be a common feature.

How could this finding open the door to new cancer treatments in the future?

I don’t want to overstate it too much, but in some instances in which we looked, we were able to show that the alterations in metabolism rendered the cancer cells sensitive to inhibitors that target those metabolic pathways. This not only uncovers something about what these mutations are doing to cause these cancers to occur but reveals new targets for therapy to study as well.

Metabolism is one of these hallmarks of cancer that contributes to tumorigenesis [tumor formation]. [Metabolic changes] become a necessary enabling feature of cancer, and tumor cells can become dependent on that. So if you interfere with their ability to alter metabolism in the way that the tumor cells need to, it represents a vulnerability that wouldn’t be there in a normal cell.

Could this algorithm be applied to other problems like this one?

There’s lots of really important cancer genes that have these very diverse effects on various aspects of cell division and differentiation and metabolism, these complicated pathways. We think it’s likely that this same approach would be applicable to these, too.

What are the next steps?

One step is to study a preclinical model of Fbw7-driven cancer in a mouse. So far we’ve done these studies on human tumor cell lines [that is, human cancer cells growing in dishes in the lab], but we really need to now develop a platform in which we can study this in the kind of comprehensive detail we need to treat cancers that closely resemble human cancers.

Another step is to try to broaden this machine learning approach to study other complex and important genes that are involved in the development or maintenance of cancer.

The study was funded primarily by the National Cancer Institute with additional funding from the Turkish Academy of Sciences and the Science Academy of Turkey.

This article was originally published on May 7, 2018, by Hutch News. It is republished with permission.