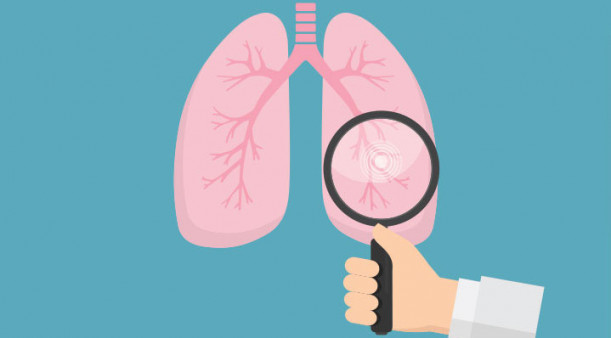 Immunotherapy drugs called checkpoint inhibitors have given many lung cancer patients a lifesaving new option. But patients with small cell lung cancer have seen little benefit from the new paradigm.

Based on these results, the team initiated a clinical trial to test the strategy in patients with advanced SCLC and have begun enrolling participants.

“Immune checkpoint inhibitors transformed the landscape for lung cancer but only had a modest benefit for small cell lung cancer. We need ways to make immune checkpoint inhibitors more effective for those patients,” said Dr. Joseph Hiatt, the physician-scientist who led the work in the Hutch lab of lung cancer researcher Dr. David MacPherson. The experimental drug induces changes in SCLC tumors that mimic the features seen in the minority of patient tumors that clearly benefit from checkpoint therapy.

The team hopes that the new drug will help expand the pool of patients with SCLC who could benefit from immunotherapy. In addition to testing efficacy, the trial is also designed to help researchers uncover biomarkers — molecular characteristics in tumors — that could identify the patients most likely to benefit from the treatment.

“We have a lot of excitement for the trial because there’s strong biological rationale for potentially allowing augmentation of immune responses in small cell lung cancer,” MacPherson said.

A need for better research and new options

More than 230,000 people will be diagnosed with lung cancer in the U.S in 2022, according to the National Cancer Institute. About 13% of those patients, or roughly 30,000 people, will have small cell lung cancer. Patients with SCLC face grim statistics: Only 7% of all patients with SCLC will live five years past diagnosis, and about half of patients with advanced disease who receive treatment will not survive past one year.

SCLC tumors generally respond well to chemotherapy — the only treatment available to these patients for decades — but they usually recur and spread quickly. In 2018, researchers found that immune checkpoint inhibitors, which help take the brakes off cancer-attacking immune cells called T cells, extend people’s lives by just two more months. Though small, the advance was enough for doctors to incorporate the immunotherapy into the SCLC standard of care.

SCLC tumors have lots of mutations that ought to make them easy targets for immune cells, which attack cells that appear “foreign.” So this makes these tumors’ lackluster responses to immunotherapy a challenging mystery to understand and overcome.

MacPherson has devoted his laboratory to rectifying the dearth of small cell lung cancer research and lack of treatment advancements. After Congress passed the 2013 Recalcitrant Cancer Act, which mandated more research focus on treatment-resistant cancers like SCLC, the NCI put together an SCLC consortium, which MacPherson joined.

He and his team used SCLC cells floating in patients’ blood to set up patient-derived xenografts, or PDX, models in which human tumor tissue grows in mice. These allow the group to test potential therapies on human SCLC tissue growing in an environment that more closely mimics a patient than a lab dish ever could. MacPherson’s work on SCLC became one of the four clinically focused lung cancer research projects in the Hutch’s NCI-funded Specialized Program of Research Excellence in lung cancer. The SPORE initiative is designed to accelerate the timeline from basic science breakthrough to clinical advancement.

As scientists put more effort into untangling the biology of SCLC, it became clear that there are several “flavors” of the disease, MacPherson said.

Different tumors carry different key mutations. And the pattern of genes that are turned on or off also varies between tumors. Investigators outlined a highly neuroendocrine, or NE, SCLC type, which has stronger neural and hormonal features than other tumor types, and an inflamed type, which shows signs of heightened immune activity. These types were also linked to prognosis: NE tumors tend to be more aggressive, while inflamed tumors often have a better prognosis.

MacPherson turned his attention to molecules that regulate DNA packaging, which can change which genes are on or off and affect tumor behavior. One regulator of DNA packaging is a molecule called LSD1. In a prior study, MacPherson and his team had tested an LSD1 inhibitor against SCLC patient-derived tumor tissue growing in immunocompromised mice, a PDX model derived from a chemo-resistant tumor, which melted away. Though other models didn’t respond as dramatically, the investigators saw that the LSD1 inhibitor suppressed NE features and turned up expression of a gene called Notch in every PDX model they tested it against.

At the time, other researchers began reporting on characteristics of SCLC tumors that respond to immunotherapy. They reported reduced NE features and higher levels of Notch.

“And that’s exactly what LSD1 inhibition was doing [in the lab],” MacPherson said.

This prompted the researchers to test whether they could make SCLC tumors sensitive to immunotherapy by using an LSD1 inhibitor to ramp down their NE qualities and ramp up Notch.

The team also found that significantly more immune cells made their way into tumors in doubly treated mice than in mice left untreated or given either treatment alone.

Additionally, the researchers revealed a key cellular change that helped explain bomedemstat’s immune-amplifying capabilities. They found that bomedemstat treatment boosted levels of a molecule that T cells can use to “see” the mutations lurking within tumor cells. Tumors that lack this molecule essentially hide from T cells, so turning this molecule back on could keep small cell tumors from flying under the immune system’s radar.

The laboratory results were so exciting — and meshed so well with clinical findings — that Hiatt and MacPherson have already opened a clinical trial in collaboration with Dr. Rafael Santana-Davila at the University of Washington. Imago Bioscience will provide bomedemstat to patients but is not funding or overseeing the trial. Two participants have enrolled so far.

In the current standard of care, patients with SCLC receive treatment in two phases: an initial phase of chemotherapy plus an immune checkpoint inhibitor, followed by a second phase of checkpoint inhibitor alone to maintain tumor regression. The trial will add bomedemstat to the maintenance phase to see if this drug can extend the length of time before a patient’s disease progresses or recurs. The scientists will compare data from patients on the trial to historical data to measure bomedemstat’s effect.

The trial is also designed to help scientists learn more about biological features of SCLC tumors that correlate with how well the drug combination works.

“We always want to do a better job of identifying who benefits the most from standard treatments or from new treatments,” Hiatt said. “But probably even more importantly, [we need to identify] who’s not going to benefit at all and would need a totally different strategy.”

So the trial team will also monitor cancer DNA found in patients’ blood (also known as a liquid biopsy) to see if they can uncover molecular markers that distinguish tumors that respond from those that don’t (and perhaps also hint at the molecular basis for a response). With Hutch colleague Dr. Gavin Ha, the team is developing a test that can look at patterns in DNA packaging proteins to glean information about the molecular state of the tumors.

“There’s also a lot to understand about how LSD1 inhibition is augmenting the immune response,” MacPherson said. “The next steps are to tease out its impact on the immune system more broadly and detail the molecular mechanisms involved.”

The team’s clinical ties strengthen their laboratory work, they said. His clinical experience informs what questions he tackles and how he designs his experiments, Hiatt said.

“It’s very rewarding to go back to the lab to try to come up with new strategies that could theoretically be helpful for these patients,” he said.

The laboratory studies were supported by funding from the Fred Hutch Lung SPORE. The ongoing clinical trial is funded by Fred Hutchinson Cancer Center.

This story was published by Fred Hutch News Service on August 3, 2022. It is republished with permission.