When Donna Hopkins was a little girl, her father nailed a basketball hoop onto a shed in the family’s backyard in Oak Hill, West Virginia. Soon, the self-described tomboy was sinking baskets with her siblings—four brothers and five sisters. “Then we played flag football, and that’s where I think I got my itch for sports,” she says. “Sometimes I think God instilled that in me because He knew I was going to need to be strong and healthy later on in my life.”

Hopkins’s athletic ability, teamed with a fierce competitive spirit, inevitably put her on a path to achievement in sports. During her junior year in high school, she played basketball and joined an Amateur Athletic Union track team. She went to college on a basketball scholarship. Once there, she received another scholarship, this time in track. Eventually, she joined her brother, a Marine, on his league’s intramural team and later played on the women’s traveling team. “I wasn’t military,” Hopkins explains. “But I ended up being able to play just because of the circumstances. That just fueled my passion for sports even more.”

In college, Hopkins majored in radio and TV communication. After graduation, she moved to the Washington, DC, metropolitan area where James Brown, now a CBS Sports reporter, became her mentor. Her TV sportscasting break came when Darrell Green, a former Hall of Fame cornerback for the Washington Football Team (formerly the Washington Redskins), spoke to a teammate about her. She became a cohost and reporter for the show and began working with Tony McGee, another former player on the team. Like dots on a linear path, Hopkins’s future seemed neatly mapped out. “At 10, I knew what I wanted to do,” she says.

Then one day, while sitting at work, Hopkins’s life veered off course. She touched the top of her chest and felt a lump. “The first thing I said to myself was, ‘Please don’t let it be the big C,’” she recalls. “When I got home, I didn’t discuss it with anybody. I immediately called my doctor the next day, and she told me to come in for a test.” At the time, Hopkins was 36 years old.

Hopkins’s X-rays showed nothing. Initially, health providers thought the mass was linked to her menstrual cycle, so they sent her to a breast specialist for more testing. After reviewing her mammogram and ultrasound, the specialist ordered more tests.

While waiting for her test results, Hopkins ran in the Race for the Cure, a breast cancer fundraising event in which she’d participated for almost 15 years. “That day, I ran the best race of all because I was running for myself,” she says. “I already knew that I had breast cancer, but I just hadn’t gotten the official results back.” 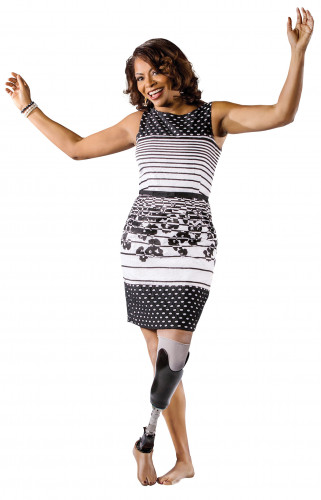 Hopkins’s cancer was a high-grade ductal carcinoma in situ with a single focus of microinvasion in the right breast. This meant the Stage I cancer was located in one area of the breast ducts; the grading indicated there was a higher risk the cancer would become invasive and possibly recur. A test showed that her cancerous breast tissue was negative for estrogen and progesterone and borderline for HER2 receptors, which ruled out hormone therapy and certain targeted therapies as treatment options.

Hopkins chose to have a lumpectomy, surgery that removes only the tumor and a small amount of surrounding normal breast tissue. Then her whole breast was irradiated. She continued her workouts at the gym while undergoing radiation. “I got back up to speed and moved on with my life,” she says. That year, her follow-up mammograms were clear.

But two years later, in 1999, her screening detected that the cancer had returned. “I had been losing weight, and I thought it was just because I was working out hard,” she says. This time, the cancer was closer to the chest wall in the same breast.

“My doctor had said that if the cancer came back in the same breast of course I would lose it,” Hopkins says. “And I was all right with having a mastectomy.”

With the support of a few friends, she decided to have breast reconstruction surgery at the same time. “I had to train myself all over again just to raise my arm up,” she says. “My chest was tight as a drum.”

But she wanted to run in the Race for the Cure again. The June event was scheduled right after her release from the hospital. Hopkins begged her doctor to allow her to race. “Just like the first time, I knew that I needed to do it again.” After an initial no, her surgeon relented, on the condition that she walk, not run, and stop if she began to feel hot.

“I had in drainage tubes and needed to constantly empty them,” Hopkins says. “People might say, ‘Good grief, that’s crazy,’ but for me, it was healing and a testimony to others that going through cancer doesn’t have to destroy you if you don’t allow it to.”

Hopkins walked in the race the day after she came out of surgery. She believes that was only possible because she was physically fit when she went in. Indeed, there is compelling evidence that physical activity improves quality of life in women with breast cancer and may protect against recurrence (see “Fitness and Breast Cancer”). She has been cancer-free for more than 20 years.

After recovery, Hopkins worked with the nonprofit Breast Cancer Care Foundation for five years. In 2005, she launched her own nonprofit, Hopkins Breast Cancer Inc., to give people with breast cancer a financial “helping hand” so they could meet everyday living expenses. 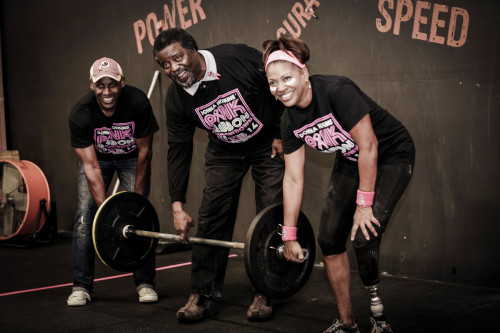 Then, in 2010, Hopkins faced another medical challenge. Complications from routine surgery to remove uterine fibroids almost killed her when the blood thinner she was given caused clots instead of preventing them.

Deathly sick, Hopkins was transferred to a trauma hospital. By then, her toes looked “like a piece of black paper or a chunk of coal,” she says.

Hopkins’s mom arrived from West Virginia to make decisions on her daughter’s behalf. “She told the doctors that I was very active, so they should amputate my leg below the knee,” Hopkins says. “This gave me an opportunity to be able to do everything I did before. They said that if I wasn’t healthy, then I definitely wouldn’t have made it because I lost almost 50 pounds in the hospital.”

When she was released, Hopkins—now outfitted with a prosthetic leg—went to Walter Reed National Military Medical Center to work with a physical therapist, who suggested she consider taking up rowing. At first, Hopkins was reluctant.

“I told her that I didn’t even know how to swim, so she said she’d teach me,” she says. “That’s when the competitor in me came out, and I told her I’d try it out.” She joined the MedStar adaptive rowing program at National Rehabilitation Hospital.

“I rowed professionally for four years trying to make it to the Paralympics,” she says. She played wheelchair basketball too. 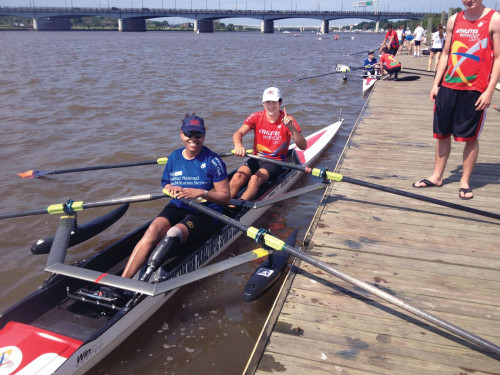 Then, Hopkins returned to track and field. Once again, she tried out for the Paralympics, missing the 100-meter trials by .33 seconds. She recounts her experiences in her 2018 memoir, Getting to the Other Side of Victory.

“When you go through cancer and you lose a breast, a lot of people might think, Oh, man, part of my femininity is gone,” she says. “But to me, choosing to lose a breast versus losing your life is not a hard decision. The same thing applies to losing a leg.”

Now 59, Hopkins firmly believes that she’s a much better person after emerging on the other side of everything she experienced.

“No one likes going through cancer—who does? And, no, I don’t like my leg being gone because I’m an athlete,” she says. “But I am a much better person all the way around because I see things in a different way, which allows me not to miss out on living life to its fullest.”

Then she adds, “Sometimes we cheat ourselves out of life because we cannot get past what we went through. I’ve never wanted to get stuck there. Keep moving forward instead of backward.”