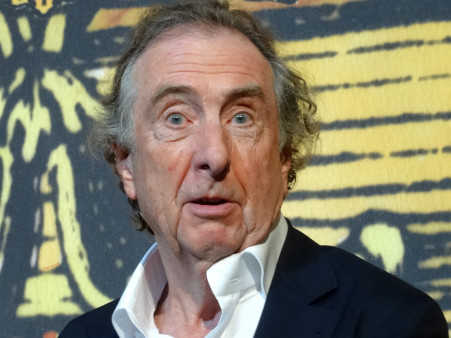 Now free of pancreatic cancer—and a former “Masked Singer” hedgehog!—Eric Idle launched the Bright Side Fund at Stand Up To Cancer.

Legendary comedian, actor, singer-songwriter and founder of the comedy troupe Monty Python, Eric Idle recently opened up about his experience with pancreatic cancer and how it led to the formation of the Bright Side Fund at Stand Up To Cancer to support pancreatic cancer research.

About three years ago, during a routine health checkup, Idle’s doctor, David Kipper, PhD, also a friend of the actor’s, suggested additional tests, just in case. One of those tests revealed a tumor on Idle’s pancreas that, luckily, had yet to spread.

Idle recounts his journey in a delightful Time magazine article that’s written from his sunny and humorous perspective (would you expect anything less from the man who sang “Always Look on the Bright Side of Life” while being crucified in the movie Life of Brian?).

“I want to encourage people in families at high risk of pancreatic cancer to explore the newer tests available for detecting the disease early,” writes @EricIdle.

In the article, Idle recalls Kipper giving him the diagnosis: “Here’s the good news, Eric, neither the technician nor anyone here has ever seen this at this stage. It’s unattached, no nodes, and we have a very good chance of whipping it out.”

As the Cancer Health Basics on Pancreatic Cancer explains, the pancreas is an organ that sits behind the stomach and produces enzymes that are released into the intestines to help digest food. Cells within the pancreas—known as islets of Langerhans—produce the hormones insulin and glucagon, which control blood sugar levels.

Although Idle and his family were grateful to have caught the cancer early, they were still anxious. To ease their fears, they decided to refer to the diagnosis as “Kenny,” which Idle considered “far less threatening.”

Soon, Idle, under the pseudonym “Mr. Cheeky” to avoid tabloid gossip, found himself at Cedars-Sinai Medical Center in Los Angeles, where Kipper and his team performed a five-hour surgery to remove the entire tumor.

“He has cut it all out. It was not attached to anything, and my lymph nodes were clear. The cancer is gone,” Idle wrote in the Time article. “They could find no further trace in my body. I had been a dead man walking. I am going to live.”

Idle is aware that he is incredibly lucky to have a friend in Kipper, who insisted on additional tests in the first place. He recalls hugging his friend and telling him, “There’s no doubt you just saved my life.”

After his recovery, he was invited to join season 8 of the reality show competition The Masked Singer, and he accepted. “I did the Masked Singer because I wanted to see if I could still do it after I had survived Pancreatic Cancer,” he tweeted September 21, adding “Now I’m starting the Bright Side Fund to raise money to help save others. I have partnered with Stand Up To Cancer.”

Funny, I just happened to catch that on the TV. On a break from work. And I never watch prime time television.

I thought it was Elton John.

Today, Idle is ready to share his story with the world and encourage high-risk individuals to get tested for pancreatic cancer and explore newer tests available for early detection.

“Kipper said that if we had delayed by only two weeks, I would not even have seen the surgeon,” Idle wrote. “So please talk to your doctor to understand which screening tests may be right for you and tell your loved ones to do the same. Help me help others like me to survive. And, all together now: ‘Always look on the bright side of life….’”

And we’ll let Idle leave you with this relevant message: