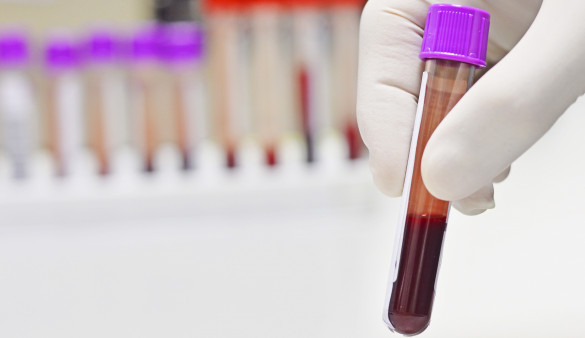 As new treatments for multiple myeloma have extended patient survival—from an average of three years to more than 10 in some cases—physicians and researchers face a new challenge: how to predict a drug’s long-term effectiveness? How to tell, early on, whether one drug is likely to extend patients’ lives more than another?

At Dana-Farber’s Jerome Lipper Multiple Myeloma Center, researchers have identified one such sign. In a study published in the journal Blood, investigators found that, after treatment, patients with no myeloma cells within 1 million bone marrow cells were more likely to have a lengthy remission than those with higher myeloma cell counts. They propose that the less-than-one-in-a-million level—formally known as an absence of “minimal residual disease” (MRD)—be adopted as the new standard for managing myeloma and evaluating myeloma drugs.

“The success of new agents in extending the lives of patients with multiple myeloma has created the need to identify biomarkers of drugs’ effectiveness,” says study senior author Nikhil Munshi, MD, director of Basic and Correlative Science at the Jerome Lipper Multiple Myeloma Center. “Our findings show that MRD status can be such a biomarker—not only in clinical trials of potential new therapies but inpatients treated with standard therapies. It has the potential to change the practice of myeloma treatment.”

The traditional criterion of myeloma drugs’ effectiveness is whether they generate a complete response, defined as an absence of any myeloma cells within 100 bone marrow cells. Even at such low concentrations, however, myeloma is rarely vanquished: Virtually all patients who achieve a complete response eventually relapse, Munshi notes.

With the development of next-generation DNA sequencing, it has become possible to detect myeloma cells at a much deeper level. This September, in fact, the U.S. Food and Drug Administration (FDA) authorized the first test based on next-generation sequencing to detect very low levels of cancer cells in patients with myeloma or acute lymphoblastic leukemia.

The study explored whether MRD status is a better predictor of a long-lasting remission than complete response is. Data for the investigation came from a collaborative study between Dana-Farber and the French Myeloma Group that enrolled 700 patients with multiple myeloma between 2010 and 2012. Patients received either a standard chemotherapy regimen or a shorter, more intense round of chemotherapy followed by a transplant of their own stem cells. Bone marrow samples were collected from all patients at the beginning and end of maintenance therapy—a 12-month period of follow-up treatment intended to prevent or delay the cancer’s return—and were analyzed for MRD.

“We showed that when patients have deep responses to therapy, they have much better outcomes: they relapse later and live longer,” Munshi comments. “The effect is so great that patients with high-risk myeloma who achieve MRD negativity have essentially the same rate of relapse as patients with standard-risk myeloma.”

MRD status can be used to evaluate patients’ response to therapy at all stages of treatment, he continues—prior to a stem cell transplant (to judge the effectiveness of pre-transplant chemotherapy); after transplant (to gauge the success of the transplant); and during and after maintenance therapy.

“MRD is one of the most promising biomarkers identified to date and has long been used in patients with lymphoma and chronic myelogenous leukemia, Munshi observes. “It will now inform our therapy in myeloma with the eventual goal of achieving MRD-negative status.”

This article was originally published on December 14, 2018, by Dana-Farber Cancer Institute. It is republished with permission.