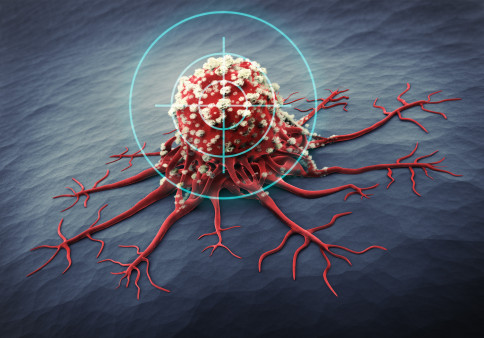 A novel cancer drug that mimics a virus helps the immune system identify and target tumors that might otherwise be missed by immunotherapy. These findings were published in Science Translational Medicine.

“In some patients, tumors escape the immune system through mutations in genes involved in the interferon signaling pathway,” coauthor Anusha Kalbasi, MD, of the University of California, Los Angeles (UCLA), said in a press release. “This is a critical pathway because it normally allows tumors to increase their antigen presentation, an intricate machinery that makes tumors visible to T cells.”

Called BO-112, the new drug resembles the double-stranded RNA structure found in certain viruses that can stimulate an immune response. Once inside a tumor, BO-112 has the ability to alert the immune system and kick-start a protective response to attack cancer cells.

“I do think the power of BO-112 is in its ability to enable other immunotherapies to maximize their benefit,” Kalbasi told Live Science.

One form of immunotherapy relies on T cells that recognize antigens on cancer cells and set in motion an immune response that helps destroy tumors. Called adoptive T-cell therapy, the process involves removing a sample of a patient’s immune cells and training them to better spot cancer cells before reintroducing them into the patient’s body. T cells rely on antigens to detect cancer cells and target them for destruction. But some tumors can subvert the process of making these antigens, in effect blinding the T cells.

Two different studies, both published on the same day, evaluated the effect of BO-112 in different models—one in cell cultures and lab mice and the other in humans. Both studies were essentially attempting to make tumor cells more visible to T cells.

In the first, Kalbasi and colleagues studied the effect of BO-112 in cells and in a mouse model of melanoma. To begin with, they created mutant mouse tumor cells in the laboratory that displayed fewer antigens on their surfaces. These engineered tumor cells went unnoticed by T cells.

Next, the team made these same engineered mouse tumor cells produce antigens on their surfaces by expressing another gene. Since the T cells could now recognize the cancer cells, the immune system could attack these tumors.

By turning on this gene in mice, the team was able to achieve the same result. But to make the process more feasible for human testing, they zeroed in on BO-112, which could trigger the immune system in a similar fashion. In lieu of turning on a particular gene, BO-112 induces an immune response akin to cells being infected by a virus. This leads to an increase in the presence of antigens on the surface of tumor cells.

Upon injecting this drug into mice, the tumors either decreased in size or stopped growing for a period of time, Kalbasi told Live Science. This treatment was most effective in mice with smaller tumors, with the tumors shrinking dramatically or even disappearing. But in mice with large tumors, the cancer cells seemed to recoup their strength.

In the second study, researchers evaluated the safety and efficacy of BO-112, with and without added cancer drugs, in 44 people. Over the course of this small clinical trial, the treatment was generally safe, and most participants responded. But three of the participants experienced severe reactions, such as lung inflammation and a marked drop in platelet levels.

Of the participants who did not experience such adverse reactions, 28 people were given BO-112 in combination with Opdivo (nivolumab) or Keytruda (pembrolizumab), two checkpoint inhibitor immunotherapy drugs. These drugs increase T-cell activity, ramping up their attack on tumors. The researchers found that adding BO-112 to the mix made cancer cells more receptive to immunotherapy. After eight to 12 weeks, three participants experienced tumor shrinkage and 10 others had their tumors stop growing.

“New strategies to promote antigen presentation to make tumors more visible to the immune system will allow immunotherapy to be effective for even more tumor types,” coauthor Antoni Ribas, MD, PhD, of UCLA, said in the press release.

While these results are promising for hard-to-treat tumors that are resistant to immunotherapy, the researchers cautioned that larger clinical trials would be needed to ascertain BO-112’s effectiveness.

Since BO-112 is injected directly into tumors, early clinical trials will be restricted to easy-to-reach tumors, like those seen in breast cancer and melanoma. Currently, Kalbasi is conducting a clinical trial for BO-112 in combination with Opdivo in people with sarcoma.

“The exciting opportunity presented by these two studies, both in the lab and in patients, is that we have medicines that can improve antigen presentation and thereby make immunotherapies—which would otherwise fail—become effective in inducing cancer remissions,” Joshua Brody, MD, of the Icahn School of Medicine at Mount Sinai in New York City, who was not involved in the study, told Live Science.

Click here to read the abstract of the first study in Science Translational Medicine.

Click here to read the abstract of the second study in Science Translational Medicine.