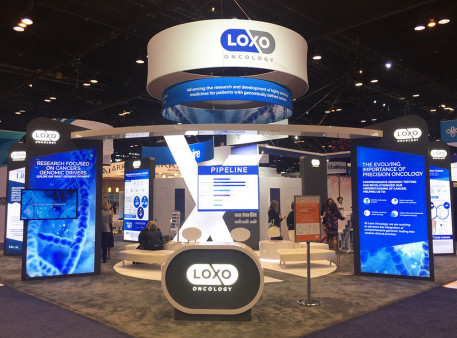 LOXO-292 demonstrates durable antitumor activity in people with lung, thyroid and other cancers with RET mutations.

A new targeted therapy directed against RET mutations, which occur in many types of cancer, demonstrated promising activity in an early clinical trial presented at the American Society of Clinical Oncology (ASCO) annual meeting this week in Chicago.

If LOXO-292 continues to do well in larger studies, it could become part of an emerging paradigm of treating cancer based on its genetic characteristics regardless of where it occurs in the body, known as being site or location agnostic.

Loxo made headlines at last year’s ASCO meeting with its experimental drug larotrectinib, which is active against all types of cancer with tropomyosin receptor kinase fusions. Larotrectinib received a breakthrough therapy designation and priority review status from the Food and Drug Administration; an approval decision is expected in November.

RET plays a role in cell proliferation. Oncogenic (cancer-causing) RET mutations and fusions can trigger the development of cancer. RET mutations occur in more than 60 percent of medullary thyroid cancers, while RET fusions can be found in around 20 percent of papillary thyroid cancers, 2 percent of non-small-cell lung cancers (NSCLC) and a small proportion—less than 1 percent—of several other cancers including colorectal, ovarian, pancreatic and salivary gland tumors.

LIBRETTO-001 enrolled people with thyroid cancer, lung cancer and a variety of other cancers with RET mutations or fusions. As of April, 82 participants—about half men and half women—had been treated. These included 49 people with RET fusions (38 with NSCLC, nine with papillary thyroid cancer and two with pancreatic cancer) and 29 with RET-mutated medullary thyroid cancer. Four had no known activating RET alterations. Twelve had brain metastasis (cancer that has spread to the brain). About two thirds had previously been treated with multikinase inhibitors and some had multikinase inhibitor resistance mutations. Nearly half had previously received chemotherapy and a quarter had tried immunotherapy.

Participants received LOXO-292 by mouth in 28-day cycles, at escalating doses ranging from 20 milligrams once daily to 240 mg twice daily. The primary aim of the study was determination of a maximum tolerated dose. Secondary endpoints included safety, overall response rate and duration of response.

The overall response rate, meaning complete or partial tumor shrinkage, was 77 percent for people with RET fusions and 45 percent (including one complete response) for those with RET-mutated medullary thyroid cancer. In contrast, none of the patients without RET alterations responded.

LOXO-292 showed activity regardless of prior treatment with multikinase inhibitors and presence of the M918T or V804M “gatekeeper” resistance mutations. Three of the patients with brain metastasis had partial brain tumor shrinkage; none of the rest experienced disease progression.

The median duration of response was not reached because more than 90 percent of participants were still on treatment and responses were ongoing. The first enrolled lung cancer patient was still responding 10 months later, at the time of the data cutoff for this analysis.

Treatment with LOXO-292 was generally safe and well tolerated. A maximum tolerated dose was not reached, and no one had to reduce his or her dose due to toxicities. The most common adverse events were fatigue (20 percent), diarrhea (16 percent) and constipation (15 percent), mostly mild or moderate. There were two severe adverse events attributed to the study drug (tumor lysis syndrome and elevated ALT). The researchers said the safety profile is “consistent with highly selective drug design,” meaning the drug has little activity against normal cells.

Based on these results, a LOXO-292 dose of 160 mg twice daily was selected and an expansion cohort is now enrolling, according to a Loxo press release.

Another investigational drug targeting RET, BluePrint Medicines’ BLU-667, has also demonstrated promising activity, shrinking tumors in about 40 percent of patients with oncogenic RET alterations, according to a Phase I study presented at the American Association for Cancer Research annual meeting in April.

Cancer therapies have traditionally been developed, tested and prescribed for tumors in specific parts of the body. But treatments that focus on tumor characteristics regardless of site could reduce the need for separate studies and would be a boon for people with rare cancers that do not have their own trials. This approach is also likely to speed up the adoption of routine genetic testing to match patients with the drugs most likely to work for them.

Click here for Loxo’s press release about the study, which includes a link to the ASCO slide presentation.