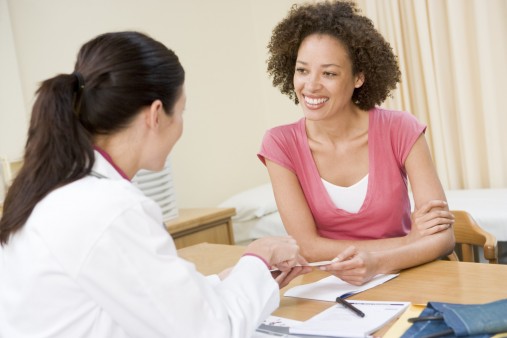 The impact of surviving ovarian cancer on a patient’s sexual health and function can also be helped with minor interventions and more communication. Thinkstock (Model(s) used for illustrative purposes only)

During a half-day session of physical and mental exercises, participants learned how to empower themselves and regain confidence

Ovarian cancer often goes undetected before it reaches more invasive stages, but there is one aspect of the disease that frequently remains ignored even after diagnosis: Its impact upon a patient’s sexual health and function.

Now, as research and treatment advances are allowing more women to live longer and healthier with ovarian cancer, Dana-Farber is showing that this long-term after-effect can also be helped with minor interventions—and more communication—between caregivers and patients.

In a Dana-Farber study led by Sharon Bober, PhD, director of the Sexual Health Program for Cancer Patients and Survivors, in collaboration with gynecologic oncologist 46 ovarian cancer patients with documented, treatment-related sexual dysfunction – a common side effect of ovarian cancer treatment—took part in a half-day intervention in which they received sexual health rehabilitation training, relaxation, and cognitive behavior therapy skills to address symptoms such as vaginal dryness or loss of satisfaction with sexual activity. Patients surveyed two and six months after the low-intensity intervention reported significant improvement in their overall sexual functionality and psychological distress.

“Fortunately, women often live for many years after the diagnosis of ovarian cancer treatment, however it is also not uncommon to suffer from a loss of quality of life because of issues related to changes in vaginal health, intensification of menopausal symptoms, and pain with sexual activity,” says Bober. “In addition, many ovarian cancer patients are in their mid-50s or older, and there is a cultural bias against addressing sexual health in women who are in mid-life and beyond. It is often assumed that sexual health is no longer an important factor in this period of life. We know this is simply not true.”

Women were initially surveyed two months before and then again on the day of the intervention, Bober explains, to show that the problems they faced would continue if left unaddressed. The half-day session was designed for participants who had been in treatment an average of six years, regardless of whether they were partnered or single. The group ranged in age from the mid-30s to early 70s, with an average age of 55.

Participants learned exercises to relax and strengthen their pelvic muscles, and how to address strength and negative thinking related to sexual activity through guided meditation. They discussed how to communicate with partners and their doctors about issues of concern, and committed themselves to addressing two goals during the next month—as well as action steps needed to reach them.

In phone calls a month after the session, and in the two- and six-month surveys, patients reported excellent progress toward reaching their goals. Heidi Tessmer, 51, says that since her August 2013 diagnosis, surgery, and chemotherapy, she had problems with rapid early menopause, physical discomfort, and body image – challenges she felt that she and her husband had to handle by themselves.

“Now, I’m doing exercises for my pelvic muscles and focusing on my core. I feel much better about myself,” says Tessmer. “More importantly, I don’t feel like I’m alone.”

The results, Bober says, warrant the development of a larger randomized control trial. They also speak to the importance of further training for clinicians in how to address these sensitive issues with patients.

This article was originally published on January 3, 2018, by Dana-Farber Cancer Institute. It is republished with permission.