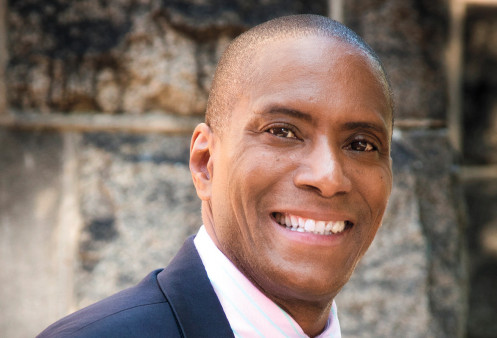 A New Kind of Intimacy

Robert Ginyard, 57, lives in Baltimore with his wife and two children.

In 2010, at age 48, I was diagnosed with Stage III prostate cancer. After being treated with surgery to remove the prostate gland, followed by radiation treatment and hormone therapy, I thought I would fade into obscurity and not tell anyone that I faced cancer at all.

I would never have imagined sharing my prostate cancer story—and some of my most private moments—in front of strangers across the country. But then I got involved with the American Cancer Society in Baltimore. I gave a few talks at their events and later for the prostate cancer nonprofit ZERO (ZeroCancer.org), where I eventually become board chair.

I can’t say prostate cancer was a good thing, but I now have a new understanding of intimacy and a more positive outlook on life.

During and for a brief period after my hormone and radiation treatments, I experienced some challenging moments when it came to sharing physical moments with my wife. For those of you who might need a bit more clarity, let’s just say mission control wasn’t sending instructions for liftoff; I’ll leave it there. During this time, I began to see intimacy in a new light. It was no longer about what was below my waistline but about engaging my mind to think about the totality of connection and what it means to my wife.

Before prostate cancer, my thoughts about intimacy—like those of many men I’ve talked to—were primarily focused on the physical connection. Oh, sure, I knew that intimacy involved much more than that. But it really didn’t hit home for me until the physical aspect of intimacy became, well, challenging. It was during my downtime while undergoing treatment that I connected with my wife on many deeper levels—mentally, physically and spiritually.

I found myself observing her doing some of the most routine things, such as tilting her head slightly to put on her earrings, wrapping our daughters’ hair in ponytails or standing in front of the mirror while deciding which outfit to wear. Simple things, right? Yet these simple things added so much to our intimate moments. Holding hands, cuddling and engaging in deep conversations were as stimulating as lovemaking. I know you’re probably saying, “Yeah, yeah, now bring on the sex.” But trust and believe me, women are often so beyond sex—they want someone who can stimulate and engage the mind as much as the body.

The fact that I am still alive to enjoy life with my wife and our daughters added to my overall happiness, which in turn made our intimate moments more meaningful. And yes, even with all this intimacy talk, my manhood remains intact. I’m still the one responsible for fixing stuff around the house (with the help of YouTube), taking out the trash and squashing centipedes that climb up the wall. The only difference is that I’ve discovered a whole new kind of strength.