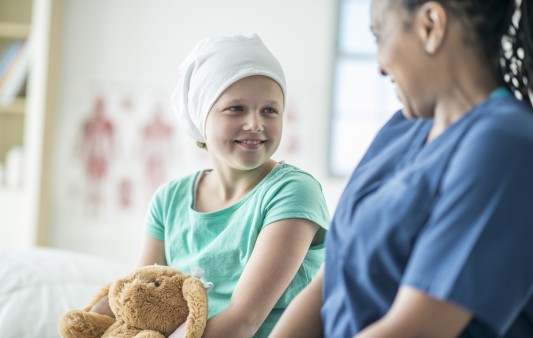 A recently opened study at Seattle Children’s Hospital will evaluate the first chimeric antigen receptor T-cell (CAR-T) therapy designed to simultaneously attack two different targets on cancer cells in the hope that this approach will lead to longer remission.

The Phase I trial, dubbed PLAT-05 (Pediatric Leukemia Adoptive Therapy), will enroll children with relapsed to refractory (nonresponsive to other treatment) acute lymphoblastic leukemia (ALL) that expresses CD19 and CD22, two receptors on cancerous precursor B cells that grow out of control in people with leukemia.

CAR-T therapy reprograms T cells to attack cancer cells. A sample of normal T cells is collected and sent to a manufacturing facility, where they are genetically modified with receptors that bind to specific markers on cancer cells, creating a customized therapy for each patient.

The first two approved CAR-T therapies—Novartis’s Kymriah (tisagenlecleucel) and Kite Pharma’s Yescarta (axicabtagene ciloleucel)—are designed to target the CD19 protein. The Food and Drug Administration approved Kymriah in August for children and young adults with ALL and Yescarta in October for adults with relapsed or refractory large B-cell lymphoma.

The experimental therapy will incorporate receptors for both CD19 and CD22. Researchers hope that targeting both antigens at the same time will make it harder for the cancer to develop resistance and will increase the length of time before cancer recurrence. The goal of the study is to reduce the relapse rate by almost half, according to a press release about the trial.

“This is an exciting time where we’re at the forefront of advancing the CAR T-cell immunotherapy field by pioneering strategies to improve long-term outcomes for children and young adults,” said PLAT-05 lead investigator Rebecca Gardner, MD, an oncologist at Seattle Children’s Hospital. “In launching a bilateral attack on the cancer cells, we hope this trial will help us develop a T-cell therapy that leads to long-term remission for many more of our patients."

In a previous study, PLAT-02, 93 percent of children with ALL achieved complete remission, but half of them later relapsed. This occurred either because the engineered T cells did not last in the body or because the cancer evolved in a way that let it evade the attackers. In the latter case, some of the leukemia cells switched from expressing CD19 to expressing CD22. The new dual CAR-T therapy will be able to recognize both receptors, so it will still be able to fight the cancer if this switch happens.

So far the CAR-T approach has worked best against blood cancers like leukemia and lymphoma. But researchers at Seattle Children’s Hospital are planning other CAR-T therapy trials for cancers that form solid tumors, including brain cancer.

"We believe that T-cell immunotherapy holds tremendous potential to combat leukemia and several other types of pediatric cancer,” Gardner said. “Leukemia is just the tip of the iceberg, and we hope to develop a therapy that can be given to patients as a first line of defense, greatly reducing the side effects of cancer treatment.”

Click here to read a press release about the study.

Click here for more information about the PLAT-05 trial.