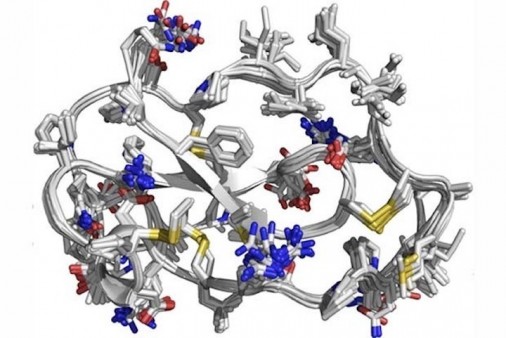 A 3-D model of a cystine-dense peptide produced and characterized on a new platform developed by scientists at Fred Hutch. Eighteen different views of the peptide are superimposed, and show that the peptide is remarkably rigid. Courtesy of Dr. Roland Strong / Fred Hutch

A team of researchers based at Fred Hutchinson Cancer Research Center has built a large-scale system for producing, screening and characterizing a class of tiny protein knots that are a relatively untapped source of new drugs to treat tough diseases, like brain cancer. The small proteins, or peptides, are dubbed “cystine-dense peptides” after the type of strong chemical bond that shapes and stabilizes them.

“This is revealing that this is a very powerful platform with the potential to be used not only for cancer drugs, but many other types of drugs,” said Jim Olson, MD, PhD, of Fred Hutch, one of the leaders of the work, which was published February 26 in the journal Nature Structural & Molecular Biology.

The researchers say that these small proteins are such promising fodder for drug development because they have a combination of qualities that are possessed only in part by most of today’s drugs: The small size of cystine-dense peptides allows them to slip into hard-to-reach parts of the body (like the brain), but they’re also stable and highly specific for their targets, thanks to their tightly bound-up, precisely shaped structures.

Cystine-dense peptides are found throughout the natural world, which offers plentiful examples of their potency. Take, for instance, the deadly venom of a type of sea snail.

“If you’ve ever seen a cone snail take down a fish,” began Colin Correnti, PhD, one of the lead scientists on the project.

“If you’ve ever seen a cone snail take down a person,” interjected his colleague Roland Strong, PhD, as the two sat in Strong’s office to discuss their work.

“It’s like, wow, this happens really fast,” Correnti continued. “So this molecular space is very interesting.”

Yet the chemical qualities that would make cystine-dense peptides such ideal drugs have also made them elusive to scientists interested in harnessing their power.

“The big problem in using these for drug development is that they’re hard to make, because [each one is] a little, knotted, disulfide mess,” Strong said, slipping into biochemistry-speak to refer to the molecules’ tight bonds. With cystine-dense peptides, he explained, traditional methods for making or extracting proteins are various combinations of impossible, prohibitively expensive, unscalable or dangerous (See: snail, cone).

As graduate students in Strong’s lab several years ago, Correnti and colleague Ashok Bandaranayake, PhD, developed a method that overcomes some of those problems. In the new paper, the team describes how they optimized their system, produced hundreds of different kinds of cystine-dense peptides, mapped the 3-D structures of a dozen of them and proposed the first structure-based system for classifying all of them.

What’s especially exciting about their technological platform, the researchers said, is that it doesn’t limit them to what nature produces. It offers the capability to tweak or even, theoretically, wholly reconfigure naturally occurring structures to come up with a cystine-dense peptide that’s optimized for a particular therapeutic purpose.

“We want to turn these natural drugs, as they exist in nature, into drugs that can do things that we want them to do—like go after cancers or [other] really difficult targets,” Correnti explained.

For example, Strong said, imagine two of these tiny proteins, one that travels to a particular part of the body where you’d want a drug to go—say, the brain—and another that binds a target of interest—say, a molecule found on tumors. With the methods the team has developed, it’s possible to “take the functional half of one and fuse it to the targeting half of another one, and generate a wholly novel molecule,” the scientist said. "That’s very ambitious, but now it’s something that you could even conceive of.”

Fred Hutch’s Molecular Design and Therapeutics core facility is based on the team’s innovations. A rare example of a high-throughput drug-discovery facility in an academic institution, the core provides expertise and services to researchers across the center and at many other institutions who want to develop protein-based treatments for conditions ranging from cancer to arthritis.

Thanks to this new platform, the team has already discovered some potential new drug candidates, and they plan to publish reports of these soon.

“This is a really great example of how fundamental basic science has created opportunities that can be translated into the clinic, hopefully, one day,” Correnti said.

The project’s leaders were Fred Hutch faculty members Strong and Olson, along with Correnti and Mesfin Gewe, PhD, both Olson Lab staff scientists. Grants from the National Institutes of Health and gifts from numerous private philanthropists and philanthropic foundations funded the work.

This article was originally published on February 26, 2018, by Hutch News. It is republished with permission.