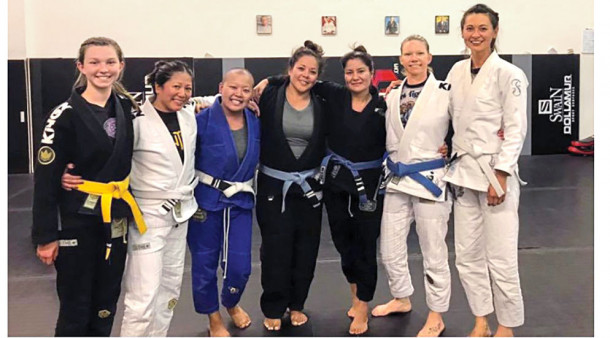 Avie Barron (in blue) at jiujitsu training in July 2017, during her third round of chemo Courtesy of Avie Barron

A dedicated student of jiujitsu, Avie Barron, 36, was diagnosed with non-Hodgkin lymphoma in her right lung. Since then, she’s continued to learn how to breathe again.

September 14, 2020 • As told to Meave Gallagher and Kate Ferguson

I kept having serious shortness of breath while doing jiujitsu. The Thursday before Memorial Day, I almost passed out after jogging 20 steps. My husband, Tim, and our jiujitsu coach both insisted that I go to urgent care. I drove myself there and explained my symptoms. They did a chest X-ray, and it was cloudy. They sent me to get a CT scan at a bigger hospital, where they found the tumor.

I had so much fluid in my lungs that they couldn’t release me until the doctor saw me, which wouldn’t be until after the long weekend. The fluid in my right lung caused a crackling sound when I breathed, shortness of breath and coughing. They drained it and sent a biopsy of the mass for testing. It was intense.

Right after Memorial Day, I got my diagnosis: primary mediastinal large B-cell lymphoma, Stage II. I had an 11 centimeter tumor on my right lung pressing on my artery. That location eliminated surgery as an option—they didn’t want to risk damaging my heart. I started on an aggressive chemotherapy regimen right away. They wanted to keep me in the hospital, but my specialist disagreed: He said just one day of infusion, three or four days of oral treatment and then 21 days of rest. After my first round and a week in the hospital, I was finally able to go home.

The first three rounds of chemo were OK, but it got progressively worse. The fourth round really hit me. My hair and my appetite were gone, and the nausea really started to affect me. Being so active and so young and having young kids—9, 5 and 4—we were always on the go. To just stop and force myself to lie on the couch and rest was really hard.

After the seventh round of chemo, my doctor raised the possibility of a stem cell transplant. The prospect of having to be in the hospital for three to four months—isolated from my family and not being able to see my kids or to go home to them and tuck them in—was crushing. That’s when it really, really hit Tim and me hard. Our kids started crying and asking big questions: “Is God taking you away from us?” 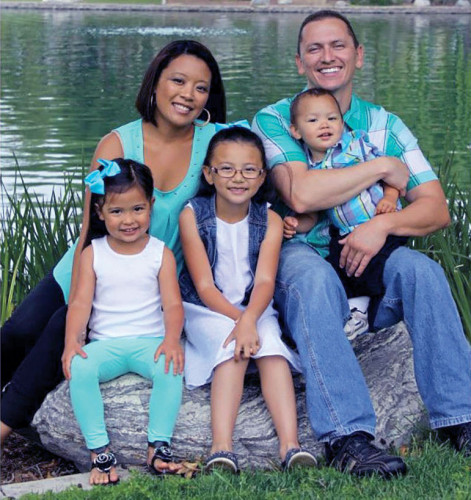 Avie and Tim Barron with (from left) children Jamie Lynne, Paige and ElijahCourtesy of Avie Barron

After my last round of chemo, my doctor referred me to a specialist. My PET scan and biopsy showed that my tumor was “dead.” It will never be gone, but it was dormant. No transplant! Instead, I would start three weeks of radiation in December. It was an early Christmas present for all of us.

My first scan after the radiation treatment came back clean. I was in remission. Now, I had to start figuring out what life after cancer would be like for me and my family.

I gave testimony in my church about my experience. I was scared, but I felt like I was being called to do it. Our community had done so much for us, stepping in when they saw we needed help, not taking our “No, thank you” for an answer. It was really humbling to see how much our family was loved. My message is: Don’t turn away the help.

Exactly three years from us signing up for jiujitsu, I was presented with a blue belt.

This blue strip of cloth is going to be my reminder that not only did I beat cancer, but I crushed that voice inside myself that said I couldn’t and shouldn’t continue my martial arts training.

Yesterday, my Facebook account did that thing where it showed me a memory from a few years ago. I was well into my third round of chemo, surrounded by some of the fierce ladies I trained with on my team in 2017. Back then, I had no idea if I was going to be able to beat the cancer or if the chemo and radiation were going to make my body so weak that I wouldn’t be able to keep training. But two years later, I’m still training, healthy and happy despite days when the aftermath of chemo hits me harder.

In the last month, some pain I’ve been feeling in my right breast has gotten worse. So right now, I’m sitting in the waiting room trying to stop nasty thoughts from creeping in. What if this means I have to do chemo and surgery and experience all the side effects all over again?

I finally received the results from my visit in the mail with a message saying, “There is no evidence of breast cancer on your mammogram and/or ultrasound.” But the letter came with a disclaimer that even though nothing was found, there could still be something, so I should set up another appointment. But COVID-19 made it extremely difficult to schedule any kind of appointment.

I finally booked an appointment with a primary care doctor who said the pain in my breast was normal. I asked if it could be related to my birth control but was told there is no connection.

We decided to switch providers, and I was able to see a specialist right away. My IUD was removed, and my doctor confirmed that the birth control was definitely a root cause of many of the symptoms I was told were normal.”

Lymphoma occurs when white blood cells, usually in the lymph nodes, grow out of control. Primary mediastinal large B-cell lymphoma (PMBCL) is a type of non-Hodgkin lymphoma that starts in the space between the lungs behind the breastbone. It is most common in young women.

PMBCL is often treated with a regimen that includes four chemotherapy drugs and a targeted therapy. Some patients may also receive radiation, stem cell transplants, immunotherapy or CAR-T therapy.