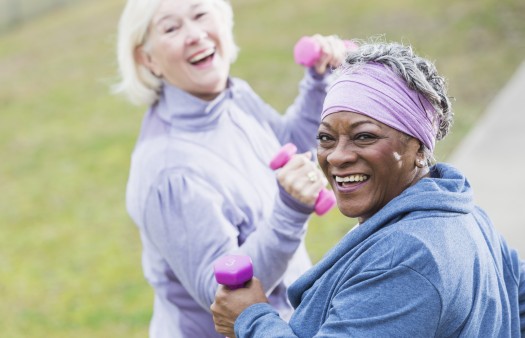 People With Cancer Benefit From Exercise During and After Treatment

Studies show that exercise can ease chemotherapy side effects and improve mobility after surgery.

Exercise during treatment for breast or colon cancer has multiple benefits, including reduced fatigue and improved ability to remain physically active over the long term, according to a study presented at the 2018 Cancer Survivorship Symposium last week in Orlando.

Other studies presented at the meeting showed that exercise helps women with breast cancer regain a full range of motion after surgery to remove underarm lymph nodes, and a web-based tool can help adolescent cancer survivors stay active after treatment.

“It is well known that exercise during chemotherapy can lessen treatment-related side effects, such as fatigue, pain and nausea,” Anne M. May, PhD, of University Medical Center Utrecht in the Netherlands, said in a press release issued by the American Society of Clinical Oncology (ASCO). “Our study is the first to show that people who are physically active during treatment maintain higher levels of physical activity in the long run, and this is really important for their health and well-being.”

May presented follow-up results from the PACT study, which evaluated the effects of a supervised exercise program for breast and colon cancer patients undergoing adjuvant treatment. Adjuvant therapy refers to medications or radiation therapy given after surgery to kill off any remaining cancer and prevent relapse.

The PACT researchers previously reported that participants in the exercise program had improvements in fatigue and physical fitness at the end of the intervention. May’s team asked whether the program also led to long-term benefits.

PACT initially enrolled 204 breast cancer patients and 33 colon cancer patients at seven centers in the Netherlands who underwent adjuvant treatment with chemotherapy; a majority also received radiation therapy. Most were women and the average age was 51. They were newly diagnosed and did not have metastatic disease, or cancer spread to other parts of the body. Of these, 128 patients responded to a request to participate in the long-term follow-up assessment.

Participants were randomly assigned to take part in an 18-week exercise program or to receive the usual care. The program involved 60 minutes of moderate- to high-intensity aerobic and strength training twice weekly under the supervision of a physical therapist plus a recommendation to do at least 30 minutes of home-based physical activity three or more days per week.

People in the exercise group experienced less physical fatigue at the four-year mark compared with the usual care group, May reported. This difference was not statistically significant, meaning it could have been attributable to chance. However, the exercise group did report significantly higher levels of moderate to vigorous physical activity, averaging 90 minutes a day (more than 600 minutes per week), compared with 70 minutes a day (just under 500 minutes per week) in the standard care group.

The researchers will next explore whether exercise during chemotherapy protects against heart disease, for which women treated for breast cancer are at higher risk.

These study results would likely also apply to people with other types of cancer. A meta-analysis by the POLARIS (Predicting Optimal Cancer Rehabilitation and Supportive Care) consortium of 34 clinical trials with a total of more than 4,300 patients was also presented at the meeting. This analysis showed that exercise significantly reduced fatigue, regardless of the type and stage of cancer or patient characteristics such as sex and age.

“In the past, patients were often told to rest and reduce their physical activity during treatment, but we now know that exercise is both safe and highly beneficial,” said Timothy Gilligan, MD, of the Cleveland Clinic Taussig Cancer Institute, who moderated an ASCO press webcast about the research. “As this study shows, exercising during cancer treatment can also make a significant impact on survivors’ health and quality of life over the long term. As physicians, we need to do more to help motivate our patients to exercise both during and after treatment.”

Another study presented at the conference looked at exercise for women with breast cancer who underwent removal of lymph nodes near the breast, where cancer often spreads.

Lymph node dissection done in conjunction with a mastectomy or biopsy usually removes either so-called sentinel lymph nodes closest to the tumor or a larger number of axillary nodes around the breast and underarm. When lymph nodes are removed or damaged, fluid doesn’t drain properly and can build-up in tissues and cause swelling, known as lymphedema. This may lead to loss of arm movement that can last for months or may even be permanent.

Electra D. Paskett, PhD, of Ohio State University Comprehensive Cancer Center in Columbus and colleagues reported findings from the Lymphedema Education and Prevention study, which enrolled 568 women at more than 40 sites in the United States.

Participants were randomly assigned to either an education-only group, which received information about lymphedema symptoms and risk reduction strategies, or an education and exercise group that also participated in stretching and breathing exercises guided by a physical therapist. The women were asked about their arm range of motion (very little, about half, nearly full, overhead or full) before surgery, soon after surgery and 12 and 18 months after surgery.

“Most women who have had lymph node dissection get an instruction sheet on exercise after they are discharged from surgery but little else,” Paskett said in an ASCO press release. “As a breast cancer survivor myself who experienced swelling after surgery, I thought it was important to try to determine if women were receiving adequate follow-up to deal with certain health issues, including the loss of the range of motion in their arms.”

“We hope this study brings awareness to the need to follow up with women who have had lymph-node surgery and experience range of arm motion problems as a result,” Paskett said. “Exercise certainly helped most women quickly get back their full range of arm motion, but because most health insurance plans do not cover this type of intervention, there has been little effort to try to find remedies that are effective.”

“Compared to the general population, childhood cancer survivors have an increased risk for obesity and metabolic syndrome, conditions that can lead to heart disease, stroke and diabetes, so it is really important that they are physically active,” said Carrie R. Howell, PhD, of St. Jude Children’s Research Hospital in Memphis. “By intervening in this young age group, we hope to help kids develop healthy exercise habits for life.”

This pilot study included 97 adolescents (ages 11 to 15) with any type of cancer who were no longer receiving treatment; a quarter had acute lymphoblastic leukemia. Just over half were girls and 80 percent were white. At study entry, they were physically active less than an hour a day.

Participants were randomly assigned to a web intervention group or a control group. Everyone received educational materials and wore an activity monitor. Those in the web group connected their monitors to a computer each week, logged their activity on a website and received rewards (such as T-shirts, stickers or gift cards) if they reached specified thresholds. Physical fitness, neurocognitive function and health-related quality of life were assessed at the beginning and end of the study.

Adolescents who used the web app increased their moderate to vigorous physical activity by about five minutes a week on average, while activity in the control group fell by about 24 minutes, Howell reported. Fitness (grip strength and number of push-ups and sit-ups), verbal fluency and quality of life all improved in the web group, while no changes were seen in the control group.

“This study shows that online tools can be an excellent way to motivate young people with cancer to be more active,” Gilligan said. “We know that exercise brings a wide range of benefits. It improves heart health, reduces fatigue and helps control weight—all of which are important after cancer treatment.”