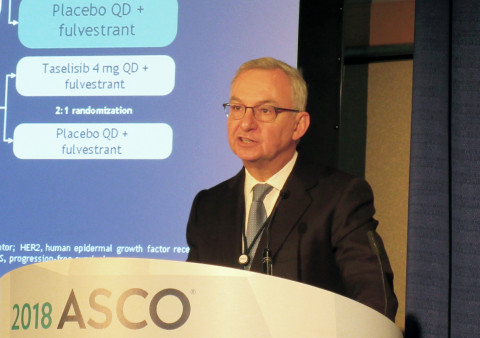 Taselisib and alpelisib improve progression-free survival, but side effects are a concern.

Medications that interfere with the PI3K cell growth pathway offer a potential new approach for advanced breast cancer. Research presented at the American Society of Clinical Oncology (ASCO) annual meeting in June showed that one of these drugs, taselisib, modestly delayed disease progression but often caused intolerable side effects. However, alpelisib, a related drug with a narrower target, may be better tolerated, according to an announcement this week from Novartis.

Taselisib and alpelisib were both tested in women with hormone-receptor-positive, HER2-negative advanced breast cancer with PIK3CA tumor mutations. Both are taken as once-daily pills in combination with the estrogen-blocking medication Faslodex (fulvestrant).

Breast cancer is classified by the kind of receptors it expresses. A majority of breast cancers are hormone receptor positive, meaning tumors carry receptors for estrogen or progesterone; treatment usually includes hormone-blocking drugs. About 20 percent of tumors overexpress HER2 (human epidermal growth factor receptor 2) and can be treated with HER2 inhibitors like Herceptin (trastuzumab). Triple-negative breast cancer doesn’t express any of these receptors and is more difficult to treat.

PI3K inhibitors work against cancer with mutations in the PIK3CA gene, which occur in about 40 percent of hormone-receptor-positive advanced breast tumors. The gene encodes instructions for making a piece of the phosphoinositide 3-kinase enzyme, part of a signaling pathway known as PI3K/AKT/mTOR that plays a role in cell growth and metabolism.

PI3K is made up of subparts, or isoforms. Taselisib mainly targets the alpha isoform (the one affected by the PIK3AC mutation), but it also has some activity against the delta and gamma forms. Alpelisib has narrower activity against the alpha isoform, which is expected to result in fewer side effects. Two other PI3K inhibitors, Zydelig (idelalisib) and Aliqopa (copanlisib), are already approved for lymphoma and leukemia.

Baselga reported that taselisib produced a two-month improvement in progression-free survival, meaning patients were still alive without worsening of disease (7.4 months with the combination versus 5.4 months with Faslodex alone). The likelihood of disease progression was 30 percent lower and the overall response rate, meaning complete or partial tumor shrinkage, more than doubled (28 percent versus 12 percent) in the taselisib group. These differences were statistically significant, suggesting they probably were not attributable to chance alone. Overall survival data are not yet available.

However, taselisib was associated with more side effects. Serious adverse events were reported by 32 percent of participants in the taselisib group compared with 9 percent in the Faslodex-only group. The most common side effects in the taselisib group were diarrhea—reported by 60 percent—and elevated blood sugar (hyperglycemia). Women taking taselisib were much more likely than those taking Faslodex alone to stop treatment because of side effects (17 percent versus 2 percent). Baselga attributed the gastrointestinal side effects to taselisib’s unintended activity against the PI3K delta and gamma isoforms.

“We now know that it’s possible to target this common breast cancer mutation, and it’s heartening to see that a new therapy can provide some benefits to women with advanced breast cancer,” said ASCO expert Harold Burstein, MD, PhD, of Dana-Farber Cancer Institute in Boston. “However, because the treatment has side effects, doctors will have to weigh its benefits and risks with their patients.”

But doctors and patients are unlikely to have that opportunity. After the results were presented, Genentech announced that, given the drug’s “challenging safety profile,” it would not seek Food and Drug Administration approval of taselisib for breast cancer.

Another PI3K inhibitor with broad activity, buparlisib, also showed a small progression-free survival benefit in Phase III studies but has largely been abandoned due to unacceptable side effects.

Similar to the SANDPIPER trial, SOLAR-1 compared the PI3K inhibitor plus Faslodex versus Faslodex alone in postmenopausal women—and a few men—with hormone-receptor-positive, HER2-negative advanced or metastatic breast cancer with PIK3CA mutations. Participants had experienced disease progression despite the use of an aromatase inhibitor with or without a CDK4/6 inhibitor.

Novartis did not provide detailed efficacy or safety results, saying only that adverse events were “generally consistent” with those observed in previous studies. The findings have not yet been presented at a scientific conference or published in a medical journal.

The press release said full study results would be submitted to an upcoming medical conference and the company would start discussions with regulatory authorities worldwide.

Click here to read the Novartis press release about alpelisib.