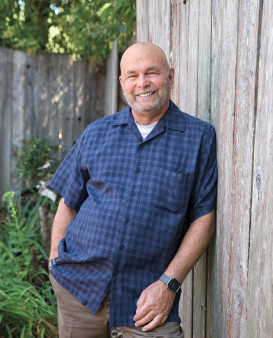 As a survivor with Stage IV non-small-cell lung cancer, Don Stranathan of Santa Rosa, California, participated in an online lung cancer community and responded to comments posted by other members. So when a patient from New York, Penny Blume, asked for advice about nutrition, he replied.

The two continued their conversation by text message. Although they were on opposite sides of the country, they soon developed a friendship. “For the next few months, we chatted every day,” Stranathan says.

Blume, who had Stage IV small-cell lung cancer, came to visit him. Their relationship grew. and they took turns flying from one coast to the other.

Stranathan was involved in lung cancer advocacy to bring attention to the need for more research and better understanding of a disease that causes more than 400 deaths in the United States every day. During his visits with Blume, the two attended advocacy events together, including a national conference for people with lung cancer.

With her condition worsening, Blume moved to California in October 2013. Stranathan was stable on treatment at the time and committed himself to taking care of her in his home. During her last weeks, Blume’s sister and children came to help. “We all took turns caring for Penny round-the-clock,” Stranathan says.

“The last two promises I made to Penny were that I’m going to continue to advocate for lung cancer research and awareness and that I will continue to live life to the fullest,” says Stranathan, who is now 66 and retired.

Since then, Stranathan has experienced lung cancer progression and treatment side effects. He has been treated with radiation, chemotherapy, targeted therapy and immunotherapy, changing treatments several times as they stopped working or proved too hard to tolerate.

In January 2018, almost nine years after he was first diagnosed, Stranathan began a three-drug combination treatment regimen in a clinical trial known as KEYNOTE-189. The regimen included the immunotherapy Keytruda (pembrolizumab) and two chemotherapy drugs, Alimta (pemetrexed) and carboplatin. By April, his tumors had shrunk by 50 percent.

After four infusions, Stranathan stopped taking carboplatin. But after his tenth treatment cycle, a CT scan showed some minor disease progression in his hilar lymph nodes and he added it back.

“I’m on my thirteenth infusion and doing well,” he says. “The main side effect for me is minor fatigue, but it’s much easier than chemotherapy alone.”

Stranathan goes to spin class regularly and enjoys mountain biking, but he considers advocacy his full-time occupation. The hardest part for him is seeing young people die of lung cancer. “That’s what motivates me to advocate,” he says. “A lot of people are getting cut short of living a full life.”

His advocacy work connects him to medical experts and patients, enabling him to learn about the latest therapies through both scientific evidence and personal reports. He participates in medical meetings and serves as a patient adviser for lung cancer organizations, health care societies and hospitals. He is a consumer reviewer for the Department of Defense lung cancer research program and he moderates several online discussion groups.

“I meet some of the top lung cancer surgeons and oncologists,” Stranathan says. On breaks during conferences and meetings, “I bug ‘em for information. I question everything I can,” he adds. When the expert speaking at one event needed a ride to the airport, Stranathan immediately volunteered. “The whole time, I was asking him questions about treatment,” which the clinician readily answered, he recalls.

That information gathering helps him suggest questions for patients to ask their doctors. It also prepares him to talk with his own oncologist after the CT scans he gets every three months. “When the scan results are good, I say, ‘That’s great, but what if I had progression now? What would you recommend based on what’s available for my next treatment option?’”

He also tells his doctor about what he has heard or read. “That way, I know that we’re both on the same page,” he says. “I always have my next plan in order.”

Stranathan wasn’t always so empowered about his own care. He had a chest X-ray back in 2006 that showed a suspicious lesion in one of his lungs. The doctors said it could be scar tissue from previous pneumonia and gave him the option to monitor it through watchful waiting. He agreed.

Instead, when he was finally diagnosed in 2009, the disease had spread.

Now he’s dedicated to helping other patients become better informed. He urges people to “not bury your head in the sand” and avoid getting answers when they have a lung problem, or delay getting help for side effects because they fear being switched off of an effective therapy.

He advises those who are newly diagnosed or looking for new treatments to known their cancer stage and to find out what genetic changes or mutations might be in their tumors, which can show which treatments are likely to work.

“I will not give you medical advice,” he says. “I will give you the questions you need to have answered by your oncologist.”

Stranathan has talked with members of the U.S. House of Representatives and the Senate to make the case for more funding of lung cancer research. He works with several patient support organizations including the Lung Cancer Alliance, Bonnie J. Addario Lung Cancer Foundation and the LUNGevity Foundation, as a member of its Survivor Advisory Council. “The community itself is your own best resource,” he tells others diagnosed with the disease.

All of his advocacy efforts benefit from his nine years of perspective as a patient. He now sees progress beginning to take hold.

“We’ve come a long way,” he says. “When I started doing lung cancer advocacy, most of the patients were too sick or already had their wings,” meaning they had died. “Now I know multiple people that have over five years with Stage IV lung cancer. And I have a lot of friends that are surviving 10 to 15 years with Stage IV cancer. So there definitely is hope.”

Click here to read about the stigma of lung cancer.

Click here to learn more about immunotherapy for lung cancer.

Editor’s note: “Don passed away on February 1 after 10 years and 8 months of living with stage 4 lung cancer,” his sister Carol Lendle informed us in March, 2020. She added, “He regularly shared your Cancer Health magazine and lived to encourage others in their cancer journeys.”