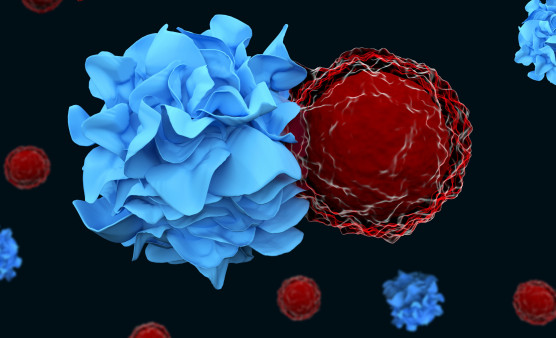 The personalized vaccine was associated with a 45% lower risk of death in a real-world study.

“Based on our analysis of these real-world data, men with metastatic castration-resistant prostate cancer who had immunotherapy added to their treatment regimen had a significant reduction in the risk of death at three years, regardless of the sequencing,” lead study author Rana McKay, MD, of Moores Cancer Center at the University of California, San Diego," said in a Dendreon press release.

Provenge, developed by Dendreon, was the first approved cancer vaccine. It involves collecting a sample of a patient’s white blood cells, exposing the dendritic cells to tumor antigens in a lab and reinfusing the trained immune cells back into the body. It targets prostatic acid phosphatase, a protein found at high levels in most prostate tumors. Dendritic cells present these proteins for recognition by T cells, the immune system’s main cancer-fighting soldiers.

The 2010 Food and Drug Administration approval of Provenge was supported by clinical trials showing that the vaccine prolongs survival, though the effect was modest. The IMPACT study enrolled 512 men with asymptomatic or minimally symptomatic metastatic prostate cancer that did not respond to testosterone-lowering hormone therapy (known as being castration resistant). They were randomly assigned to receive Provenge or a control vaccine containing untrained immune cells.

The median overall survival was 25.8 months in the Provenge group versus 21.7 months in the control group, a difference of 4.1 months. While this difference was statistically significant, meaning it was probably not driven by chance, some questioned the vaccine’s clinical significance. Yet while the survival benefit was only a few months, the overall survival rate with Provenge versus the control vaccine was significantly higher at the three-year mark, 32% versus 23%, representing a 38% decrease in the risk of death.

Now, a much larger study sheds further light on the benefits of Provenge in real-world use. This is a retrospective analysis, meaning participants were not randomly assigned to different treatments and followed over time to see how well they did. Because they were not randomized, it’s possible that those who received Provenge were at different stages of disease or had more or less aggressive cancer.

The analysis included medical and pharmacy claims data for 6,125 previously untreated men who filed an initial claim for treatment in 2014 and were enrolled in Medicare through 2017 or until their death. About 85% were white; almost all were 65 or older, with an average age of about 78. Altogether, the participants used more than 150 different permutations of therapy. About a third had a prescription for opioids, suggesting they were being treated for cancer-related pain. Medical record data about cancer stage and other factors were not available in the claims database.

Looking at the initial treatment comparison, the median overall survival was longer for men who used first-line Provenge (35.0 months) than for those who started with oral therapy (21.0 months). The survival advantage of 14.0 months reflects a 43% reduction in the risk of death.

In the comparison of use at any time, those who ever used Provenge had a median overall survival of 35.2 months, compared with 20.7 months for those who never used the vaccine. This survival advantage of 14.5 months translates to a 45% lower risk of death.

The three-year survival rate was higher among men who used Provenge as a first therapy (49%) or at any time during treatment (48%), compared with those who used oral medications first (29%) or who received oral therapy at any time but did not use Provenge (28%). This suggests that the benefit of Provenge may be similar regardless of whether it is used as a first treatment or later.

“Many of us who specialize in advanced prostate cancer have long suspected that layering multiple life-extending therapies will extend survival for men with metastatic castration-resistant prostate cancer,” McKay told Cancer Health. “These real-world data offer evidence that leveraging complementary mechanisms of action may hold the key to helping men with prostate cancer live longer.”