Psychologist Seth Axelrod, PhD, has metastatic bone cancer—and a unique set of therapeutic skills that help him live with it.

Every person living with cancer has a story about the life-altering effects of their diagnosis. Each story is unique but also universal. One moment, you’re living life as you’ve defined it—working, socializing, taking care of your family, doing laundry, paying bills, planning vacations. The next moment, you’ve entered Cancerland, a bewildering alternate reality filled with medical appointments, hours of online research, confusing terms, mind-numbing risk-benefit calculations, difficult treatments, pain, health insurance battles, financial challenges and an emotional roller coaster of fear, worry, sadness, anger and grief. Coping with it all often becomes its own full-time job.

That theme of normalcy turned upside down unfolds in the story of Seth Axelrod, PhD, too. But he’s had an edge in dealing with the emotional challenges of his own complex, difficult and often-changing cancer journey: He’s a leading educator and practitioner of a form of psychotherapy that has been scientifically shown to help people experiencing extreme emotional stress find a path toward balance. 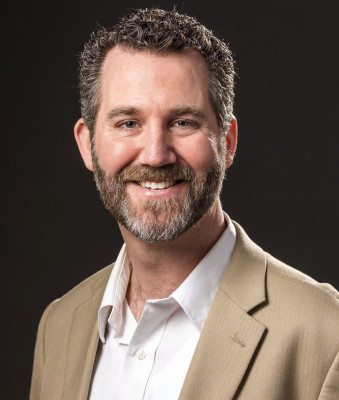 It’s called dialectical behavioral therapy (DBT). An evidence-based form of psychotherapy, DBT combines coping skills derived from cognitive behavioral therapy with concepts of mindfulness and acceptance derived from Zen Buddhism—minus any religious overlay. Since his diagnosis, Axelrod—an associate professor of psychiatry at Yale University School of Medicine, DBT therapist and head of DBT services at Yale New Haven Psychiatric Hospital—has learned new ways to use its powerful tools for himself.

The Four Skill Sets of DBT

At the core of DBT training is the development of four sets of behavioral skills with a trained therapist, according to the University of Washington’s Behavioral Research and Therapy Clinics:

DBT aims to promote a balance between dialectical opposites: acceptance of what is, on the one hand, and openness to change, on the other.

When cancer interrupted the flow of their lives, Axelrod and his wife, Rebecca, were raising their daughter and son (then 13 and 11), singing together at various venues and actively participating in their synagogue.

The first sign of Axelrod’s cancer occurred in November 2012, when he was 42 and experienced intermittent, shock-like pain on the right side of his back and chest. His doctor noticed a protruding rib and sent him to a physical therapist, but the shocks became more debilitating. Over several months, Axelrod saw a series of doctors, including a chiropractor, an osteopath and a physiatrist. Finally, after leading a weeklong DBT training and having trouble standing during the day (“I was contorting myself”) and sleeping at night, he had two MRIs and a biopsy. It was October 2013—almost a year since his pain had started.

The diagnosis: chondrosarcoma, a rare cancer that originates in bone. The tumor in his spine was lodged beneath and included the displaced rib. With major surgery and advanced proton radiation therapy, a cure was possible.

Even so, the floor fell out from under Axelrod when he received the cancer diagnosis. And there was the sheer terror of the surgery, even though it came with the glimmer of a turning point.

One of the DBT skills he teaches and practices is “radical acceptance”—a concept based in mindfulness that involves acknowledging the reality you are confronting and accepting life as it is, rather than fighting or resisting it.

In episode 64 of the podcast To Hell and Back, one of four episodes he participated in with psychiatrist and DBT expert Charles Swenson, MD, who is on the faculty of the University of Massachusetts School of Medicine (see “Getting Started: DBT and Cancer” below), Axelrod explained that before the diagnosis, the only thing to accept was the uncertainty of his painful condition. “But at that point, this horrible thing was labeled, and I could work at radically accepting having a cancer diagnosis. On that day, I could start making a turn from crisis mode to acceptance,” he explains.

That experience was the first of countless instances in which Axelrod’s DBT skills have helped him manage life with cancer with equanimity, grace and resilience. His surgery to remove the original tumor, in March 2014, was a complicated 22-hour marathon staged over two days, the second of which was his 44th birthday. (“This year I am the cake,” he noted on Facebook, with characteristic humor.) Only Rebecca knew of his terror, going into the surgery, that he might not survive. Using DBT, he practiced acceptance, telling himself, I’m where I need to be; this is something I can go along with. It’s OK to be anxious. Afterward, he endured a long and arduous recovery but felt buoyed both by his family’s support and, after a series of clean three-month scans, by the possibility that his cancer journey might be ending.

However, a scan in December 2015 revealed a lung metastasis. “That was another turn of shock and acceptance,” says Axelrod. In all likelihood, he found out, there would be more, but their slow progression would allow time to reassess and explore treatment options.

In episode 66 of To Hell and Back, Axelrod spoke of going on a silent mindfulness retreat soon after receiving the news of that first metastasis. In the midst of struggling with the diagnosis and the awareness of his own mortality, he had a kind of epiphany, where he could see the cycles of life and death and how things are connected, and he experienced being part of a much larger cycle. “It’s like the astronauts in space who see Earth for the first time and see its problems differently,” he says. That awakening—and the recognition that although he doesn’t know the outcome, the odds aren’t great—has led him to think carefully about the kinds of commitments he makes and how they contribute to the lives of others.

Becoming His Own Advocate

DBT isn’t just about acceptance, however. It’s also about “interpersonal effectiveness”—asking for what you want and need. Over the past four years, Axelrod has continued treatment via clinical trials, including targeted therapies and a personalized cancer vaccine combined with immunotherapy. DBT has helped him with those decisions too. “Besides accepting the lack of control, not knowing, there’s also being an active self-advocate, not just for getting support but also for health care, learning about the treatments, speaking with doctors and dealing with insurance companies,” he says. “I’m satisfied with my efforts to communicate effectively with providers, to do my own problem-solving. I’ve also been able to share with the chondrosarcoma community and connect them to clinical trials. Those things—communication, assertiveness, problem-solving—also come from DBT skills.”

Despite increasing fatigue, ongoing pain and end-of-day crashes from dwindling energy, Axelrod has continued to work, although since 2016, he’s down to an 80% workload with 20% long-term disability. Recently, the COVID-19 pandemic has led to his self-isolation because the three lung surgeries and three bouts of radiation he’s had have rendered him especially vulnerable. “Suddenly, it’s almost as if life is adjusting to my special needs, because I can get more done spending time in my chair than if I’m driving around in my car,” he says. “It’s really odd, but I think I can be more productive in this new format that the world is falling into.

“My experience going through treatments and going through the cancer, it’s absolutely been a roller coaster. There have been very few months where I haven’t run into something that’s dropped the ground out from under me,” Axelrod says. And he misses some things, such as singing, an activity that now aggravates his pain but always brought him joy. “I think the last time I sang publicly was the summer of 2019, with a small men’s chorus singing ‘The Star-Spangled Banner’ at the opening of a minorleague baseball game.”

Big picture, he has no bitterness, accepting that his cancer is a natural trauma—no one is to blame—and accepting the cards he’s been dealt. This, too, is a gift from DBT, he explains: being able to see and step back, while being open. “Radical acceptance of cancer is so many things, but one is as simple as ‘I am a person with cancer,’” Axelrod says. “It takes time, but you can ease into it. Eventually, you can go from ‘Why me?’ to ‘Why not me?’”

Getting Started: DBT and Cancer

Although dialectical behavioral therapy (DBT) for people with cancer is new, using it to help individuals cope with cancer’s emotional highs and lows is growing. Here are some ways to learn more: 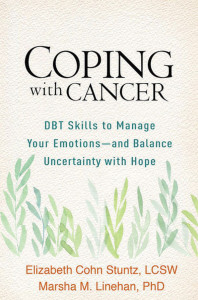 “Coping with Cancer”Courtesy of Guilford Press

Coping with Cancer: DBT Skills to Manage Your Emotions—and Balance Uncertainty with Hope (Guilford Press), due to be published in January 2021, is written by Marsha Linehan, PhD, ABPP, who developed DBT, and psychoanalyst and cancer survivor Elizabeth Cohn Stuntz, LCSW. It provides coping strategies to reduce overly intense feelings both by changing how you think and by modifying your body’s reaction. You can reduce fear and anxiety, for example, by recognizing that it’s possible to be both scared and hopeful—two emotions that might be considered dialectical opposites—while also calming your nervous system with breathing and muscle relaxation techniques. The book includes many stories of people touched by cancer and illustrates ways to make effective decisions, communicate with friends, family, colleagues and medical professionals and live meaningfully. It can be preordered at Guilford.com.

To Hell and Back is a podcast developed by psychiatrist and DBT expert Charles Swenson, MD. (Check out episode 64, with Axelrod.) charlieswenson.com/podcasts

Behavioral Tech, a website by Linehan, is a great introduction. behavioraltech.org

DBTSelfHelp, developed by an individual who benefited from DBT, has a variety of resources. www.dbtselfhelp.com

Editor’s note: Seth Axelrod died on Tuesday, January 25, 2022. He was 51. Cancer Health is deeply grateful for his generosity in sharing his story with our audience. 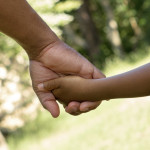 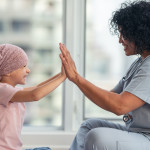